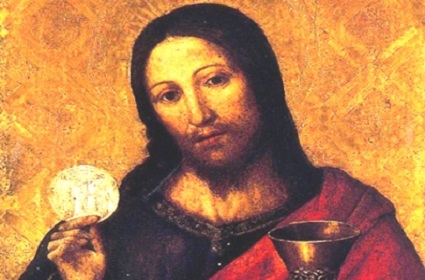 Every now and again one encounters the objection that the Eucharist cannot be the true flesh and blood of Jesus Christ because to eat it would constitute cannibalism. This is an interesting argument, and if the person you are talking with actually accuses Catholics of practicing cannibalism, then it demonstrates that he at least understands the seriousness with which we say that Jesus is truly present in the Blessed Sacrament, even if he does get the particulars wrong; at least he understands that we take the phrase “Body and Blood” seriously.

So, what do we respond when somebody attacks the Holy Eucharist on the ground that to eat the flesh and drink the blood of Jesus would be cannibalism?

Let us begin with the Old Testament. Leviticus 17:14 seems to categorically prohibit the eating of flesh with the blood or the drinking of the blood of any creature:

If this commandment applies (so runs the argument) the Eucharist cannot truly be the Body and Blood of our Lord, for to consume it would be against what God commanded in Leviticus, and thus God is made to contradict Himself.

There are two explanations to this dilemma, one satisfactory, one sufficient but less so. We shall look at the less satisfactory of the two defenses to this charge first.

This defense I originally heard from Dr. Scott Hahn (I do not recall where exactly I heard him give this explanation, but I believe it was on a radio call-in show). According to Dr. Hahn, the response to the charge of cannibalism is “Guilty as charged!” If I am remembering it correctly, Hahn admits that eating flesh and blood is cannibalism, affirms that we eat the Body and Blood of our Lord, and therefore concludes that the Eucharist truly is cannibalism. What else could it be if the Eucharist is truly the Body and Blood of our Lord? Cannibalism means eating human flesh and drinking human blood, which the Eucharist is: consuming the flesh and blood of a Divine Human. So, according to this argument, it is a type of cannibalism.

What about the fact that Leviticus specifically says that whoever does this shall be “cut off” from God’s covenant? If it is cannibalism, then are we not “cut off”?

This explanation is serviceable, but it is novel way of understanding the question.

Explanation 2: The Form of Flesh

This brings us to our second defense, which begins with the definition of what cannibalism entails.

But now let us posit another scenario: Say that a shark eats a man. The unfortunate fellow is digested and becomes part of the shark. Then, a week later, some fishermen catch the shark, kills it, and turn it into shark steaks. Then the fishermen eat the shark. Are they committing cannibalism? After all, they ate the shark who ate the man, implicitly eating the man who was eaten by the shark. Is this cannibalism?

Similarly, in the Eucharist, we eat the flesh and blood of Jesus Christ under the forms of bread and wine. No flesh is consumed in the form of flesh (i.e., true flesh and blood is eaten, but not in a carnal sense). Therefore, flesh and blood are truly consumed, but there is no cannibalism.

It could be objected that the argument of flesh under the form of flesh only applies when a third party is present to negate the act of cannibalism: the shark eats the human flesh, and then someone eats the shark. However in the Eucharist, bread and wine become flesh and blood, those participating eat it directly (without the intermediary of a third party, a “shark” who removes us one degree from cannibalism).

Thus, the argument that the Eucharist is cannibalism does not hold weight.