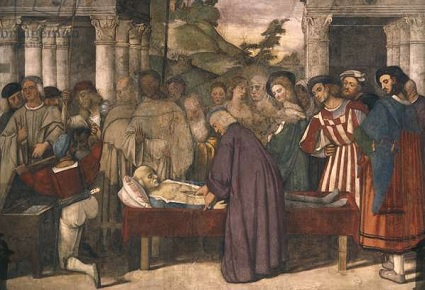 St. Anthony of Padua (1195-1231) was a wonderworking saint of the Franciscans who was enormously popular in northern Italy during the late Middle Ages. His cultus was especially strong in Padua, the city with which he is always associated. One of the most popular stories of St. Anthony to come out of Padua is that of the miser’s heart. The story does not appear in any official chronicle of the saint’s life; it first appears in the vita of Sicco Ricci Polentone composed around 1445. Dating, as it does, from 214 years after the saint’s death, the story likely reflects more of a pious legend than actual history. Nevertheless, it was of such enormous popularity as to be depicted in a grand bronze relief by Donatello for the front altar of St. Anthony’s basilica in 1447.

Rather than paraphrase, let us quote Polentone:

In Tuscany, which is a large province in Italy, Saint Anthony (as was customary) happened to attend the funeral of a rich and wealthy man. Suddenly, moved by the fervor of the spirit, he exclaimed, “The dead man should not be buried in a holy place, but outside the city walls, like a dog, since his soul is damned to hell and he does not have a heart in his body, for in the words attributed to the Lord by the holy evangelist Luke, ‘Where his treasure is, there also is his heart.'”

On hearing this, as is easy to believe, everyone became very excited, and various opinions were voiced. Finally, those who had been ordered to inspect the body opened up his chest. They did not find the heart inside it, but rather, as the saint had predicted, in the place where his money was. For this reason, the city praised both God and the saint, and the dead man was not buried in the tomb that had been prepared for him, but dragged to the countryside and buried like an ass. (1)

The Donatello relief captures the shock of the saint’s revelation and the public astonishment elicited by the discovery of the missing heart. As historian of science Katharine Park points out, it is ironic that the relief is located only blocks from the university where, in the following century, the great anatomist Andreas Vesalius would perform most of his dissections. (2)