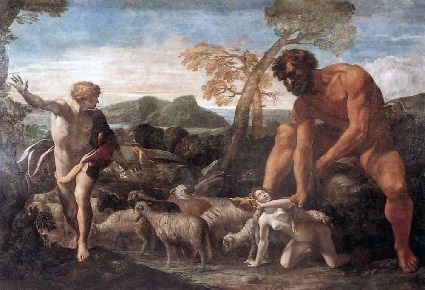 In the Old Testament, Genesis 6 begins with a famously mysterious passage stating that the sons of God married the daughters of men and begat Nephilim, who were “the mighty men who were of old, the great men of renown.” (Gen 6:4) Who were these Nephilim? It depends on what one makes of the “sons of God” who begat them. Traditional Catholic exegesis, as well as rabbincal tradition, says that the “sons of God” are a type of angel, the Grigori, “Watchers”, who mated with human women; contemporary scholarship is more apt to suggest that the sons of God refer to the descendants of Seth, the third son of Adam. Seth was Adam’s son “in his own likeness, after his image.” (Gen 5:3), and the “sons of God” could be the righteous descendants of Seth who in marrying “the daughters of men” take to wives the wicked seed of Cain.

It is my opinion that the traditional view if correct here, as it is the only one that makes any sense if we are to understand the literal sense of Scripture when it presents them as giants. It is not the purpose of this essay to explore the identity of the sons of God; rather, we will examine the Biblical texts relating to their offspring, the famous Nephilim.

The Nephilim, the “mighty men of old”, are the result of the union of the sons of God and daughters of men. The Hebrew word nephilim is greatly disputed as to the actual meaning – it is commonly believed to have stemmed from the Hebrew verbal root, n-ph-l, meaning fall. The word nephilim has been taken to mean either “fallen,” as in sinful or apostate, or in an active sense “one who causes others to fall.” This interpretation, however, is very questionable in light of the traditional interpretation, which says that the word Nephilim means “giants”. This raises the fundamental question of whether the Bible asserts that “giants” truly existed, and if so, were these the Nephilim?

Nephilim are referred to only one other time in the Bible, when Israelite spies are sent by Joshua into Canaan to scout out the land and its inhabitants. The spies returned and “brought to the sons of Israel an evil report of the land which they had spied out, saying “…All the people that we saw in it are men of great stature. And there we saw the Nephilim (the sons of Anak, who come from the Nephilim); and we seemed to ourselves like grasshoppers, and so we seemed to them.’” (Josh 13:32-33) The double use of the word Nephilim, as referring to the inhabitants and to a people of which they were part, suggests that Nephilim is a broader term, used to describe a larger people or race of people.

Elsewhere in the Bible, a race of people called the Anakim are mentioned, also sons of Anak (like the Nephilim) “a people great and tall.” (Deut. 9:2) Thus Nephilim seems to be general term for a race of giants in the Bible. Nor are the Nephilim and Anakim the only giants mentioned; also in Biblical narratives appear the Zuzim/Zamzummin, the Rephaim, the Emim, and some of the Amorites. The Zamzummin and Rephaim are discussed in Deuteronomy 2:20-21 as “a people great and many, and tall as the Anakim.” A few verses earlier (Deut. 2:10-11) the Emim are described as well as “a people great and many, and tall as the Anakim; like the Anakim they are also known as Rephaim, but the Moabites call them Emim.” The Amorites are depicted as giants in Amos 2: 9-10, where the Lord says “I destroyed the Amorite before them, whose height was like the height of the cedars, and who was as strong as the oaks.” This language could be figurative, but is very possibly literal because of the account of the defeat of Og of Bashan, king of the Amorites, recounted in Deuteronomy: “For only Og the king of Bashan was left of the remnant of the Rephaim; behold, his bedstead was a bedstead of iron…nine cubits was its length, and four cubits is its breadth, according to the common cubit.” (Deut. 2:11) The common cubit being about 18 inches, this translates as a bed which was 13.5 ft. long by about 6 ft. wide. Thus, regardless of what we think of the sons of God and the daughters of men, it seems clear that the Scriptures teach that these Nephilim and their descendants were literal giants, on average between 9 feet and 13 feet tall, based on the heights given for Goliath and Og of Bashan.

These giants are described as the offspring of sons of God and daughters of men, as earlier stated, but the genealogies of these superhuman races show them to be descended from a specific man: Ham, son of Noah. According to Genesis 10:6, Ham begat four sons: Cush, Egypt (Mizraim), Put, and Canaan. Cush was the father of Nimrod: “[Nimrod] was the first on earth to be a mighty man.” (Gen 10:8) And thus we have the first “mighty man of old” described in the beginning of Genesis 6. Mizraim, the second son, was father to seven sons, the sixth of which was “Casluhim (from whence came the Philistines).”

Perhaps the most famous of all Biblical giants is Goliath of the Philistines, whose height was six cubits and a span, about 9.5 feet. (1 Sam 17:4) There are various theories put forward that attempt to explain the presence of Nephilic blood in the house of Ham, usually positing that Ham’s wife actually bore children by the Grigori and not by him, or else that the Grigori came down and cohabited with women of Ham’s line after the Flood. For more on these various theories, I recommend this video by Dr. Michael Heiser. Dr. Heiser is a Protestant, but his thinking on this question is exactly in line with Catholic and rabbinic tradition, and his explication of the Hebrew proves the point forcefully.

One point Dr. Heiser stresses is that the presence of the Nephilim and the corresponding races is related to God’s command to wipe out certain cities among the Canaanites. The Anakim are only described as sons of Anak, son of Arba, but in Joshua is found the narration of the destruction of the Anakim by Joshua: “And Joshua came at that time, and wiped out the Anakim…there were none of the Anakim left…only in Gaza, Gath, and in Ashdod did some remain.” (Josh 11:21-22) 1 Samuel introduces the champion of the Philistines as “Goliath, of Gath” (1 Sam 17:4), one of only three remaining homes of the Anakim. Canaan, the fourth son of Ham, became the father of the Amorites (Gen 10:15), another of the giant races. Finally the Zuzim/Zamzummin are spoken of in a rebellion against Chedorlaomer, king of Elam: “Chedorlaomer…subdued the Rephaim in Ash’teroth-karna’im, the Zuzim in Ham, the Emim in Shah’veh-kir”iatha’im…and also the Amorites who dwelt in Haz’azon’ta-mar.” (Gen 14:5-7) Again, Ham and his line are mentioned; the Zuzim live in the land of Ham, the land of the Hamathites, who are descended also from Canaan, son of Ham. (Gen 10:15)

The word Nephilim, as aforesaid, is taken to mean “one who causes another to fall” or “one who has fallen,” or sometimes simply as “giant.” The former meaning fits well with the power of a giant human; however, the other meaning may be relevant as well. In Genesis 9:18-27, Ham “saw his father’s nakedness,” failed to cover his father, and told his brothers, who went into the tent and “covered the nakedness of their father.” (Gen 9:22-23) When Noah awoke, he cursed Canaan, son of Ham, for Ham’s sin. “He also said, ‘Blessed by the Lord God be Shem; and let Canaan be his slave.’” (Gen 9:26) Because of his sin, Ham and all his descendants are cursed and forced to “be slaves” to the descendants of Shem, the Israelites. (Gen 11:10-26) Thus throughout the Bible, the races of giants are defeated and cast out to make way for the descendants of Abraham, the descendants of Shem. This could be seen as the fulfillment of Noah’s curse of Canaan.

In this article, we have examined the various places in the Scripture in which the Nephilim are mentioned and sketched out some very rudimentary ideas about their identity. Next time we will take a more in depth look at who the Watchers, the mysterious fathers of the Nephilim, the “sons of God” who went in to the daughters of men.

Click here for Part 2 of this essay, “Watchers and the Nephilim.”