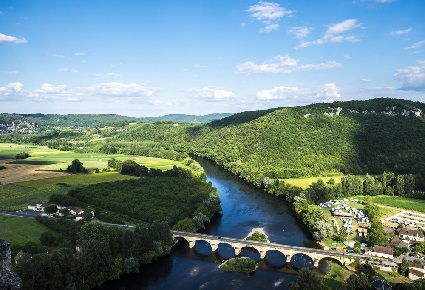 The long reign of the French King Philip Augustus (1180-1223) was chronicled by a monk named Rigord, a physician-monk of the famous Saint-Denis abbey in Paris. Rigord’s historical record of Philip’s reign is the Gestae Philippi Augusti, “The Deeds of Philip Augustus.” The Gestae begins with Philip’s coronation at the end of 1179 and records the events of the king’s reign year by year. In the fourth year of the chronicle (1183) Rigord tells us of an extraordinary religious revival that took place in Aquitaine. The occasion of the revival was a miraculous image of the Virgin Mary that was given to a simple pauper named Durand. The veneration of this image not only brought about the cessation of a war between Count Raymond of St. Gilles and King Alfonso II of Aragon, but also led to a general peace and end to vendettas and blood-feuding across Aquitaine. The movement developed into a confraternity that exercised a pious influence in southeast France for over a generation before regrettably morphing into a revolutionary expression of anti-clericalism. Let us read Rigord’s account of the event, in year 1183 of his Gestae:

But there had arisen over a long time past a great quarrel between the king of Aragon and Raymond, count of St. Gilles, which could, because of the work of the Devil, enemy of humankind, in no way be settled.However, the Lord hearing his poor people complaining over a long period of so great an oppression and affliction, sent them as their savior, no emperor or king, nor any prince of the Church, but a certain poor man called Durand, to whom the Lord is said to have appeared in the city of Le Puy, and to have handed over to him a parchment. On it was the image of the Blessed Virgin Mary enthroned and holding in her hands an image of our Lord Jesus Christ as a child and around the edges was printed words of this nature: “Lamb of God, who bearest away the sins of the world, give us peace”. The princes, greater and lesser, having heard what had been done by God’s will, assembled at Le Puy with their whole followings on the day of the Blessed Mary’s Ascension as was their annual custom. The bishop of that city then with the clergy and people and whole crowd there gathered for the feast day listened intently to that Durand, a poor, humble carpenter, laying down the law in the midst of the populace. He boldly told them of God’s command that they were to restore peace among themselves and showed the parchment with its image of the Blessed Virgin Mary as a sign to everyone.They raised their voice in weeping, admiring the kindness and mercy of God, and swore most readily on the holy gospels the strongest of oaths promising God to observe the peace in every way they could. As a token of the commitment to keep the peace, they made a seal of the Blessed Virgin impressed on lead, placed it over their breasts on white linen hoods like the scapulars of the white monks (Cistercians) and carried it there always as a sign of the compact entered into with him. What is even more amazing, anyone carrying a hood of this kind with the sign could be sure that if anyone had killed the brother of another by any kind of accident and the surviving brother had seen the killer wearing the sign just mentioned, the brother’s death was at once forgiven and he received him (the killer) with the kiss of peace in tears and weeping, took him home and gave him what he needed to eat. Surely one can say that in this place there was fulfilled again the prophecy of Isaiah: “The wolf will dwell with the lamb and the leopard make common cause with the kid; the calf and the lion, the sheep and the bear will graze together and the little child will be a threat to them.” We understand indeed by those beasts that live from violence and on flesh the irreligious men such as homicides and robbers, but by the rest of the grazing animals the gentle and simple people. And of them all the prophet said that Christ ordered them to live together and keep peace. Why so? “Because the land is filled with the knowledge of the Lord” [Isa., xi. 9]. This reconciliation engineered by the man of God was observed most carefully all over Aquitaine for some time.The bishop was Peter of Solignac. Although initially skeptical of Durand, Bishop Peter came to support the movement. Along with twelve associates, Durand established a confraternity known as the “Confraternity of Peace”, but more popularly known as the Capuciati (not to be confused with the Capuchin friars, who were founded much later). They pledged themselves not to swear falsely, not to blaspheme, not to play dice, enter taverns, or wear costly garments, also promised to do all in their power to restore and maintain peace. Members of the Capuciati wore a white hood and a icon of the Blessed Virgin, as Rigord described. The center of the movement was the Church of Our Lady of Le Puy.

Durandus and the Capuciati movement are mentioned in several contemporary sources, such as the Chronica of Gervase of Canterbury, the universal history of Robert of Auxerre, Guiot de Provins satirical history Le Bible, and many others. While most accounts are sympathetic to the movement and portray it as a force for good in the Church and society, a few sources were hostile: for example, Anonymous of Laon says they were motivated by greed and Guiot accuses Durand of bilking his followers out of 200,000 livres.

The Capuciati enjoyed broad ecclesiastical support for sometime, but they eventually ran afoul of both the feudal and ecclesiastical hierarchies. The exact circumstances of their demise are uncertain. It seems that after some time they may have adopted the radical egalitarianism of the Cathars (who were also active in southern France at the time) and became politically revolutionary and anti-clerical. This is all just speculation, as there are no accounts of their latter years; they simply disappear from the historical record. However, the last accounts of them (c. 1218) portray them as revolutionaries. Most historians think they were probably suppressed by the Church, broken up by the secular authorities, or both.

The story of Durandus and the Capuciati can be found in Chapter 25 of Rigord’s “The Deeds of Philip Augustus.”