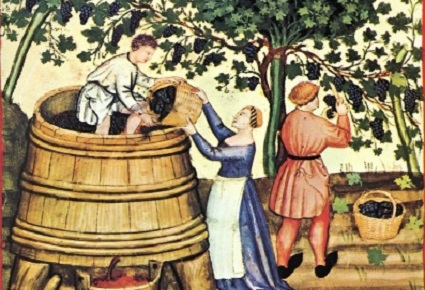 One of the most commonly asserted statements about medieval Catholicism is that the Catholic Church owned one third of all the land in Europe on the eve of the Protestant Reformation. This assertion is not only found in works hostile to the Catholic Church, but also in authors and textbooks sympathetic to Catholicism. It seems like it is one of those points of history that is generally uncontested.

The force of the statement is not in the facts themselves but in what sort of conclusions one draws from them. Both Protestant and laissez-faire economic apologists use this one third number to beat up the Church; the former by arguing that the immense quantities of property owned by the Church demonstrate that she had become too enmeshed in worldly affairs to the neglect of her spiritual mission, the latter by arguing that the tying up of so much property in the hands of an economically unproductive class (i.e., the clerical) hampered the development of a free market. We, being amateur historians and armchair theologians, have neither the erudition nor the time to critically examine whether one third is or is not the most accurate estimate; we do, however, seek to elaborate on the nature of the Church’s ownership of these lands so that all parties can better appreciate what late medieval society actually looked like. In doing so, it should become clear that the Church ownership of property was not the monolithic monopolistic oppressive system of inefficiency it is made out to be. The truth is quite the opposite.

The first thing we have to realize is that there is no such thing as “Church” ownership of land in the monolithic sense. “The Church” as such does not own land in the collective. There are lands held by religious orders and lands held as benefices of a particular diocese or patriarchate; dozens of orders and hundreds of dioceses, each with their own distinct holdings. The Church of Rome had certain lands that belonged to it by ancient custom, as did all the great metropolitan sees. Then there were the poor houses, pilgrims’ inns, hospitals, universities and so forth that were all under some sort of clerical administration but were not under the direct control of any of the aforesaid entities; some may have been private-ecclesiastical partnerships, such as when a wealthy lady founded a poor house and entrusted its administration to an order of religious sisters.

Each of these holdings—from the diocesan benefices to the religious houses to the papal lands to the inns, hospitals, and universities—all had different owners. Consider in the Benedictine Order, the most prolific religious order of the medieval world. Within the Benedictine Order each individual abbey was an autonomous institute. What all this means is that it is meaningless to speak of “the Church” as a monolithic landowner, as if 33% of the wealth was locked up in the hands of a single greedy owner. Medieval Europe was not Bedford Falls and the Church was not Mr. Potter. So we need to change our vocabulary here; rather than speak inaccurately of the Church as the biggest medieval landowner, it is more proper to speak of lands being administered by the clerical class, with the understanding that this class was a complex and multi-layered reality, whose aims were by no mean uniform. It tells us nothing more to say one third of European lands were owned by “the Church” than it does to say sixty percent of United States land is owned by the private sector. “Private sector” can mean anything from residential home ownership to a mom and pop business to a Wal-Mart to huge corporate oil fields. There is a great diversity within the category of private sector ownership, and so it was with clerical lands. Thus, even among clerical lands, we can speak of a real and proper diversity of ownership.

We must consider hospitals under Church patronage, who benefited the poor and the sick and were staffed by religious but also lay volunteers. We must consider cathedral schools, monastic schools, and later the great universities, to whom the entire educated class of Europe owed their learning for over five centuries. We must consider charitable foundations for the saying of Masses. There were bishoprics with all of their associated revenue-generating properties, as well as rest houses on the great roads of travel. There are even traditions of religious associations who built and maintained bridges, a service which benefited all members of society. In the latter Middle Ages, the great banking houses were run by religious orders, especially the Templars, who thus became the bulwark of Europe’s entire credit system, lending even to kings. This is on top of the traditional agricultural abbey with its suffragan villages and farming communities.

When we survey all of the sectors of society who were benefactors of clerical holdings, we see that far from locking up property from “productive” use, the clerical class was carrying out vast and essential public functions. Far from hoarding all the wealth from such enterprises, the vast majority of the benefits for most of these works went to the public. Thus, when we speak of one third of the wealth of the continent being in the hands of the Church, what is really meant is that one third of the surplus values or rents and dues went to some kind of clerical endowment, whether it be a school, bridge, hospital, etc. So the legendary “wealth” of the medieval Church was not some sort of monopoly and land and assets locked up for private extravagance; it was distributed in all manner of public works in an almost infinite variety of uses that benefited every class of society, from the lepers nursed in the hospices to the nobility who sent their sons to learn in the cathedral schools.

Thus one could have a Benedictine abbey in France, perhaps with hundreds of acres of lush farmland and three villages attached to it. Nevertheless, if it was held in commendam, all the revenues of this property would go to some layman to whom they had been committed. The abbey would only see what revenues the lay protector chose to share; often this was but a pittance. Lands held in commendam could not be said to be “Church lands” in any meaningful sense, since they were administered by laymen who also took the benefits therefrom. It is not known how many Church lands were under the commendatory system, but it was not inconsiderable. For example, throughout the late Middle Ages, almost every Cistercian monastery was held in commendam. If we were to understand commendatory properties not as Church lands proper but only in a titular sense, our vision of “Church owned lands” in the Middle Ages changes dramatically.

What do we glean from these observations? That land ownership in the Middle Ages was a very complex thing, and that it is inaccurate to portray “the Church” as a single landowner. Rather, we should see the situation in terms of a variety of essential public and charitable functions being administered by the clerical class—functions whose benefaction was so wide as to encompass a very large swath of society. Simply saying “one third” of all land was held by “the Church” does not do justice to the great diversity of uses, of benefactors, and of the real diversity in ownership that existed in the medieval world, nor does it easily delineate how to classify lands held in commendam, that is lands whose titular owner was clerical but whose administration and revenues were under control of a lay person. Certainly it cannot be argued, as Protestants have, that the Church’s great assets constituted a sort of dereliction of duty. On the contrary, the Church’s assets made possible the greatest works of charity, education and public service the world has ever seen. Nor were these assets “unproductive”; they were put to all sorts of wonderful uses for the public benefit.

Asking “How much land did the Church own in the Middle Ages?” cannot yield a satisfactory understanding of medieval realities because it frames the question incorrectly. While further research is needed to determine if the classical “one third” assessment is factual, this is nothing Catholics need to apologize for. If anything, the world should thank the Church for the manifold blessings and good works it has put its assets to over the years —often free of cost—which is more than we could say for our modern day institutions.