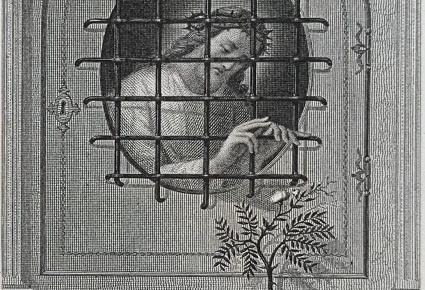 St. Therese of the Child Jesus is one of the most beloved saints of the modern age. But from whence did St. Therese acquire the famous nickname by which she is known the world over, the “Little Flower”? In fact, this nickname came from a holy card in the possession of St. Therese’s sister Pauline.

The holy card in question was title La Petit Fleur Du Divin Prisonnier by the French printing house Letaille, dating from around 1840. The card takes the form of a rectangular diptych with a border of white lace. The cover of the card depicts a sketch of a dark window covered with a prison grate in front of which blooms a flower. The title La Petit Fleur Du Divin Prisonnier (“The Little Flower of the Divine Prisoner”) is written in in a semi-circle above the image. Below the image is a three short paragraphs of pious exhortations.

Opening the card, on the left panel we see the word “JESUS” intertwined with an ornate guilloche design followed by seven further prayers. These prayers were meant to be meditated upon while the viewer looked at the image on the right panel, which depicts Our Lord in prison. It is clear that the prison cell is designed to look like a tabernacle in which the Blessed Sacrament is held in repose. That this is supposed to be a tabernacle is confirmed by the presence of the cross on the stone in front of the prison door, representing the cross over the altar cavity on an altar. The window of the cell is covered by bars, through which Jesus, crowned with thorns, peeks longingly. In front of the cell, from between the stones, a little flower with a single petal has sprung up. Jesus is reaching through the bars with his hand extended towards the blossom. He has two fingers extended, giving the appearance that He intends to bless the flower even while He touches it.

The back cover of the diptych again says “La Petit Fleur Du Divin Prisonnier,” followed by a series of ejaculatory prayers and a lengthy petition to the Virgin Mary.

The spirituality of the holy card is the Eucharistic piety of the “Divine Prisoner.” This is the idea that Jesus in the Blessed Sacrament is confined as a “prisoner” of the tabernacle, where he waits for souls to console His imprisoned heart through Eucharistic adoration. The image of the flower springing up before the prison window is representative of the docile soul

We know from St. Therese’s autobiography that this particular holy card was instrumental in the beginning of her conversion. Meditation on the image proved to be a most salutary incentive to virtue and enflamed her love for Jesus. In Story of a Soul, she writes:

“So far I have not said anything about my love for pictures and books, and yet I owe some of the happiest and strongest impressions which have encouraged me in the practice of virtue to the beautiful pictures Pauline used to show me. Everything was forgotten while looking at them. For instance, “The Little Flower of the Divine Prisoner” suggested so many thoughts that I would remain gazing at it in a kind of ecstasy.” (1)

But not only did the image move her to piety; it was this image that caused St. Therese to think of herself as the “Little Flower” of Christ. She goes on to say that after meditating on the image on the card—

“I offered myself to Our Lord to be His Little Flower; I longed to console Him, to draw as near as possible to the Tabernacle, to be looked on, cared for, and gathered by Him.”

It was from this image and holy card that St. Therese of Lisieux envisioned herself as the “Little Flower” of Jesus, consoling Him in his imprisonment in the tabernacle merely keeping company with His Eucharistic presence. This is admirably reflective of her “Little Way”—rather than doing extraordinary deeds, she draws closer to Jesus merely sitting in His presence and yielding herself to Him. This is the heart of the Little Way: not doing extraordinary things, but doing ordinary things with extraordinary love.