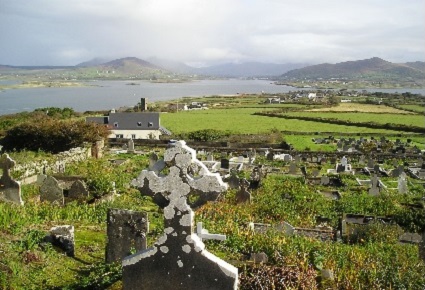 St. Darerca is about as obscure as they come. It is not known where she was born, nor when she died, nor how much of her story is myth versus history. In the annals of the Irish Church, she is remembered as the sister of St. Patrick and the mother of many saints. While much has been written about her children, and of course about her illustrious brother, details about Darerca are elusive.

Let us look first at the traditional accounts.

The Vita tripartita Sancti Patricii (“The Tripartite Life of Saint Patrick”) was the first hagiography of Patrick, composed during the late Carolingian period and meant to be read in three parts over the three days of the saint’s festival. It is in this document that we first hear mention of Patrick’s sister St. Darerca. In the Tripartite Life, we read that St. Patrick had two sisters, and that when he came to Bredach in County Derry for an ordination, he found there three deacons, who were sons of his sister Darerca. These deacons were eventually ordained bishops and became St. Reat, St. Nenn, and St. Aedh, the “sons of Conis and Darerca, Patrick’s sister.” But the Tripartite Life is vague; in another place, Patrick’s sisters are said to be named “Lupait and Tigris.” At most we can say that the Tripartite Life affirms that Patrick had two sisters, and that one of these, called Darerca but possibly identified with “Tigris”, went on to bear sons who became important Irish ecclesiastics. The Tripartite Life also states that Patrick’s sisters were kidnapped with him when he was taken into slavery, though Patrick himself does not mention this in his Confessions.

St. Darerca is said to have had two husbands, Conis being the second, who founded the church of Both-chonais, now Binnion, Parish of Clonmany, in the region of Inishowen, County Donegal. The 17th century Irish hagiographer, John Colgan, O.F.M., collecting the fragments pertaining to Darerca from Irish tradition, asserted that St. Darerca may have had as many as seventeen children between her two husbands, and that all of them became bishops. Tradition also asserts that many of these became saints.

By Darerca’s first husband, Restitutus the Lombard, she bore St. Sechnall of Dunshaughlin; St. Nectan of Killunche, and of Fennor (near Slane); of St. Auxilius of Killossey (near Naas, County Kildare); of St. Diarmaid of Druim-corcortri, in addition to five other children. By her second husband Conis the Briton, she bore St. Reat, St. Nenn, and St. Aedh; ancient Irish authors also attributed her motherhood to St. Crummin of Lecua, St. Miduu, St. Carantoc, and St. Maceaith.

To make matters more confusing, Darerca is said to be identical with a certain Liamania, another traditional name for Patrick’s sister. An inscription and cross on a pillar in the cemetery of Inchagoill, County Galway, mention a certain Lugnaedon, son of Liamania, sister of Patrick. The inscription dates from the early sixth century. If “Liamania” is identical with the “Lupait” of the Tripartite Life, then Patrick’s sister who bore such a hearty crop of bishops might be Liamania = Lupait = Darerca. Other poems of the period also refer to Patrick’s sister as Liamania, though it is uncertain how historically reliable such accounts are—they also state that Patrick’s mother was the sister of St. Martin of Tours, not impossible, but improbable.

And, to make the problem even more cloudy, there is another saint called St. Monnenia, who also goes by the name Darerca. It is uncertain if perhaps some traditions about Darerca sister of Patrick have been mixed up with the other Darerca.

In our humble opinion, the name Darerca itself is unlikely for Patrick’s sister. We know from Patrick’s autobiography that his family was of Roman-British extraction; the two members of the family that are mentioned have Latin names: Patrick (Patricius) and his father, Calpurnius. While it is not impossible that the men may have had Latin names and the women Gaelic names, it seems unlikely in a Romano-British family of the late empire. Although, in those confused times, it certainly would not have been impossible.

Regardless of the precise identity of St. Darerca, it seems certain that Patrick did have at least one sister, and that this sister must have been an extraordinary woman to bear so many sons who went on to become bishops and saints. Even allowing that the number of sons she bore might be exaggerated, even allowing that some of these saints may have been sons of the other St. Darerca, this woman still must have been an exemplar of holiness to have entered the Irish collective memory at so many different points.

St. Darerca is patroness of Valentia Island (pictured above), the westernmost point of County Kerry. Her Feast Day is celebrated on March 22nd.