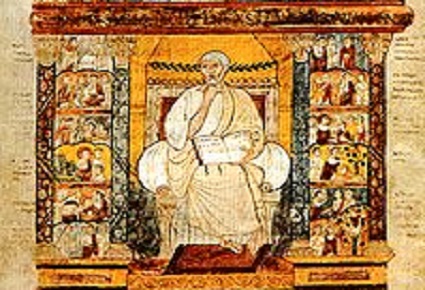 Of the early life of St. Frithona, almost nothing is known, other than that he was a native of Wessex born in the first generation after the conversion of Ethelbert of Kent by St. Augustine (d. 604) and apparently was raised a Catholic. In 655 he became the sixth Archbishop of Canterbury, the first Anglo-Saxon to occupy that See. He was consecrated bishop by Ithamar, the first Saxon Archbishop of Rochester. Soon after his consecration, he took the Latin name Deusdedit (“Dedicated to God”), by which he was thereafter known during his life.

Besides being the first Anglo-Saxon Archbishop of Canterbury, Deusdedit was one of the first Anglo-Saxon bishops in the entire kingdom of England, most until that time being of old Celtic-Briton or Franco-Gallic stock. The few authentic acts recorded of him seem to be of consecrating churches and setting up religious houses (an unsubstantiated tradition says he consecrated seventy nuns). The saintly Deusdedit died in 664 (some sources say of plague) on the same day as Erconbert, King of Kent, and was buried in St. Peter’s porch at Canterbury. Since the vandalism of Canterbury at the time of the Dissolution, the location of his relics is uncertain.

The important Synod of Whitby, which discussed whether to follow the Latin or the Celtic traditions in the Northumbrian Church, was held the year of his death, but Deusdedit appears to have been too weak to attend, as there is no record of his presence at the Synod and his death took place only a few months later.

The Feast Day of St. Frithona is July 14th.