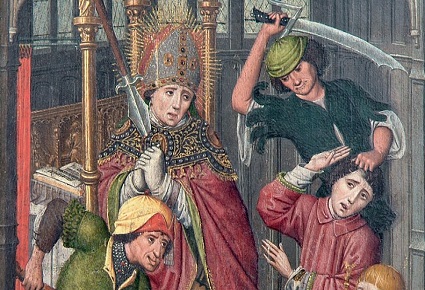 St. Lambert of Maestricht (633-700) may not be a familiar name, but the details of his life and martyrdom are extremely relevant to the current condition of the world. St. Lambert was of the local nobility and had a very pious upbringing. His devout parents entrusted his education into the care of two other saints, St. Landoaldus and St. Theodardus, Bishop of Maestricht in modern day Switzerland. In 670, Lambert became Bishop of Maestricht. During this time, the Mayors of the Palace were beginning to eclipse the power of the Merovingian kings of France and a struggle for supremacy was raging throughout the Merovingian court. St. Lambert sided with the weak King Childeric and was forced to flee Maestricht when the cause of Childeric went awry. Lambert spent the next seven years in exile (674-671), living as a simple monk in the Abbey of Stavenlot.

When Pepin of Heristal became the new Mayor of the Palace in 681, St. Lambert was invited back to his see. For the next few years he assisted in various missionary journeys of other saints, at one time working with St. Willibrord, the mentor of the famous St. Boniface. Later in life, he was also the spiritual director of St. Hubert, the worldly young nobleman who dedicated his life to God after seeing a stag in the woods with a cross between its antlers and hearing the voice of Christ warning him to repent.

According to immemorial tradition, St. Lambert died as a martyr in the defense of the sanctity of marriage, though this claim is disputed by some. Pepin of Heristal, the power behind the Merovingian throne, had lived for many years in faithful wedlock to his wife, Plectrude. Later, however, he had a very open affair with a woman named Alpais, to the scandal of the Merovingian court. When Lambert saw that no one else was willing to rebuke the Mayor for his behavior, he himself went to Pepin’s court and openly admonished the Mayor to put away his mistress. Alpais, fearing a loss of influence, convinced her brother (humorously named Dodo), to murder the saintly bishop. Shortly thereafter, while St. Lambert was praying the the chapel, assassins entered and plunged a javelin through his heart while he was kneeling. He died at the altar, a martyr to marital fidelity.

Interestingly enough, Pepin ended up having a son by Alpais his mistress who was none other than the famous Charles Martel, savior of Europe and patriarch of the Carolingians.

The Feast of St. Lambert is celebrated on September 17th. His remains, originally interred in the cemetery of St. Peter in Maestricht, were removed to the cathedral of Liege by St. Hubert in 723.