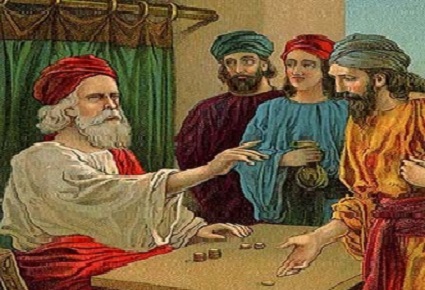 In the teachings of our Lord, Christ was fond of using monetary examples to explain truths about the kingdom. Heaven is described as a pearl, or as a coin that a woman searches for diligently. The gifts God bestows upon us are compared to talents of silver or gold that can be traded, invested, or buried. The riches of heaven are analogically compared to earthly wealth, although of the sort that moth and rust cannot corrupt. The use of monetary examples makes sense, as common people understand the intrinsic value of wealth and can draw parallels to the value of heavenly riches without much difficulty.

One of the most difficult of our Lord’s “economic parables” is the story of the unjust steward, which can be found in Luke 16. The parable is difficult because it seems like our Lord is promoting dishonesty when He commends the steward for being dishonest, and when Jesus tells us to “make friends by dishonest wealth so that when it fails you will enter the heavenly kingdom.” What is the true meaning of this parable, and does it say anything to us about our use of wealth or created goods?

The Parable of the Unjust Steward

First, let us look at the parable in its entirety, from the Douay-Rheims:

And he said also to his disciples: There was a certain rich man who had a steward: and the same was accused unto him, that he had wasted his goods. And he called him, and said to him: How is it that I hear this of thee? give an account of thy stewardship: for now thou canst be steward no longer. And the steward said within himself: What shall I do, because my lord taketh away from me the stewardship? To dig I am not able; to beg I am ashamed. I know what I will do, that when I shall be removed from the stewardship, they may receive me into their houses.

Therefore calling together every one of his lord’ s debtors, he said to the first: How much dost thou owe my lord? But he said: An hundred barrels of oil. And he said to him: Take thy bill and sit down quickly, and write fifty. Then he said to another: And how much dost thou owe? Who said: An hundred quarters of wheat. He said to him: Take thy bill, and write eighty. And the lord commended the unjust steward, forasmuch as he had done wisely: for the children of this world are wiser in their generation than the children of light. And I say to you: Make unto you friends of the mammon of iniquity; that when you shall fail, they may receive you into everlasting dwellings. (Luke 16:1-9)

Why should Christians “make friends” with the “mammon of iniquity”? Is our Lord offering the unjust steward as an exemplar for our own business dealings? Is Jesus commending dishonesty? What is going on here?

Think About the Future

Our Lord here is not commending dishonesty, but He is making a comparison similar to the one He makes when talking about the woman who pounds on the judge’s door all night long in the parable of the unjust judge (cf. Luke 18). In that parable, it is not the injustice of the judge that is commended, but the perseverance of the woman. In the story of the steward, the unjust steward knows he is about to be thrown out, so to care for his future, he remits half of the debts of all his debtors. Thus, instead of being in financial debt to his master, they will have a moral debt to him. When he gets thrown out, they will “owe” him. In other words, he is preparing for his future, and this is the point of the parable. This parable follows in a long string of parables about the perseverance and tenacity needed to take hold of eternal life.

Jesus essentially says that if even unjust people take heed about their future state, how much more should the children of the kingdom prepare for the judgment? But because the worldly people are more faithful in preparing for their temporal future than the faithful are about the eternal life, Jesus says worldly people are more prudent with dishonest wealth than we are with true wealth. This is why He goes on to exhort us to be faithful with little so that we can be entrusted with true riches in the remainder of the parable.

The term “mammon of iniquity” (μαμωνᾶ τῆς ἀδικίας “mamona tes adikias,” sometimes translated “unrighteous wealth”) does seem to strike readers the wrong way. But Jesus is certainly not saying that believers should gain wealth immorally and then be generous with it—as if He is suggesting we steal money but then be liberal in doling it out to our friends! “Unrighteous” or “iniquity” in reference to wealth can refer to:

(1) the means of acquiring wealth;
(2) the way in which one desires to use the wealth; or
(3) the corrupting influence wealth can have that often leads people to commit unrighteous acts.

Given the way Jesus employs the term, the third explanation seems the most likely. Wealth is not inherently evil, but the love of money can lead to all sorts of sin (cf. 1 Timothy 6:10). Therefore, the particular economic exhortation is that, if we must deal with money, we must be faithful with how we use it and be just. The implication is that when times of poverty come, people will respect our integrity and be willing to come to our aid. A great example of this is the film It’s a Wonderful Life. When George, who had been faithful with little, comes to ruin, because of his integrity in how he handled the mammon of the world, the neighbors all came to his aid. He made friends for himself through his prudent handling of the “mammon of iniquity.”

That would be an appropriate economic interpretation; but strictly speaking, the parable is not about our use of money, but about the necessity of preparing our souls for the judgment, just as the unjust steward took care to make preparations for his future. I think Pius Parsch sums it up well in his commentary on this parable from his classic work, The Church’s Year of Grace. Parsch says:

Let us look at the wisdom of the children of God. We know that the value of holy Mass is infinite; we know that the sufferings of this world are not worthy to be compared to the joys of heaven; we know that for following our divine Savior and denying ourselves we will ‘receive a hundredfold reward and eternal life.’ All this we know, but with what zeal do we strive after these goods? Oh, how sluggish we are in regard to eternal salvation! Truly we may not fall so low as to befriend the vices of the world. Nevertheless, we would like to enjoy the goods and pleasures of earth without losing those of heaven. So we swerve from side to side, now toward the kingdom of God, now toward the kingdom of Satan. The Redeemer had a perfect right to say: ‘The children of this world are wiser in dealing with their fellowmen than the children of light.’

Imagine what would happen if the following announcement were made: ‘All who attend Mass next Thursday will receive a quarter; and if one receives holy Communion too, he will receive a half dollar.’ Why, the church would be crowded, perhaps even the aisles. And the distribution of holy Communion would take much longer than usual! But what are those few pennies in comparison to the spiritual benefits that Mass and holy Communion confer? And men bother so little about them. By the parable, therefore, Christ wished to teach us that as children of God we should pursue our eternal welfare with the same zeal and with the same shrewdness and with the same perseverance as the children of the world strive after social status and higher standards of living.

There are slumbering within us mighty forces which should be unleashed in the service of the faith. The human will can accomplish marvels if it only decides to do so. Let us place this precious gift in the service of Christ—not a fickle, vacillating will but one which, as the poet says, ‘can tear the stars from the heavens.’ Worldlings put us to shame. They have constructed architectural wonders, pyramids, skyscrapers; tremendous feats of engineering are the fruit of human determination. It is for us to accomplish far more amazing feats in the spiritual order. For this the one and only prerequisite is to place at God’s disposal a strong human will. (1)