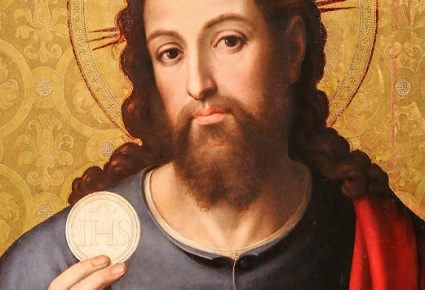 If you have ever dialogued with Protestants about the comments the Lord makes about Himself in John 6, you have probably come across the objection that when Christ says “eat My flesh” He is using figurative language, similar to when He says “I am the Door” or “I am the True Vine.” There certainly are times when our Lord speaks figuratively, but is John 6 one of those places? Much hinges on this question, since upon it depends our interpretation of the place of the Eucharist in Christian theology. Fortunately, we do not need to rely solely on our own opinions or interpretive traditions for the answer. The Greek itself gives us some very interesting insights into what our Lord meant when He said, “My flesh is true food and My blood is true drink.”

Let us begin with Christ’s words to the Jews in John 6:35-40, who had followed Him over the lake after witnessing the miracle of the multiplication of the loaves:

Jesus said to them, “I am the bread of life; whoever comes to me will never hunger, and whoever believes in me will never thirst. But I told you that although you have seen (me), you do not believe. Everything that the Father gives me will come to me, and I will not reject anyone who comes to me, because I came down from heaven not to do my own will but the will of the one who sent me. And this is the will of the one who sent me, that I should not lose anything of what he gave me, but that I should raise it (on) the last day. For this is the will of my Father, that everyone who sees the Son and believes in him may have eternal life, and I shall raise him (on) the last day.

It is this language that arouses murmuring from the Jews about its meaning, and rightfully so; at this point, our Lord is using language that is somewhat symbolic and could be interpreted any number of ways. He has yet to clarify His meaning. Our Lord will go on to clarify His statement with an even more shocking assertion:

I am the living bread that came down from heaven; whoever eats this bread will live forever; and the bread that I will give is my flesh for the life of the world. (John 6:51)

This is the first time our Lord mentions His flesh in this discourse, and the word He uses for “flesh” is sarx (σάρξ). This word sarx is typically used to denote real, physical flesh. Strong’s Concordance (a Protestant concordance), defines sarx as, “flesh (the soft substance of the living body, which covers the bones and is permeated with blood) of both man and beasts.” Sarx can occasionally mean simply body in a generic sort of way, but the Greek has another word for body: soma. The word soma is used for body in the Synoptic Gospels at the Last Supper, as well as in 1 Corinthians 10. Yet here, when the Jews are looking for our Lord to clarify His meaning on how He is the Bread of Life, He chooses the word sarx, which is a more univocal term and denotes physical flesh. Our Lord seems to be insisting on a literal interpretation.

But it gets more poignant. Seeing that the Jews still seem to be misunderstanding Him, our Lord insistently declares:

Jesus said to them, “Amen, amen, I say to you, unless you eat the flesh of the Son of Man and drink his blood, you do not have life within you. Whoever eats my flesh and drinks my blood has eternal life, and I will raise him on the last day.” (John 6:54-55)

If our Lord meant this to be symbolic, He has an odd way of showing it. If someone mistakes your words for literal when you mean them to be symbolic, what you certainly do not do is rephrase yourself in a more stringently literal fashion. Yet this is what our Lord does here. Contrast this with our Lord’s behavior in Matthew 16:11, when the disciples take His words about bread literally when He only meant it figuratively (“”How is it that you do not understand that I did not speak to you concerning bread? But beware of the leaven of the Pharisees and Sadducees”) or in John 11:13-14 (“Now Jesus had spoken of his death, but they thought that He was speaking of literal sleep. Then therefore Jesus said to them plainly: “Lazarus is dead”). In each case, the disciples think Jesus is speaking literally when He is actually speaking figuratively, and to ensure that He is not misunderstood by His followers, Christ clarifies Himself. Note how differently He behaves in John 6: The people are scandalized by what appears to be a very shocking statement of literal truth, and far from dissuade them from this opinion, our Lord goes out of His way to state the truth even more literally and bluntly!

This is demonstrated more plainly in the verb Jesus choose for the word eat. Initially, the verb is phago (φάγω); this is a form of esthio (ἐσθίω, “I eat”) and much like the English word, can have a variety of meanings. I can eat something literally. I can “eat something up” as a way of expressing delight in it. I can say “eat my dust” to express that I am faster than the person I am speaking to. “Eat your heart out” means to suffer from envy or jealousy, while to say I could “eat a horse” simply means I am really hungry. To eat one’s words means to be proven wrong about a fact previously asserted—and of course, when I was a kid, Bart Simpson popularized the phrase “eat my shorts”, meaning, “Get lost.”

Phago has all the same shades of meaning. Our Lord uses phago in John 6:48-53. But interestingly enough, in John 6:54 Jesus switches the verb He uses to represent the concept of eating. Instead of the broad, equivocal term phago, He changes to the very pointed term trogo. Trogo (τρώγω), unlike phago, has one very, specific, literal meaning: to gnaw, crunch or chew. It is a univocal term with a single meaning. When our Lord begins to use trogo for “eat” in John 6:54, He is removing the last kernel of doubt from His listeners as to the proper interpretation of His words. The proper English equivalent of trogo would be masticate, which is the scientific term for the act of chewing and is entirely unambiguous.

From John 6:54 on, Christ only uses the word trogo when referring to how believers will “eat” His flesh. A particularly interesting passage in John 6:58, where our Lord uses both phago and trogo together. The passage reads:

This is that bread which came down from heaven: not as your fathers did eat manna, and are dead: he that eats of this bread shall live for ever.

The verb “eat” is used twice here, once with reference to the Israelites eating the manna, the other to the faithful eating the Body of Christ. In this passage, Jesus uses phago when referring to the Israelites eating manna but again uses trogo when referring to Himself. The meaning is plain; Jesus wants us to understand that we will “eat” His Body in the most literal, direct sense of the word. This is why He uses sarx for flesh and trogo for eat. Had He meant this teaching to be symbolic, it is hard to understand why He would have:

(A) chosen such univocal terms when other more general terms were available that He had used on other occasions;
(B) continued to stress the apparent literal truth of His statements to His scandalized listeners;
(C) failed to offer any clarification or warning that His words were not to be taken literally, even when He had done this on other occasions;

Even when His own disciples started to desert Him, Jesus did not modify or clarify this teaching in the least. This is odd, given the other occasions when He had corrected His disciples were not nearly so serious as this. We would think that in this case especially—if Jesus did mean these words symbolically—He would have said so.

It might be objected that Jesus was always misunderstood by people. His own statements about destroying the Temple and raising it up were taken out of context by the Pharisees and used as evidence against Him at His trial, and Jesus made no attempt to clarify Himself to them. Similarly, it could be argued that the fact that Jesus didn’t clarify Himself to the unbelieving Jews in John 6 is no argument that He was not actually speaking symbolically. Unbelievers always have and always will misunderstand Jesus, and even as Christ was silent before Pilate, so was He content to let these unbelievers go away confused in John 6.

This argument is not implausible, because it cannot be denied that our Lord does remain silent at times, and that He apparently feels no obligation to clear up the muddled thoughts of unbelievers, which are usually based on willful disbelief than on sincere confusion. Yet, this does not hold up in the case of John 6, for the simple reason that it is not only to the unbelieving Jews that He makes these comments, but also to His own disciples—and that even after the Pharisees leave Him, He does not attempt to explain away the literal language in His statements even to His disciples privately.

Does Jesus have an obligation to explain Himself to disciples? While parables are symbolic language are often used by our Lord when He deals with the public or unbelieving, corrupt leadership, we see that Jesus does, in fact, explain the meaning behind His parables to His disciples privately. We see this with the Parable of the Wheat and Tares in Matthew 13 (“Then he left the crowd and went into the house. His disciples came to him and said, “Explain to us the parable of the weeds in the field”) and again in Matthew 20:17 when our Lord took the twelve apart privately and explained to them the details of what He had been prophesying about His Passion. So, while allowing unbelievers to walk away confused is plausible, our Lord never sends the disciples away confused. He always takes care that they at least understand His words in the proper sense, and in John 6 He allows them to believe His words to be literal. They may not understand the words at the time (hence Peter’s confused but faithful utterance that “You alone have the words of eternal life” in John 6:68), but they believe Him nonetheless.

The assertion that the eating of the flesh of the Son of Man in John 6 is symbolic simply doesn’t hold weight when examined linguistically and in the context of other statements made by our Lord. Taken with the fact that the Early Church understood these words to be literal as well, as we have a pretty strong case for the Catholic position on our Lord’s Real Presence in the Eucharist.

Note: As I am not a Greek scholar, I am grateful for the assistance of Jonathan Arrington, a most erudite classicist, for his assistance in fleshing out the particulars of this article. Pun intended.