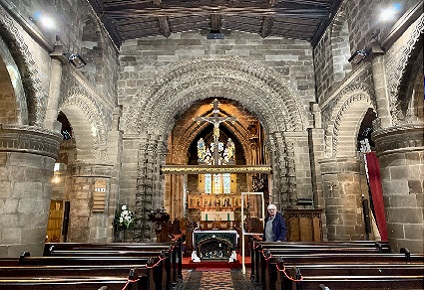 St. Chad of Mercia (not to be confused with his brother Cedd) was the first Bishop of Mercia and Lindsey and had his episcopal see at Lichfield. Like many other Anglo-Saxon bishops he was a monk, a disciple of the great St. Aidan. Though ethnically Anglo-Saxon, St. Chad was trained in the Irish disciplines at the Gaelic monastery of Lindisfarne in Northumbria. After this Chad traveled to Ireland, spending time at Rath Melsigi, the Anglo-Saxon monastery in County Carlow. When Chad returned to England, he founded his own monastery in Yorkshire under the Irish disciplines.

Shortly after the Synod of Whitby (664), St. Chad became the Abbot of Lastingham monastery. Eventually however, King Oswy of Northumbria had Chad consecrated as Bishop of Mercia during the absence of Wilfrid, the presumptive bishop-elect who was seeking consecration in Gaul. When Wilfrid returned a brief schism ensured but was solved when Chad voluntarily resigned his office at the behest of St. Theodore of Canterbury and Chad retired to the Monastery of Ripon.

The See of Mercia soon fell vacant, however, and Chad was asked to again take up the episcopacy there by virtue of his eminent holiness and excellent character. According to St. Bede, Chad’s death was heralded by the singing of angels that were heard around his monastery a few days prior to his departure. Bede described his first shrine as “a wooden coffin in the shape of a little house with an aperture in the side through which the devout can…take out some of the dust, which they put into water and give to sick cattle or men to drink, upon which they are presently eased of their infirmity and restored to health.”

Chad’s relics were translated in 1148 and moved to the Lady Chapel in 1296. An even more splendid shrine was built by Robert Stretton, bishop of Lichfield (1360-85). Rowland Lee, Bishop of Lichfield (1534-43), pleaded with Henry VIII to spare the shrine from spoilation: this was done, but only for a time. At some unknown date the head and some other bones had been separated from the main shrine. Some of these, it was claimed, were preserved by recusants, and four large bones, believed to be Chad’s are now kept in the Catholic cathedral of Birmingham. A fine Mercian illuminated Gospel Book of the 8th century called the Gospels of St Chad was probably associated with his shrine, as the Lindisfarne Gospels were associated with the shrine of St Cuthbert; it is now in Lichfield Cathedral Library. The 11th century shrine list mentions the relics of Cedd and Hedda resting at Lichfield with Chad. Thirty-three ancient churches and several wells were dedicated to St Chad, mainly in the Midlands. There are also several modern dedications.

His Feast Day is March 2nd.