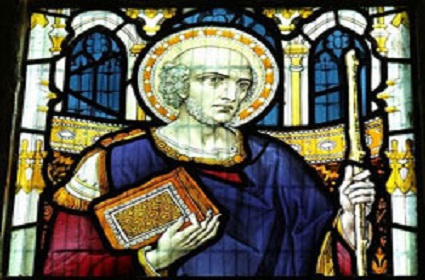 Though St, Fursey of Langy may not be too well known these days, this was certainly not the case in his own day. Born of Irish nobility, Fursey was the son and grandson of the royal family of Munster on his father’s side and of Connaught on his mother’s side; his uncle was none other than the famous St. Brendan the Voyager, who also baptized him. It was among the monks of St. Brendan that Fursey was educated and made rapid progress in sanctity; according to legend, when he was still quite young his prayers restored some twin boys to life in the court of King Brendarius.

It was not long before aspirants to the religious life sought to place themselves under Fursey’s rule and he began to found monasteries. Around this time St. Fursey also began falling into trances and experiencing ecstatic visions, the most famous of which, according to the Catholic Encyclopedia:

…revealed to him the state of man in sin, the beauty of virtue. He heard the angelic choirs singing “the saints shall go from virtue to virtue, the God of Gods will appear in Sion”. An injunction was laid on him by the two angels who restored him to the body to become a more zealous labor in the harvest of the Lord. Again on the third night following, the ecstasy was renewed. He was rapt aloft by three angels who contended six times with demons for his soul. He saw the fires of hell, the strife of demons, and then heard the angel hosts sing in four choirs “Holy, holy, holy Lord God of hosts”. Among the spirits of the just made perfect he recognized Sts. Meldan and Beoan. They entertained him with much spiritual instruction concerning the duties of ecclesiastics and monks, the dreadful effects of pride and disobedience, the heinousness of spiritual and internal sins. They also predicted famine and pestilence. As he returned through the fire the demon hurled a tortured sinner at him, burning him, and the angel of the Lord said to him: “because thou didst receive the mantle of this man when dying in his sin the fire consuming him hath scarred thy body also.” The body of Fursey bore the mark ever after.

Fursey established an important monastic community at Rathmat, where he acted as abbot for a time and where he was joined by his brothers Foillan and Ultan, who both also were later revered as saints. After establishing the community at Rathmay, Fursey resigned the abbacy and traveled throughout Ireland preaching and winning great renown as an exorcist and enemy of the demons. During this time he was granted a vision in which an angel told him that he had seventeen years of life remaining, twelve of which he was to fill with apostolic labors. After a few years of of solitude, he traveled to East Anglia in England and was granted land in Suffolk by King Sigebert in 633. He worked among the Picts and Saxons until the threat of war caused him to dissolve his monastery and move on to Gaul.

There are many tales of his miracles in France—here a boy was restored to life, there a robber converted to the religious life; another tells of a worldly woman who refused him hospitality who was also converted by him. He was eventually granted permission to set up a monastery at Lagny, six miles from Paris, which would become a center of Irish Benedictines in the region around Paris. He died of illness in January of 650 in the odor of sanctity. His burial was accompanied by many miracles and the translation of his relics in 654 was an occasion of great ceremony.

His Feast Day is January 16th.