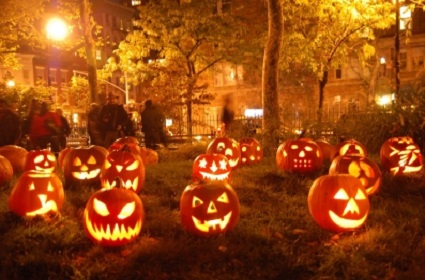 People frequently question whether the bundle of All Hallows Eve customs collectively known as Halloween are of pagan origin. Catholics know that this is a loaded question. If we mean “is the liturgical commemoration of All Saints’ Day upon which Halloween is based pagan?”, the answer is an obvious and resounding no, to which we refer the reader to our other article on this subject “The Feast of All Saints and the Roman Pantheon.” But if we mean “is the modern popular celebration of Halloween—with its twofold focus on consuming immoderate amounts of sugared sweets and glorifying everything bizarre and dark—a reflection of pagan sentiment?”, we could answer in the affirmative. Even if there is no historical connection between Halloween celebrations and pre-Christian paganism, the mass-marketed “Halloween” is certainly a manifestation of anti-Christian modernity.

However, usually when folks ask if Halloween is pagan or talk about the “pagan origin of Halloween”, they are asking whether the institution of the holiday itself derives from paganism. That is, whether Christians in late antiquity and the early Middle Ages, unable to overcome entrenched paganism among newly converted barbarian tribes, simply “baptized” a pagan ritual, slapped a Christian veneer on it, and pronounced it good. The inquiries often come from evangelical Christians who are already suspect of all things Catholic. They see in All Saints Day and its commemoration of the heroes of the faith nothing other than a residual form of pagan polytheism.

A common culprit is the pagan Irish-Celtic feast of Samhain, celebrated on the eve of October 31st-November 1st. The ancient Celts believed this was the night when the veil between the worlds of the living and dead was thinnest, and festivals and bonfires were held in honor of the departed. It thus served to counter-balance the early summer feast of Beltane, which was a celebration for the living. The lighting of bonfires is said to have evolved into the lighting of the Jack O’ Lantern, whilst the focus on the dead was easily transferred into a Christian commemoration of the dead in Christ. Retaining the traditional date of October 31st-November 1st made it that much easier to “baptize” the feast and claim the pagan celebrants for the Church. Or so the theory goes.

This argument suffers from serious historical defects. For one thing, the pumpkin lanterns associated Halloween are not attested until the Civil War period, and in the United States for that matter—hardly a time and place known for pre-Christian Celtic paganism. Like secular Christmas and Santa Claus, the things we associate with Halloween are largely commercial creations of the modern period.

More importantly, the Feast of All Saints dates to the late 4th century in the eastern Roman Empire. This presents a chronological problem for the “All Saints Day is Pagan” argument, because if the Church supposedly borrowed All Saints Day from the Celts, its origin would have to be much later, sometime after the penetration of Christianity into Celtic lands. The first real mission to the Celts was that of St. Patrick around the year 432, and the Celtic regions were not thoroughly Christianized until around 600 AD If All Saints Day were a Celtic pagan feast, we would expect to see it first attested (a) in Celtic Christian lands, and (b) not until at least 500-600 AD. In fact, we see the feast first attested in the Eastern Roman Empire and as early as the 4th century, much too soon to have been influenced by the Celtic festival of Samhain. The Chaldean Christians attest to the celebrations in Mesopotamia (modern Iraq) as early as 411. Surely no one would posit an Irish-Celtic influence in Iraq in the year 411! The chronology is just not supportive of a Celtic origin for the feast.

It is important to understand these chronological issues because the origin of All Saints Day is often placed in the year 609, or sometimes to the pontificate of Gregory III (731-741). This is incorrect; as far as we can tell, the feast was first celebrated in the mid-fourth century. As we have seen, the year 609 represents the year when Pope Boniface IV rededicated the Roman Pantheon in Rome to the Blessed Virgin and all the saints and ordered a yearly commemoration of the event be observed as the feast of dedicatio Sanctae Mariae ad Martyres, but this was not a new celebration; it was the formalization of a custom that by that time was already three centuries old. Recall also that this commemoration, taken to be the origin of All Saints, was originally on May 13th. If we are looking for a correlation between the formal establishment of the feast and the Celtic commemoration of the dead, it is not in 609.

The feast was eventually transferred to November 1st by Gregory III (731-741), who did so at the time of the dedication of a new chapel within St. Peter’s to hold the relics of several martyrs and confessors. Though by 740 there was some Irish influence at Rome, the hey-day of the Irish monks had already come and gone by then. If anything, the mid-8th century saw the dominance of Frankish and Byzantine interests at the papal court, and it would be difficult to argue that Pope Gregory III in Rome fixed the date of All Saints on November 1st for any reason to do with the Celts; as a Syrian, Pope Gregory had probably never even heard of Samhain. The likeliest explanation for the fixing of the date on November 1st probably had to do with the dedication of the new chapel; just as the date was fixed on May 13th at the dedication of the Pantheon, the dedication of the new oratory occasioned the translation of the feast to November 1st, which was most likely the day upon which the chapel was dedicated.

Even so, let us play the devil’s advocate here and allow that perhaps the interests of pagans were being considered when Gregory III moved the date from May 13th to November 1st. Let us pretend that this was done intentionally as a strategy to get pagan Celts into the Church with greater ease. Even if this were the case, we cannot presume that (a) All Saints Day evolved from Samhain or that (b) this act constituted a watering down of the faith. Let us consider each of these assumptions in turn.

To address the first, we must recognize that even if All Saints Day was instituted because of Samhain, this does not mean that it developed out of Samhain. It could have been set up as a rival holiday to Samhain. To give an example by way of analogy, if the reader will forgive me speaking of myself momentarily: When I was young, the Ku Klux Klan held a rally in my hometown. Local officials wanted to keep people away from the rally as much as possible, so many churches and other organizations staged events on the same day and time as the rally for the purpose of giving people something to do other than going to see the KKK. The events of that day were alternatives to the Klan rally, meant to rival it, not compliment it.

Similarly, we know from early Christian writings (Tertullian’s de Spectaculis, for example) that the local gladiatorial games and immoral plays (ludi) were constant temptations to Christians. This was not so much because early Christians were crypto-pagans, but rather the universality of these sorts of entertainments made them difficult to avoid. They were carried out in every major city on most days of the year; in some cases, they ran uninterrupted for weeks.  Attending the ludi was so ingrained in Roman cultural tradition that it was difficult for early Christians to break themselves of the habit of attending. Consequently, it was not uncommon for Churches to hold other celebrations or feast days simultaneously with the ludi, not for the purpose of “tricking” pagans into converting without effort, but rather to give Christians an alternative to the ludi. If Samhain celebrations were very widespread, it is not unthinkable that the Church may have chosen November 1st as the date for All Saints and made it obligatory for the purpose of preventing Christians from attending Samhain celebrations, not promoting pagan syncretism.  There is no historical evidence this is fact happened, but even if it did, it would not mean that Halloween was rooted in Samhain, save by way of opposition.

If such a thing did occur, would it constitute a watering down of the faith? Of course not, especially if we understand it as a date chosen for the benefit of wavering Christians, not to accommodate pagans. Furthermore, as mentioned above, all the neo-pagan trappings we associate with Halloween were simply not present in the 8th century. Those are all modern accretions wrapped up with commercialism and the mass marketing of the grotesque.

But we digress. As stated previously, chronological considerations make it extremely unlikely that All Saints Day was instituted with any reference to Samhain. The feast grew out of the Church’s practice of commemorating the martyrs; by the 4th century it had expanded to all martyrs and confessors (and soon after to all saints) and was generally celebrated in the spring. This was all in Greek speaking areas of the Roman Empire that had no contact with the Irish Celts and probably had no idea what Samhain was. It was only centuries later that the date was moved to November 1st, and this by an eastern-born Syrian pope most likely in connection with the dedication of a new oratory at St. Peter’s and without any connection to Samhain.

The preceding article is taken from Chapter 10 of the book Feasts of Christendom: History, Theology, and Customs of the Principal Feasts of the Catholic Church by Phillip Campbell.