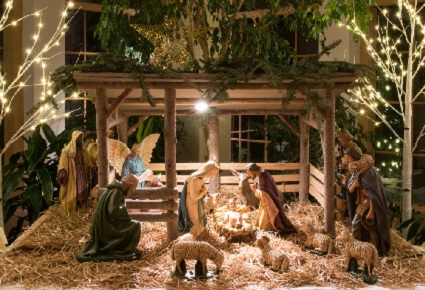 The cheer with which Catholics welcome Christmastide is regrettably marred by attacks by fundamentalist Protestants asserting that Christmas is nothing other than a pagan holiday “stolen” by the Church: a baptized Roman solar feast, or perhaps a Celtic winter solstice festival with a thin Christian veneer. What can we say to these accusations by Protestant fundamentalists and other skeptics? Is there any substance to the “pagan origin of Christmas” accusation?

In the first place, let us understand that the Church has not taught authoritatively that December 25th was Jesus Christ’s historical birthday. The earliest Christians tended to celebrate Christmas on January 6th. The earliest references to a date assigned to Christ’s birth place it around May 20th or April 20th; a pseudo-Cyprianic text from the mid-third century places it on April 28th. St. Epiphanius, around 390, argued that that Christ was born on January 6th (1). So we need not feel too invested in defending the date of December 25th; although, there is compelling evidence that December 25th is in fact a reasonable speculation, and many of the Church’s theologians and historians have in fact advocated for a December 25th birth date. Either way, we need not get too hung up on the importance of December 25th.

But we should ask, if Christmas is supposed to have pagan roots, what about it, specifically, is pagan? Is it the mere fact of its celebration of December 25th, the alleged birthdays of Zeus and Sol Invictus? Or that it commemorates the entrance of the God-Man into human history, similar to older pagan legends about demi-gods? Or the customs surrounding the celebration, such as the giving of gifts, the lighting and decorating of trees, use of certain plants like holly, ivy, and mistletoe? All these elements must be explored to satisfactorily answer this question.

December 25th, in the Roman secular calendar, is listed as Natalis Invicti, “Birthday of the Unconquerable”, referring to Sol Invictus, the Unconquerable Sun. This calendar dates from around 354, when the cult of Sol Invictus was in its death throes. The same calendar also lists the 25th as Natus Christus in Betleem Iudeæ, “Birth of Christ in Bethlehem of Judea.” So at least by 354, these days were celebrated together in Rome.

However, correlation does not equal causation. That the two were celebrated on the same day is not an argument that the former gave rise to the latter. Christianity predates the cult of Sol Invictus, meaning it is possible that the pagan feast day copied the Christian, and not vice versa. There is also the possibility of cultic rivalry: the feast may have been intentionally fixed on that day to prevent weak Christians from attending the solar festival and thus relapsing into paganism.

Much depends on what light we interpret this in. For example, rather than suggesting it suspicious that the two days lined up in Rome, some Church Fathers thought it was eminently appropriate. Pseudo-Cyprian, writing around 243, says, “O, how wonderfully acted Providence that on that day on which that Sun was born…Christ should be born.”[1] St. John Chrysostom, also, sees a profound fittingness that Sol and Christ are celebrated on the same day, and he draws a connection between this and the title “Sun of Justice”, a messianic name for Christ found in the Book of Malachi (4:2). Chrysostom says:

But Our Lord, too, is born in the month of December…the eight before the calends of January [25 December]…But they call it the ‘Birthday of the Unconquered’. Who indeed is so unconquered as Our Lord? Or, if they say that it is the birthday of the Sun, He is the Sun of Justice.(2)

A “baptism” of the pagan feast is very unlikely. For one thing, the cult of Sol Invictus was at its height around 270; by 354 it was a relic of a bygone age, and its presence on the Roman calendar a mere formality. Furthermore, as the case with the cult of Mithras, it is highly possible that the feast of Sol Invictus was borrowed from Christianity, not vice versa. (3)

Third, we know that the Church at the time was not encouraging the syncretist blending of solar worship and Christianity, as modern critics assert. If anything, the opposite was true. Tertullian vehemently denies that Christ and Sol have anything to do with one another in many passages. St. Augustine chastises those who would suggest a similarity and says it is heretical to identify Sol with Christ. Pope Leo I bitterly reproached the survivals of solar worship in his day. (4) It is highly unlikely that the Church could have simultaneously encouraged the very syncretism it was combating.

Fourth, the correlation of the births of Sol and Christ was only found in Rome and Italy; remember, throughout the rest of the Empire, the birthday of Christ was celebrated on many different days. There was not a universal celebration on December 25th until after 433, by which time Sol worship was long dead.

We should also remember that the Feast of the Nativity is not celebrated in isolation, but in the context of a period of preparation (Advent), which immediately precedes Christmas. Advent developed after Christmas, as the Feast of the Nativity was needed before a period of preparation for that Feast would make sense. Nevertheless, Advent is attested from the mid-5th century and seems firmly established by the 7th. Originally, Advent seems to have been viewed as a mini-Lent, and there is direct evidence for this: a synod held in 581 at Mâcon, in Gaul, decreed that from the eleventh of November until the Feast of the Nativity the Holy Sacrifice of the Mass be offered according to the Lenten rite on Monday, Wednesday, and Friday of the week. In many places (Spain, for example) Advent originally had five Sundays, like Lent; some regional synods forbid marriages during Advent, just like Lent. There is thus clear historical evidence that the Church viewed Advent as a type of Lent.

This being the case, one would inevitably run into a problem in those Churches where Christmas was celebrated later than January 1st: the possibility of an overlap between the fasts of Advent and those of Lent. Thus, the anchoring of the date of Christmas on the 25th of December could have been for calculating backwards to the beginning of Advent. The purpose of this was to ensure that Advent and Christmastide preceded but never overlapped with Lent. The dating of Christmas could have more to do with Advent and its relation to Lent than anything else. It would also explain the sudden popularity of the Roman practice after 380. This is but a theory, however.

Arguments are sometimes made in favor of a pagan origin of this holiday based on the customs surrounding it. For example, the custom of setting up the Christmas tree. Protestant fundamentalists will cite the Prophet Jeremiah against this practice, suggesting the custom is a survival from ancient paganism. Jeremiah 10:24 says:

Thus saith the Lord, Learn not the way of the heathen…For the customs of the people are vain: for one cutteth a tree out of the forest, the work of the hands of the workman, with the axe. They deck it with silver and with gold; they fasten it with nails and with hammers, that it might not move.

The objection would be laughable if fundamentalists did not take it so seriously. Jeremiah here condemns the Canaanite custom of setting up and worshiping an Asherah pole, not a Christmas tree.

Furthermore, to suggest that this Canaanite custom from the 1st millennium BC is the origin of our custom of decorating Christmas trees is absurd. Though there are many legends about the origin of the Christmas tree (some tracing it back to St. Boniface, others to Martin Luther), the fact is there is no real attestation of the use of Christmas trees prior to 1605. The custom originated in post-Reformation Germany, an odd place to find the survival of a pagan Canaanite religion!

To go beyond the Book of Jeremiah, certainly some customs associated with Christmas probably do have pagan origins. Habitual pagan winter customs likely gravitated towards Christmas as paganism waned and the celebration of Christmas grew in importance. The use of holly, ivy, and mistletoe (the latter a plant of the Druids) are a classic example. The Church tried to stamp out some of the more superstitious of these practices; for example, Archbishop Martin of Braga forbid the use of mistletoe as a Christmas decoration (c. 575); certain kalend fires associated with the pagan winter solstice were abolished by Pope Zachary (c. 747); Modranicht, a Celtic solstice festival celebrating the spirits of the dead, was suppressed in the 8th century; Tabulae Fortunae (food and drink offerings for increase of crops) were prohibited in 692. Yet this begs the question, if the Church tried this hard to remove the specifically pagan elements from the holiday and the season, how can we simultaneously assert that she was guilty of encouraging these customs?

A plausible theory could be that after the Christianization of Europe, the Church made every effort to do away with the most superstitious or overtly pagan customs associated with the winter solstice: offerings to spirits, celebrating the dead, etc. These customs were gradually eradicated over time. But other more innocuous customs lived on, however, and as time went by, gradually came to take on Christian symbolism and become integrated into the new Christian culture. Thus, holly berry no longer symbolized protective power from elves and faeries, but the blood of Christ. The pagan pedigree remained, but their pagan origins were so remote that their existence no longer presented a danger to the Christian people.

To draw a more modern parallel: the days of the week are all named after pagan gods; Thursday is “Thor’s Day”. Wednesday is “Wotan’s Day”, etc.; however, Norse paganism is so historically remote from us that these pagan accretions no longer present any real danger to the Christian faith. Nobody ends up worshiping Odin by calling the fourth day of the week Wednesday. These practices survive as merely cultural relics, devoid of any real spiritual significance—or, in some cases, with a Christian spiritual significance grafted on to them, which is perfectly acceptable and an example of healthy Christianization.

There is a big difference between simply allowing the adaptation of old customs to new use if appropriate for Christian use, and just “stealing” or appropriating pagan customs en masse. But most of these considerations are moot, as the majority of the customs we identify with Christmas have modern, commercial origins, not ancient pagan roots.

Was Christmas originally pagan? If we return to the Church Fathers, we see that Christmas was meant to commemorate the most important event in world history: the entry of God into His creation. Their vehement efforts to set the celebration of day apart from any sort of pagan parallel demonstrates beyond doubt that there was no attempt by the Christian Church to “baptize” any pagan holiday for the purpose of coaxing ignorant pagans into the Church. Do we occasionally see customs associated with Christmas that might have a historical pedigree linking them to paganism? Sure. But so what? Even if holly had a pagan origin, does it currently have any pagan connotation? And to whom does holly ultimately belong? “The earth is the Lord’s, and the fullness thereof” (Ps. 24:1); neither holly, nor mistletoe, nor evergreens by their nature “belong” to paganism. Any created thing can be turned to the worship of God—and why not holiday greenery? As Christ’s Incarnation and death won back humanity from Satan to God, why is it not fitting that the feast celebrating that Incarnation should be an occasion of winning back creation from the worship of demons to that of the true God?

This article is taken from Chapter 11 of the book The Feasts of Christendom: History, Theology, and Customs of the Principal Feasts of the Catholic Church by Phillip Campbell (Cruachan Hill Press, 2021).