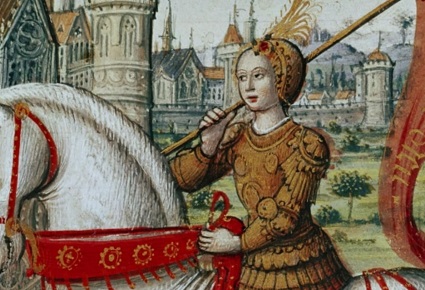 The story of St. Joan of Arc is unparalleled in the annals of western civilization. A peasant girl who had scarcely reached adulthood rallied the people of a downtrodden kingdom to unite to throw off the yoke of detested foreign invaders. St. Joan, acting at the behest of her heavenly voices, led the French troops that drove the English out of the Loire, saw the crowning of Charles VII, and the beginnings of the end of the long English presence in France. St. Joan was eventually captured by her enemies and put to death after a trial convened specifically for the purpose of ensuring her condemnation. In 1920 she was canonized by Pope Benedict XV and is now one of the patrons saints of France.

Retellings of Joan’s life typically focus on the injustice of her trial; less attention is paid to the details of her condemnation. To secure her death at the stake, it was necessary to condemn Joan for heresy and witchcraft. But what specifically brought about this condemnation?

Most readers are probably aware of the questions concerning Joan’s voices—when she first heard them, where, and to whom she attributed them. There were also inquiries about her dress and hairstyle, which made her appear masculine. Twisted out of context, these facts alone would have likely been enough to secure Joan’s condemnation. But the inquisitors also asked questions about Joan’s native town of Domrémy, and in the course of this inquiry became aware of a famous beech tree near her village at which the locals used to sing and dance at certain times of year (especially children). On February 24, 1431, Joan told the inquisitors the following about the tree:

Then she was questioned about a certain tree growing near her village. To which she answered that, fairly near Domrémy, there was a certain tree called the Ladies’ Tree, and others called it the Fairies’ Tree; and near by is a fountain. And she has heard that people sick of the fever drink of this fountain and seek its water to restore their health; that, she has seen herself; but she does not know whether they are cured or not. She said she has heard that the sick, when they can rise, go to the tree and walk about it. It is a big tree, a beech, from which they get the fair May, in French le beau may; and it belongs, it is said, to Pierre de Bourlemont, knight. She said sometimes she would go playing with the other young girls, making garlands for Our Lady of Domrémy there; and often she had heard the old folk say (not those of her family) that the fairies frequented it. And she heard a certain Jeanne, the wife of mayor Aubery of Domrémy, her godmother, say that she had seen the fairies; but she herself doesn’t know whether it is true or not. As far as she knew, she said, she never saw the fairies at the tree. Asked if she saw them elsewhere, she does not know at all. She had seen the young girls putting garlands on the branches of the tree, and she herself sometimes hung them there with the other girls; sometimes they took them away, and sometimes they left them there. (1)

You can imagine how this must have raised the inquisitors’ eyebrows. This information was not incidental, as the tree was mentioned in Joan’s articles of indictment drawn up by the prosecutor, Jean d’Estivet. The following comments were recorded about the tree in the official indictment:

‣ It was described as magna, grossa, and antiqua (“large,” “thick,” and “ancient”)
‣ The locals referred to it as l’arbre charmine faee de Bourlemont, that is, “the enchanting fairy-tree of the Bourlémont” (because the tree was on the property of the wealthy house of Bourlémont).
‣ There was a healing spring in the vicinity of the tree
‣ Sorcerers were said to commune with evil spirits (maligni spiritus) near the tree and spring; the evil spirits were said to be called Fata, whom the locals called faees (i.e., faeries). The sorcerers and Fata would dance and perform wicked deeds by the tree.

How was this relevant to Joan and her case? This information was problematic for Joan because she had been seen visiting this tree on several occasions with girls from her village. Joan admitted going there with her friends to make garlands of flowers for the image of Our Lady of Domrémy. She also admitted to occasionally singing and dancing around the tree.

Though clearly innocent, this had dangerous implications for Joan, because she had also admitted under oath that she knew the legends about the Fata and the gatherings of sorcerers. The children of Domrémy were all aware of the connection between the tree and the fairies. This led the Pierre Cauchon, the Bishop of Beauvais who presided over the trial, to suspect that Joan and her friend went to the tree specifically in hopes of encountering the evil faeries. Joan further revealed that her godmother (also called Joan, wife of the Mayor of Aubery), had actually claimed to have seen the faeries.

Joan was asked what she made of these stories. She replied that she was not aware of whether her godmother’s story was true, and that she had never encountered the faeries at the tree “as far as she knew” (quod ispa sciat). This was a very damning response. Joan made no effort to distance herself from the hearsay about the faeries. She did not deny that they existed, nor even that she had encountered them—only that she was not sure they congregated at that specific tree, and that “as far as she knew” she had never seen them—which implies it is possible she could have seen them, but unaware of their true nature. This was highly relevant because others had testified that Joan heard her voices right at this very tree.

What were the Faeries of Domrémy?

There thus arose what medievalist Andrea Maraschi called “a potential coincidence between the faeries and Joan’s voices” which posed a grave threat to her life. (2) The villagers and the inquisitors had two radically different views of the Fata. For the inquisitors, working within the traditional Christian binary conception of the spiritual world, the Fata had to be either angels or demons. Since the locals associated them with sorcerers and superstition, they were considered maligni spiritus, evil spirits. The villagers, on the other hand, possessed what we might call a more “folkish” conception of such things, affirming the existence of a third class of beings, neither angelic nor diabolic, “spirits who had been thought to live near certain trees, springs, rocks, and hills since pre-Christian times, benevolent (but dangerous) liminal figures.” (3) The inquisitors necessarily ruled out the existence of any such third class of beings; from their point of view, all that need be established was whether Joan’s voices could be attributed to the maligni spiritus of the tree.

Joan may have been aware of the judges’ attempts to connect her voices with the tree. While Joan admitted she had heard the voices under the tree, she stressed that she also heard them elsewhere: in the fields, in battle, in her father’s garden, in churches, in her prison cell, and anytime church bells rang. She attempted to establish that her voices were not localized to the tree. Her judges, nevertheless, believed the nature of her encounters were consistent with an encounter with evil spirits. Maraschi says:

The question remained whether she would have been able to distinguish between a saint and a fairy when she saw one. Needless to say, the judges were convinced that her cultural background misled her into thinking that her visitations were godly, while they were actually evil. Joan’s saints were three, just like the Latin Fatae (or Parcae), and they gave Joan foreknowledge of future events (just like the Fatae were known to do). (4)

Of course, Joan was condemned for heresy and witchcraft and burned at the stake in 1431. Her condemnation for witchcraft was related to her communing with the Fatae at the tree.

A generation after Joan’s execution, there was a rehabilitation trial held in 1456. This was meant to give Joan an honest trial posthumously to remedy the injustice of the 1431 trial. Even at this trial, when all threat had passed, the villagers were hesitant to say too much about the tree. It was object of folkloric interest, but also fear. In hindsight, Joan should have denied the very existence of the faeries, as many other villagers did who were called to testify. Joan attempted to plead ignorance, stating she did not know whether the faeries were real or whether they were truly associated with the tree. But by pleading thus, she left open the possibility that they were real, and since she could not deny that she encountered her voices at the tree of Domrémy, left open a clear path for her prosecutors to connect her voices with the maligni spiritus of the tree and secure her death.