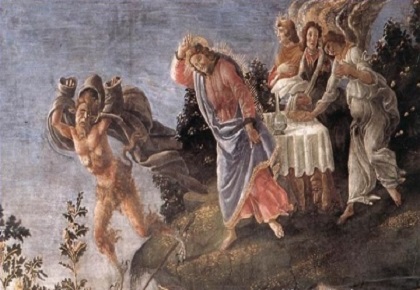 No one can deny that we are in a dark time in the history of the world, and that this stems mainly and fundamentally from the loss of faith and eclipse of the sense of God among men. Churches of all denominations are emptying, skepticism and atheism are rampant and for most God is something that has little relevance to their day to day lives. Religion, at least Christianity in the West, is experiencing a massive apostasy.

Yet, paradoxically, we are living in an age that is also hyper-spiritual. New Age philosophies are more popular than ever, and Wicca is one of America’s fastest growing “religions.” Spiritual books frequent the New York Times best-seller list and everywhere you go Eastern religious traditons are becoming more prevalent. So, while we are losing faith daily, we are as a culture adopting a more “spiritual” outlook. How do we understand this paradox?

More and more I hear people explaining it this way: “You can be spiritual without being religious.” It sounds very pleasing to the ears, but like many pseudo-intellectual maxims, a closer examination reveals that it is meaningless and contradictory. Usually, I think this position is an excuse people make up to justify their belief in the existence of God without actually acting on their belief. Belief, isolated from any other aspect of religion, is simple. It is easy to believe in something; how much effort does it take for you to believe in the blueness of the sky, firmness of the earth or heat of fire? It is a very sanitary and painless thing to believe, and also very private. When a person talks about their “beliefs” they are referring to something very hidden away and isolated within themselves, and thus something that may have very little effect on their practical life.

It is because this “belief” is so divorced from anything public, dogmatic, moral or practical that it is therefore deemed “spiritual” to “believe.” To “believe” is spiritual while to go to Church, study the Bible, fellowship with other believers, evangelize others (and especially, to cut off sin from one’s life) would be “religious.” Religion, as contrasted to spirituality, is popularly defined as the application of ones beliefs in the practical sphere of life, and furthermore, the association with other persons of the same beliefs under some sort of credal or dogmatically defined organization. This is seen as de facto bad. The phrase “organized religion” is charged with as much negativity as the phrases “spiritual” and “self-actualization” are positive.

Implied is the understanding that organized groups of “religious people” are judgmental, which is the one thing that New Agers and “spiritual” persons recognize as being universally bad. Therefore, the spiritual person must avoid being judgmental under any conditions. Of course, they don’t mean any judgments, just moral judgments that might affect the way a person lives their life. So, believe whatever you like: believe like the Scientologists that a galactic overlord named Zenu once ruled the galaxy and that disease is an illusion. That’s fine and good, but as soon as your beliefs lead you to condemn something like homosexuality or abortion, then you have passed from spirituality to “religion,” which is consubstantial with prejudice and judgmentalism.

So what are we to make of the “I can be spiritual without being religious?”

First of all, let’s get our terms correct: “spiritual” refers to something’s nature, not to its disposition. For example, we say an angel is spiritual in nature, as opposed to a man, who is earthly or material in nature. So the spiritual is opposed to the material as the immaterial to the physical. It doesn’t make sense for a person to refer to themselves as “spiritual.” The next time somebody says they are spiritual, try saying, “Actually, you are an enfleshed spirit, a union of body and soul” and see what they say. Nevertheless, I think we know what they mean. They usually mean, “I believe in a higher power and have a passing fancy in spirituality.” Again, it is belief without commitment, and something that values the disposition to seek over the goal of arriving at the end of belief, which ought to be the Triune God.

We must ask ourselves: is it intrinsically good to be “spiritual?” People talk about being spiritual as if this is good in itself. Well, it is not, for it depends upon (a) what you mean by spiritual, and (b) what kind of spirituality you espouse. You know, the devil and the demons are all “spiritual” also, and Satan is very interested in spiritual matters, and even he believes (James 2:19). But obviously, that doesn’t make him good. So, we must get past just saying “spiritual” and leaving it there as if that settles everything. To be spiritual is not to be de facto good.

Likewise, what is “religious?” The Catechism of the Catholic Church says that religion is the disposition by which man seeks to come in contact with God through exterior manifestations:  “In many ways, throughout history down to the present day, men have given expression to their quest for God in their religious beliefs and behavior: in their prayers, sacrifices, rituals, meditations, and so forth. These forms of religious expression, despite the ambiguities they often bring with them, are so universal that one may well call man a religious being” (CCC28). In itself, religion is not bad; in fact, it is part of the virtue of justice when directed towards the true God and making means to the true manner of worship; this is called the “virtue of religion.” Like spirituality, however, religion becomes corrupted and even detrimental when it is directed towards things other than the true God, or when it is directed towards the true God in a manner not befitting the true God (like when the sons of Aaron in the Scriptures tried to offer God unholy fire in Lev. 10:1-5).

Religion is a corporate action, manifested externally. It is not just me seeking my own private salvation or equilibrium inside myself, but myself as part of the human community attempting to express in human symbols and actions my gratitude and supplication towards the Almighty. Religion is not private, nor has it ever been, even in the most primitive, totemistic cultures. As Christians, we worship together, because we understand that Christ’s death has united all men in one brotherhood (because He died for all), but more importantly, that those who follow Christ are of the “household of faith,” as Paul says in his epistle to Timothy (2 Tim. 3:16). Thus, the Church is not just an organization, but it is the very family of God.

What does this mean for those who reject organized religion and maintain just a private “spirituality?” First, it means that you are rejecting fellowship with God’s family. Just like a human family, God’s family is not perfect. But you cannot neglect to come to Thanksgiving at your mother’s house just because you don’t get along with your aunt. In the human realm, we understand that blowing off Thanksgiving or Christmas Dinner or a birthday is a big insult to the family. How much more when the family is God’s family, and when the gathering together is required by God and mandated by the virtue of religion?

Second, it means that you are a practical agnostic and probably a hypocrite. Maybe you’ll argue the point, but it is true. It means you want to say you are a believer but not commit to any of the responsibilities that a true follower of God must bear. Christ was persecuted and scorned, and anybody who follows Him will be as well, but this is not as difficult as the fight against selfishness in our own hearts. Saying you are just “spiritual” without committing to the exterior exercise of religion means that you want to proclaim faith but cling to sin. Simply “spiritual” people do not vigorously pursue God and do penance for their sins. Most people who take this position also have their own private interpretations of what exactly constitutes sin and what doesn’t. And (what a coincidence!), these positions always coincide with whatever lifestyle they are already living. So, if you are living with your boyfriend or girlfriend in a sexual pre-marital relationship, well, just say that you are not “religious” and in your “spirituality” there is nothing wrong with what you are doing. How convenient!

And if we admit there is a devil out there looking to lead us astray, then this sounds like exactly the type of “spirituality” he would come up with: one that affirms people right where they are, does not convict of sin, does not encourage believers to come together in unity of doctrine or worship, and does not encourage people to struggle and pursue God. In other words, it encourages them to do nothing. So you see, the “spiritual not religious” mantra accommodates the devil very well. But that is not surprising; the devil, after all, is a very spiritual guy.