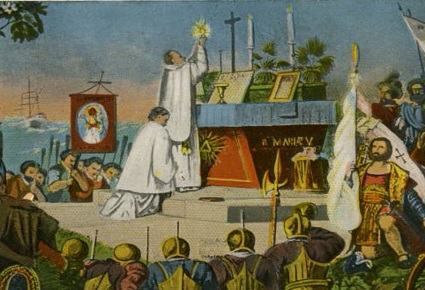 The Holy Mass is not only the dramatic representation of Christ’s sacrifice to the Father for man’s sins; in history we see that it has sometimes been the occasion of dramatic human encounters as well. Palm Sunday of 1561 was the occasion of a singular showdown between a missionary friar and the Spanish governor of Pensacola over the future of the struggling colonies of Spanish Florida.

The Expedition of Tristán de Luna

Tristán de Luna y Arellano (1510-1573) was a Spanish conquistador who, in 1559, was charged by the Viceroy of New Spain with founding a sustainable Spanish colony in “the Floridas,” which in those days comprised not only Florida but the entire Gulf region, including the modern states of Alabama, Georgia, and Mississippi. The Spaniards had already made five attempts at colonizing Florida prior to 1559. Each expedition had ended in failure, due primarily to the swampy and inhospitable nature of the terrain.

Luna decided to plant the Spanish flag much further north, at the Escambia Bay near the place the Mobile River drains into the Gulf of Mexico. This would become the future city of Pensacola, although at the time it was called Fort Santa Maria, also called Santa Maria de Ochuse. Positioned roughly half way between Cuba and Vera Cruz in Mexico, Luna thought Fort Santa Maria was strategically placed so that it could dominate the Gulf shores and be easily resupplied from either Mexico or the Indies.

Luna hastily established his settlement in September 1559 with a company of settlers—a combination of military forces and Spanish families dragged from Mexico at the prospect of cheap land. Being too late in the year for planting, Luna sent a vessel back to Vera Cruz and two to Spain for supplies. But on the night of September 20, a devastating hurricane struck the Gulf. Luna’s supply ship was destroyed, as were the entirety of the fledgling colony’s vessels at bay: five ships, a galleon, and a bark, along with all provisions aboard or ashore.

The colony suddenly found itself in desperate straits with winter coming on and no source of food. Luna had sent a scouting party into the interior to solicit aid from the natives, but the party had found only one Indian town, scarcely sufficient to supply the needs of the colonists. Governor Luna split the colony in two, sending two hundred persons under a Major Del Sauz and the Dominican Fathers Domingo de Salazar and Domingo de la Anunciación into the wilderness to seek refuge at the Indian settlement of Nanipacna on the Alabama River, which had once been visited by De Soto and was known to be capable of supporting a large population. The other bulk of the settlers, with Luna, remained at Fort Santa Maria.

The friars Salazar and Anunciación succeeded in winning the good will of the natives at Nanipacna and were permitted to settle there, calling the place Santa Cruz de Nanipacna. Word was sent to Fort Santa Maria of the good fortune of the expedition and Luna directed the remainder of the colony to abandon Pensacola and relocate to the new settlement at Nanipacna.

This, however, proved a short term solution as the influx of refugees, some fifteen hundred in all, quickly exhausted the food stores at Santa Cruz. It was decided that a small contingent of soldiers, along with the friars, would continue northeast, into the Coosa chiefdom, in present day Georgia. The little cadre under Salazar, Anunciación, and a Major Del Sauz made a grueling march up to Coosa in conditions that approached starvation. Some time was spent reconnoitering the lands around Coosa, but the friars made a negative assessment of the land, considering it not capable of supporting the fifteen hundred colonists. They sent a letter back to Governor Luna recommending the plan to remove to Coosa be abandoned.

Major Del Sauz, however, disagreed, and sent Luna a contrary letter, insisting that Coosa was habitable and castigating the friars for their poor report. Faced with these conflicting reports, Governor Luna heeded the Del Sauz over the friars and gave orders for the entire colony, starving at Nanipacna, to relocate hundreds of miles further inland to Coosa.

The provoked considerable dissention among the colonists, who at the time were reduced to eating herbs and roots and watching the young and infirm dying daily from this meager fare. The colonists drafted a petition asking Luna to rescind his order to march to Coosa, instead asking him to lead them back to the port at Escambia Bay from whence they could secure passage back home to Mexico. This petition was supported by the friars Salazar and Anunciación, as well as a considerable number of officers.

Luna, who had been urged by the Viceroy to found a settlement, was loath to abandon his plans, as it would tarnish his reputation with failure. But by and by he yielded and abandoned Nanipacna to return to the coast and the shelter of Fort Santa Maria. The winter of 1560-61 was challenging, however. Relief had still not arrived, and yet Luna was reluctant to allow the settlers to leave Santa Maria to return to Mexico. To make matters worse, a letter arrived from the Viceroy of New Spain insisting that Luna return to Coosa at once and establish a colony there. The rationale was suspected activity of the French in the area. Luna was commanded by any means necessary to secure Coosa against French instrusion, lest Spanish authority in the area be threatened.

At this point Luna’s mood shifted intractably against the settlers. He issued draconian orders for the settlers to march at once to Coosa on pain of death and confiscation of goods. One can imagine the consternation of the colonists who, recently being promised return to Mexico, were now being compelled on pain of death to a forced march at the point of starvation hundreds of miles into the interior of an unknown wilderness. The orders of Luna seemed like the ravings of a madman.

A colonial judge sent a frantic message to the friars Salazar and Anunciación, who were then in the interior doing missionary work amongst the natives. The judge begged them to return to Santa Maria at once to talk some sense into the frenzied governor. The friars, alarmed at what they read, departed at once for Fort Santa Maria. And thus the ground was laid for the showdown between the friars and the governor.

When the friars arrived, trust had broken down completely between Luna and his subordinates. The colony seemed ripe for mutiny.

It was nearing the end of Lent, 1561. Fr. Anunciación was scheduled to say the Mass for Palm Sunday. He confessed to Fr. Salazar and prayed for grace to affect some sort of reconciliation and happy resolution to the Luna affair.

On March 30, 1561, Fr. Anunciación said Palm Sunday Mass for the people of Santa Maria. Governor Luna and all the colonial officers were in attendance. After the reading of the Gospel of the Passion, he preached on the suffering of Christ for the sins of men. As the liturgy unfolded, Fr. Anunciación came to the consecration. As he consecrated the sacred host, he began to cry. After the Non sum dignus, he turned toward the people, holding the paten and host aloft and gazing at it with tear-filled eyes. He called out Tristán de Luna by name. The governor reluctantly rose, came forward, and knelt before the sacred host held aloft by Fr. Anunciación.

Fr. Anunciación said, “Do you believe that this which I hold in my unworthy hand is the Body of our Lord and Savior Jesus Christ, Son of the living God, who came down from heaven to redeem man?”

The congregation was stunned, and we may imagine the governor’s consternation at being so publicly called upon during the solemnities. Nevertheless, he responded, “I do believe.”

Fr. Anunciación continued, “Do you believe that this same redeemer will come again to judge the living and the dead; that upon the good He will bestow eternal glory and upon the evil He will consign to everlasting punishment?”

Then the priest thundered, “If, then, this you believe, as all good Christians must, how come you to be the cause of so many sins and evils which for five months we have witnessed, because you will not be reconciled with your officers, nor seek a remedy for all these people who on your account have perished and are perishing, as I often warned and implored you? If thus far you have hearkened not to men, listen to the Son of the Virgin, who speaks to you now; and fear the same Son of God who one day will be your Judge. In the name of the Lord Christ whom I hold here in my hand, I warn, I beseech, and I command you, at once to do what till now you have refused, and reconcile yourself with your people. If you do for love of our Lord and savior, I promise you, in his name, succor for all before three days have passed; and if you do it not, chastisement at his hand.”

Fr. Anunciación then finished the Mass. Immediately after the Mass had ended, Governor Luna rose from his knees and addressed the people gathered therein, saying, “Gentlemen, you have seen what Fra Domingo has done and have heard the strange words he spoke. I declare that if the fault be mine, it was never God’s will that I be the cause of so many evils. From my heart I forgive you all; and I beg you for the love of God to forgive me the injuries I have done to you and the evils you have suffered my account.” And all at once the officers and others who had been at odds with de Luna came forward and begged his forgiveness. The reconciliation was sincere and lasting.

Fr. Anunciación’s promise of relief within three days came to pass, for the promised time had not yet elapsed when a fleet entered Escambia Bay, bringing not only plentiful supplies for the colony, but a new governor to replace Tristán de Luna. The new governor sent his soldiers on to found a new settlement in the Carolinas while those who wished were transported back to Mexico.

Fr. Anunciación returned to Mexico where he would publish a renowned Spanish-Nahuatl book on Christian doctrine. Fr. Salazar would go on to have a renowned career as the first Archbishop of Manila in the Philippines and was instrumental in curbing Spanish abuses against the Filipinos.

As for Tristán de Luna, he returned to Spain in an attempt to restore his tarnished reputation. He appears to have been successful, as he married his children into the most renowned families of the Spanish nobility. His descendants played a prominent role in Spanish political life down to the 20th century.

This story and many others about Spanish America can be found in Michael Kenny’s The Romance of the Floridas (AMS Press: New York, 1934).