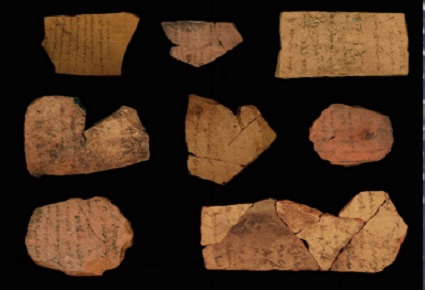 The discovery of a set of ostraca in the Negev is challenging these assumptions. Ostraca are pottery shards with inscriptions on the them. Ostraca are found throughout the world across many civilizations; they are essentially the scrap paper of antiquity. The ostraca in question were discovered at the site known as Tel Arad, a fortress city located in southern Judea on the border of the Negev Desert. Settlement at Tel Arad predates ancient Israel, but it was turned into a fortress during the time of David and Solomon. It was expanded and refortified throughout the monarchy period and eventually used as a fortress by the various rulers of Judea until the Roman period, when it was abandoned. Many artifacts have been recovered from Tel Arad, but especially ostraca.

The ostraca in question date from the middle kingdom period, 850-600 BC, roughly contemporaneous with the ministries of Elijah and Elisha, as well as Isaiah and Jeremiah. The discoveries were made when the site was first excavated in the 1960s, but many of them were unreadable due to the ravages of time, which had obscured the lettering on the ostraca. However, recent advances in sophisticated imaging tools and complex software have allowed archaeologists to reconstruct the text of the ostraca with a much higher degree of accuracy. And what they have found from the Arad ostraca undermines one of the core assumptions of the Documentary Hypothesis.

A team of archaeologists, physicists and mathematicians from the University of Tel Aviv developed specialized imaging tools and algorithms to photograph, digitize and analyze the handwriting of the missives, 16 ink inscriptions on ceramic shards. The team used multispectral imaging to reconstruct Hebrew letters that had been partially erased over time, and then used a computer algorithm to analyze the writings to detect differences in handwriting strokes.

The analysis of the shards found an astonishing degree of literacy among the Israelites of the period. Most of the ostraca detail military commands, though others are priestly in nature. Beyond proving the existence of a very highly ordered military hierarchy, the ostraca revealed that pre-Exilic Israelites were a highly literary society, not only among the elites, but the commoners as well. Literacy appears to have been common in every class of Israelite society.