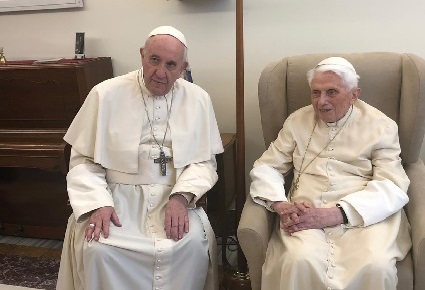 Papal resignations, though rare, are by no means unprecedented in the history of the Catholic Church. Gregory XII resigned the papacy in 1415 to end the Great Western Schism, and St. Celestine V famously resigned in 1294 after only five months on the Chair of St. Peter, choosing th e life of a hermit instead. What is absolutely novel, however, is the concept of the papal resignee somehow retaining the papal designation after his abdication, as Pope Benedict XVI did when upon his resignation chose to retain his papal name of “Benedict”, continue to be called “pope”, continue wearing the white papal cassock, and to continue residence in the Vatican.

This was a truly extraordinary step. Previous popes who had resigned also resigned any titles or trappings of the papacy as well in order to make it clear that they were not to be in any way considered pope. The confusion surrounding Pope Benedict’s actions were compounded by the insistence of Archbishop Georg Ganswein that Benedict is still pope (albeit a “contemplative” pope bereft or juridical authority) and that Benedict’s resignation has created an “open door” for an “enlarged Petrine ministry” (1) that allows for the office of pope to be exercised by multiple men at once in a variety of ways.

For Ganswein, this option seems a plausible so long as unitary exercise of the Petrine powers is preserved. In other words, he sees no difficulty with there being two, three, or even four men who are rightfully called pope so long as only one of these men is actively wielding the plenitudo potestatis at any given time. This was confirmed when journalist Paul Badde (EWTN) asked him if he could envision multiple retired popes, Ganswein said, “Indeed, because Pope Benedict has made this step, there has been now a door opened. Whether other popes will go through this open door—there, I am not a prophet. But, I personally have no difficulties to consider this to be realistic” (2).

Interestingly the history of the Church in the 4th century affords us a parallel when the people of Rome had to deal with a similar problem. To give credit where credit is due, I must say that the bulk of the following comes from the excellent historical blog Gloria Romanorum, in an article of the same name as this one. Gloria Romanorum is a wonderful blog for history nerds and we highly recommend following it.

At any rate, let us begin with a citation from the 5th century ecclesiastical historian Sozomen:

“This event [the death of (anti) Pope Felix] was, no doubt, ordained by God, that the seat of Peter might not be dishonored by the occupancy of two bishops; for such an arrangement is a sign of discord, and is foreign to ecclesiastical law.”  ~Ecclesiastical History of Sozomen, ca. AD 440

This quote is taken from the period of history when the Church was torn by the Arian heresy. After the death of Constantine the Great in AD 337, sole rule of the empire eventually devolved upon his son, Constantius II. While Constantius was just as devoted to achieving unity within the Church as was his father before him, he unfortunately lacked his father’s patience and light touch when dealing with ecclesiastical affairs. In AD 355, Constantius was so fixated on unifying the Nicean orthodox, semi-Arian and Arian parties, that he deposed and exiled Pope Liberius when the latter refused to sign a condemnation of St. Athanasius, the champion of orthodoxy who steadfastly opposed the heresy of Arius.

While Liberius was in exile, the Roman clergy elected a new pope—Felix II. Felix reigned for a little over a year, but it seems that the people of Rome never accepted him. In fact, they agitated loudly for the recall of Pope Liberius. In AD 357, Constantius gave in and ended the exile of Liberius. Why this happened is a matter of vigorous debate even to this day, and the ancient sources are contradictory. Did Liberius give in, sign documents assenting to a semi-Arian formula, and condemn St. Athanasius? Did he recant upon his return to Rome? Or did he remain steadfast until the emperor simply ended his exile to appease the Roman people?

These questions are probably not answerable, but once Constantius allowed Liberius to return to Rome, a curious thing happened. Sozomen continues:

“The bishops who were then convened at [a synod in] Sirmium wrote to Felix, who governed the Roman church, and to the other bishops, desiring them to receive Liberius. They directed that both should share the throne and discharge the priestly duties in common, with harmony of mind; and that whatever illegalities might have occurred in the ordination of Felix, or the banishment of Liberius, might be buried in oblivion.”

Having two popes at the same time was a radical, unworkable solution to the problem. For the people of 4th century Rome, the idea of two popes was a complete non-starter. They welcomed Liberius back like a conquering hero. Felix, in the meantime, was chased out of the city, but it seems he never renounced the papal office. Sozomen concludes this episode, saying:

“The people of Rome regarded Liberius as a very excellent man, and esteemed him highly on account of the courage he had evinced in opposing the emperor, so that they had even excited seditions on his account, and had gone so far as to shed blood. Felix survived but a short time; and Liberius found himself in sole possession of the church. This event was, no doubt, ordained by God, that the seat of Peter might not be dishonored by the occupancy of two bishops; for such an arrangement is a sign of discord, and is foreign to ecclesiastical law.”

To read the entire passage from Sozomen about Liberius and Felix in context, visit NewAdvent.com here. You can also read it in book form in the forthcoming new edition of The Ecclesiastical History of Sozomen from Arx Publishing.

Interestingly, Liberius is the first pope in the 350 year history of the Church to that point who was not considered a saint of the Latin Church, though he is revered as such in the East. Felix II, however, was considered a saint, at least for a time.

It is obvious that there is not a strict parallel between the cases of Liberius and Felix and those of Benedict XVI and Francis. For one thing, the suggestion of the synod of Sirmium was that both men retain the papal office, seeming to envision both men exercising the Petrine ministry simultaneously, a kind of dual plenitudo potestatis. This was the very thing repudiated by Ganswein in his statements.

However, it is interesting to note that beyond the question of the exercise of the Petrine ministry, the very idea of having two bishops or two popes was abhorrent to the Roman Church. It was seen as a sign of discord. We do not know exactly what nuances the Roman Church of the 4th century adopted when considering the problem of “two bishops”; much less can we speculate on what they would have thought of the current theory of a single Petrine ministry with active and contemplative components. It seems, however, that they envisioned the Petrine office as a unitary reality—the ministry of the successor of Peter could not be divided amongst two claimants, no matter how much “harmony of mind” they shared, because the ministry of St. Peter could only be exercised by a single individual.

We must ask ourselves, does this unity apply only to the ministerial and juridical functions of the Successors of St. Peter, or does it encompass his spiritual functions as well? Are only certain aspects of the Petrine ministry indivisible, or is the entirety of the Petrine office wholly and fully unitary such that no aspect of it can be shared among others, even if we are talking merely about prayers from a “retired” pope?

The example of Felix and Liberius is a strong argument in favor of the latter.

Special thanks to Tony from Gloria Romanorum for the meat of this essay. Please give his blog a visit.