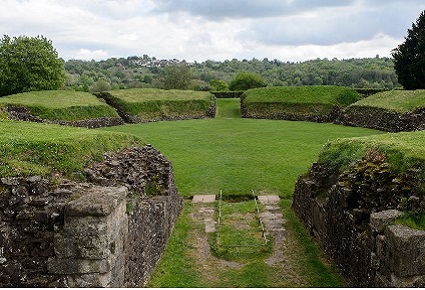 St. Aaron of Caerleon is one of only three recorded Christian martyrs from Roman Britain—the other two being St. Julius and the renowned St. Alban. His martyrdom is forever associated with the Welsh city of Caerleon, which in the 3rd century was a Roman legionary fortress called Isca Augusta surrounded by a moderately sized civilian settlement.

The story of St. Aaron comes to us from the writings of the sixth century British monk Gildas. Though Gildas wrote three centuries after the life of St. Aaron and is notably vague on details, he preserved the memory of a historical martyrdom that made a considerable impact on the lives of Romano-British Christians. St. Aaron’s tale as found in Gildas was later repeated by St. Bede in his history of the English Church.

Very little is known about the life of St. Aaron other than the fact of his martyrdom, either during the persecution of Decius (249-251) or Valerian (257). The name of Aaron is very unusual; it was not a standard Roman name nor was it common among the British. This suggests St. Aaron may have been a convert from Judaism. The Welsh fort of Isca Augusta saw considerable action during the reigns of Septimius Severus (193-211) and Caracalla (211-217), both of whom attempted to push Roman conquests in Britain further north into Scotland. Septimius Severus had prohibited new conversions to Christianity among members of the military; anti-Christian agitation occasionally broke out among the northern legions throughout the 200s, especially during the period of 249-257 while Decius and Valerian were on the throne.

According to Gildas, St. Aaron was a citizen of Caerleon (Isca Augusta). During a persecution, St. Aaron was apprehended and induced with many tortures to abandon the faith. St. Aaron was steadfast, however, and after enduring severe physical torment he was finally put to death, along with another citizen of Caeleon called St. Julius, about whom even less is known. Gildas and Bede both suggest that St. Aaron died in the same wave of persecution as St. Alban.

A ninth century land charter mentions the existence of a martyrium, a shrine, to St. Aaron at Caeleon, which is also attested in the twelfth century Llandaff registry. Though this structure had vanished by the early modern period, a cross slab was discovered in the region in the 1800s dating to the 9th century, establishing that there had been some sort of shrine or martyr’s cultus there. In 1798, the historian William Coxe visited the site and wrote that the site of the old martyrium was marked with a yew tree, and that several stone coffins had been recently discovered in the vicinity (c. 1785). Despite these discoveries, no serious archaeological excavation has been carried out at the site.

Geoffrey of Monmouth (d. 1155) wrote that Caerleon contained a house of regular canons devoted to St. Aaron as well as a university, but this seems highly unlikely.

Locally, St. Aaron’s feast was celebrated on July 1st, along with St. Julius, but the feasts were subsequently moved to June 22. However, since June 22 is also the date when the martyrdom of St. Thomas More and St. John Fisher are observed in Wales, the feast was once again moved to June 20th, where it now resides.