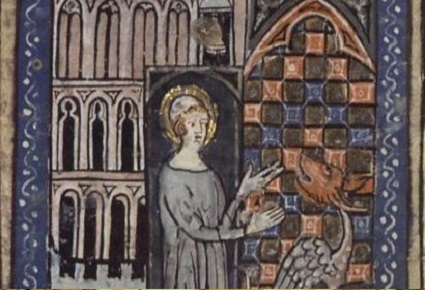 Amand, sometimes called Amandus, was born in the late 6th century and spent his early life as a monk at the monastery of Île d’Yeu, located on a small island off the coast of the Vendee, south of Brittany.

The details of his monastic years are slim. It is known that he was a pupil of the saintly Abbot Austregisilus and that he was accustomed to living on only bread and water. After fifteen years of this life of rigorous asceticism, he went on a pilgrimage to Rome and ended up consecrated as a missionary bishop to the pagan regions of the Frankish kingdom. This sudden elevation was most likely as the behest of King Clotaire II, who wished to send more bishops to the inhabitants of Ghent and Flanders. Amand’s ordination took place in 628.

It fell to St. Amand to establish the very first monasteries in what would later become Belgium; the famous monastery of Ghent was founded by Saint Bavo, a nobleman converted to the monastic life by the ardent preaching of Amand. Everywhere Amand went, good works abounded.

After the conclusion of his first missionary journey in 630, Amand angered the dissolute Merovingian King Dagobert I by rebuking the king for his sinful lifestyle. The king’s anger was aroused and he banished Amand from the kingdom, though he seems to have later repented of this and asked Amand to return to serve as a tutor to the royal household. Amand, sensing an instability in the king’s dispositions, declined and instead went on a missionary journey to the Slavs of the Danube, which proved unsuccessful. Upon returning to the Frankish dominions, he was briefly made Bishop of Maastricht, a position he held only for a few years before resigning in favor of another so he could take up his missionary labors once more. Amand spent the last two decades of his life spreading the Gospel and building monasteries among the peoples of Belgium, where he was renowned as a saint during his life.

Saint Amand died at the ripe old age of 90 in the year 675. His episcopal see would later be held by the sainted martyr, St. Lambert.

Saint Amand is the patron saint of all who produce beer: brewers, innkeepers and bartenders. His feast day is on February 6th.