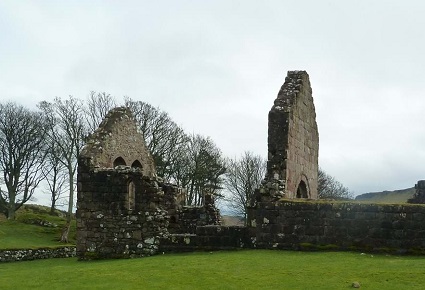 St. Blane was born on the Isle of Bute in the Firth of Clyde, a nephew of St. Cathan and pupil of the famous saints Kenneth and Comgall. He entered monastic life and labored for many years as a missionary to the Picts, He is remembered as a miracle worker and is said to have restored a dead boy to life. The date of his death is uncertain, but most authorities place it around 590.

Several places in Scotland are named after him, including Dunblane and Kilblane. He seems to have founded a church in Kingarth on the Isle of Bute, where his remains still rest. However, the center of the cult of St. Blane was not Kilngarth but Dunblane on the mainland, where the bell of St. Blane’s monastery is preserved. Why the cult shifted to the mainland is unknown, but it may have been a response to increasing Viking raids in the 9th century.

The main events of St. Blane’s life are recorded in the Aberdeen Breviary, which is our only real source of information on him. Blane’s service is unusual in that it appears in two different parts of the book. On August 10th, only a brief antiphon is recorded; to find the propers, responses, etc. one must turn to another section at the end of the book called “The Insertions.”

His Feast is celebrated on August 10th.