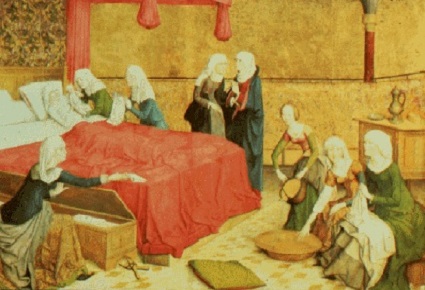 In the second chapter of St. Paul’s first epistle to Timothy, Paul is commenting on the roles of men and women in the Church. After speaking briefly on women’s decorum, he makes the following enigmatic statement:

“For Adam was formed first, then Eve; and Adam was not deceived, but the woman was deceived and became a transgressor. Yet woman will be saved through bearing children, if she continues in faith and love and holiness, with modesty” (1 Tim. 2:15).

What does St. Paul mean that “woman will be saved through bearing children”? In this essay, we will examine some historical commentary on Paul’s curious statement to hopefully shed some light on its meaning.

Let us begin by viewing the entire passage in context, as found in the Douay-Rheims with the Latin Vulgate for comparison:

With a passage such as this, it is perhaps best to begin by ruling out a certain interpretation: namely, that the physical act of bearing children guarantees a woman a place in heaven. This would be so far outside the pale of Christian orthodoxy that it does not merit a serious refutation—although, of course, one can find Protestant sects who assert this.

A more common Protestant interpretation comes from the “faith healing” school of thought, which sees this passage as a divine guarantee that faith in Christ will keep a Christian woman safe during the rigors of childbirth. These sorts of interpretations abound, all variations of the Prosperity Gospel, the idea that God wills all believers to be possess physical health and material prosperity. This, too, is untenable from a Catholic perspective.

A more mainstream Protestant interpretation of the passage is exemplified by an entry on the website The Concise Lexicon of Christianity, by Rev. Ken Collins, a minister of the Christian Church (Disciples of Christ) denomination. Rev. Collins’ commentary on the passage says:

“The primary meaning of save in Greek is to be kept safe and sound, to save someone from injury, to restore someone to health, and to keep someone from perishing. This interpretation is consistent with Paul’s theology, that if we trust the Lord, He will keep us safe when we go through calamities. Paul’s concept of salvation is much broader than ours—we tend to think of Jesus saving us from hellfire and leaving us alone to fight office politics, natural disasters, health problems, and other difficulties by ourselves. But Paul saw Jesus as saving us through all things, even if they cause our death…Paul is instructing Timothy to reassure the women in his congregation who are anxious about the prospect of giving birth. This interpretation is completely consistent with Paul’s theology and his pastoral technique of reassuring people. So I think we have to go with this one. Paul says that a woman who trusts Jesus will be kept safe through the perils of childbirth” (1)

Still other Protestant theologians argue that the “woman” St. Paul mentions is Eve, and the child the Messiah. Since St. Paul began the passage with an analogy about Adam and Eve, they argue that the syntax of the passage demands that the woman be referred to Eve. (2)

Let us turn to some Catholic commentaries. as far as I know the exact nature of this passages has never been defined and there is still disagreement on what St. Paul means. That being the case, it is also true that there has been some consensus on the matter, even among Protestants and Catholics.

We will begin with the New American Version. The NAB commentary on the verse (for what it’s worth) says, “As long as women perform their role as wives and mothers in faith and love, their salvation is assured.” This seems to be too broad a statement to be very helpful, however. Like most footnotes in the NAB, this one gives the impression of saying something but in fact gives us no help.

Let us look at something more reliable and more representative of the Catholic exegetical tradition. The 1859 Haydock Bible Commentary says:

“She shall be saved by bearing children, and performing other duties of a wife, with a due submission to her husband, taking care to serve God, and bring up her children in the faith of Christ, in piety—This would perhaps be more properly rendered, from the Greek, by the bringing up of her children in faith, charity, and holiness. This is the duty of the woman; upon the faithful discharge or neglect of which she must expect her salvation, or reprobation, to hang. Thus repairing the evil which the first of all women brought upon man, by seducing him to evil.

This is what I believe to be the most generally accepted view on the verse—among not only Catholics but Protestants as well—that a woman attains holiness by charitably and faithfully fulfilling the obligations proper to her state in life as a mother. We find this opinion in some ancient commentaries as well. For example, St. John Chrysostom:

“As all died through one, because that one sinned, so the whole female race transgressed, because the woman was in the transgression. Let her not however grieve. God has given her no small consolation, that of childbearing. And if it be said that this is of , so is that also of nature; for not only that which is of nature has been granted, but also the bringing up of children. If they continue in faith and charity and holiness with sobriety; that is, if after childbearing, they keep them in charity and purity. By these means they will have no small reward on their account, because they have trained up wrestlers for the service of Christ. By holiness he means good life, modesty, and sobriety.” (3)

Origen, too, interprets this verse to refer to the faithful Christian mother bringing up godly sons as a meritorious service to the Lord:

“Such sons, therefore, the Church produces, and such it brings forth. For “he who sows in the flesh of the flesh also shall reap corruption.” (Gal. 6:8) Now the sons of the Spirit are those about whom the apostle also says “The woman shall be saved through childbearing, if they continue in faith and purity.”(4)

The consensus of most commentators (including many Protestants) is as follows: This verse of St. Paul to Timothy has reference to the original Fall of mankind, especially since pain in childbearing was cited by God as one of curses incurred by sin, just as labor “by the sweat of the brow” was the curse for the man (Gen. 3:16,19). Shall man and woman despair of their salvation then? By no means, for just as in the case of men, manual labor is transformed in Christ from a punishment into a means by which we can attain sanctification, so too with woman. For as the rigors of childbirth was originally a punishment for sin, now in Christ those very same rigors can be an occasion of holiness – not in the physical act of bringing forth children alone, but in the raising up of those children as “trained wrestlers for the service of Christ,” which a mother does by providing an example in her perseverance in virtue and holiness.

There other other Catholic interpretations, however. Another fascinating opinion (though admittedly the minority), is put forward by the editors of the Navarre Bible, who speculate that Paul may here be giving an response to certain Gnostic heretics. Paul certainly warns against Gnostic doctrines in many other places, even within 1 Timothy, where he warns about some heretics who “Forbidding to marry, to abstain from meats, which God hath created to be received with thanksgiving by the faithful and by them that have known the truth” (1 Tim 4:3). Because of their disdain for the flesh, Gnostics treated marriage with contempt. Especially abhorred was the bringing forth of children, which was seen as simply the imprisonment of new souls within prisons of flesh.

According to Gnostic doctrine, to bring forth children would have actually been sinful, and therefore a woman who had children would be seen as “carnal” and her motherhood as evidence that she had not yet attained perfection. Perhaps St. Paul wrote to reaffirm Christian doctrine to mothers against the teaching of the Gnostics: the Gnostics say, “If you bring forth children, you are not following the discipline and will not be saved,” to which St. Paul replies in 1 Timothy, “On the contrary, you can be saved and bear children, and this salvation is rendered more secure if you continue in holiness and raise these children up in virtue.” According to this theory, 1 Timothy 2:15 should be see as an answer St. Paul gave to a challenge posed by the Gnostics.

At any rate, there is no single agreed upon interpretation as far as I can see. Most Church Fathers who commented on this verse are usually in agreement with Chrysostom and Haydock, although I think the thesis put forward by the Navarre editors has merit as well.