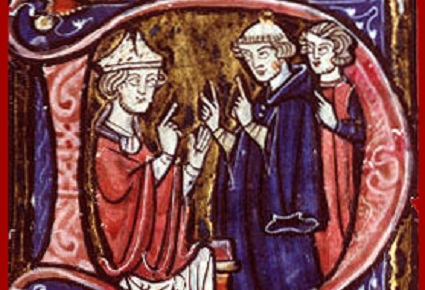 Saint Bregowine (also known as Bregwin or Bregwine) was the thirteenth Archbishop of Canterbury, holding that See from 759 until his death in 764. Little is known of the history of Bregowine prior to his consecration; some traditions hold that he was a continental Saxon lord who was converted by St. Theodore of Tarsus. Most of what we know of St. Bregowine is taken from charters and official documents of the See of Canterbury from during his reign.

The surviving documents that speak of Bregowine reveal a Church under pressure from the land-hungry petty kings surrounding Canterbury. A surviving letter of his from 760 shows him protesting the confiscating of a church and its property by King Cynewulf of Wessex; another charter reveals what appears to be a compulsory “donation” of land from the See of Canterbury to Aethelbert II of Kent. Biographies written after Bregowine’s death suggest that the saint was beholden to Aethelbert II for his position and the king demanded much of him. The year of Bregowine’s death, the lands around Kent came under the domination of the Mercians and their powerful King Offa, who would split the Diocese of Canterbury in order to weaken its power. In all this, Bregowine comes across as a saintly pastor who defended the rights of the Church.

The manner of St. Bregowine’s death is unknown, but he was venerated all over England as a saint by the mid-12th century. His Feast Day is celebrated on August 26th.