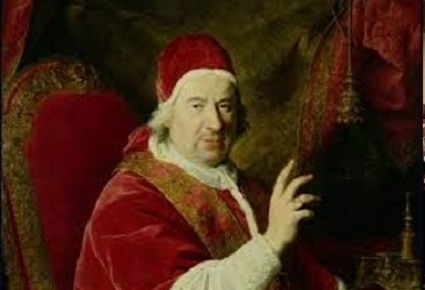 In order to strengthen our resolutions of penance, we bring you the 1741 encyclical letter Non ambigimus of the great Pope Benedict XIV (r. 1740-1758) in English. In this great encyclical, Benedict XIV elaborates on the importance of the Lenten fast, which he sees as one of the distinguishing characteristics of the true Church, at least vis-a-vis Protestantism. Another important take away relevant to our own condition is Benedict’s observation that failure to take the Lenten fast seriously or to observe it with appropriate devotion is responsible for a general decline in morals, and that the degree of this damage is not negligible. Therefore, we are happy to present an English translation of Benedict XIV’s Non ambigimus. Note: This is an original translation from the Italian and is a little rough. Anybody who has better renderings of some of these admittedly awkwardly translated phrases can check against the Italian here and message me with any proposed corrections.

We have no doubt, Venerable Brethren, that those who adhere to the Catholic Religion know how the whole Church, which has spread to the whole Christian world, considers it necessary to include the Lenten fast among the main bulwarks of true doctrine.

A period of time first sketched in the Law and in the Prophets, consecrated by the example of Our Lord Jesus Christ, handed down from the Apostles, prescribed by Sacred canons everywhere, it has been accepted and observed by the whole Church from its beginnings. Certainly, as handed down to us by the ancient Fathers, with the establishment of this common remedy for us who sin daily, we, too, joined to the Cross of Christ, are able to do something in that which He has procured for us.

At the same time, purified by fasting in the body and in the soul, we prepare to commemorate in a manner more worthy of the sacred Mysteries of our Redemption through remembrance of the Passion and the Resurrection, which are celebrated with the greatest solemnity, especially in the Lenten season.With the fast, almost a mark of our militia, we are distinguished from the enemies of the Church, we turn away the lightning of divine vengeance, and, with the help of God, we are protected in the course of the days from the Princes of darkness.

Your failure to comply results in a not insignificant offense to the glory of God, a non-negligible shame to the Catholic Religion and a sure danger to the faithful; it is certain, indeed, that the origin of the plight of the peoples, the woes of morals, public and private, is not found elsewhere. How far, how different, how contradictory is the current behaviour of the one who fasts from persuasion and respect for  most holy Lent, and for the other days dedicated to fasting, deeply rooted in the hearts of all Catholics; how this deviates from the true doctrine of fasting and from the practice observedalways, everywhere and by all.

You, Venerable Brethren, that are familiar with the uses and customs of the people entrusted to Your care, particularly by Your perceptiveness, see all of this with more evidence than anyone. Certainly, since We, who have been placed in this eminent observatory of  Apostolic Government, receive reports of the news from the people, how could we not lament that the most sacred observance of the fast of Lent has been almost completely eliminated due to the excessive ease of dispensing, everywhere, indiscriminately, for trivial and non-urgent reasons, so as to cause the just grievances of those who follow the orthodox Religion, while the followers of this heresy scoff and exult.

We are highly grieved that to this evil corruption of the multitude You add the license, which has taken hold to such a point, without taking due account of the apostolic teachings and the sacred provisions, to promote with impunity banquets in a time of fasting and in public and present prohibited feasts in a degrading manner. Driven, therefore, by a sincere and nagging concern, We turn to You, Venerable Brethren: it is not possible for Us, due to the high task of the sacred apostolate granted to Us, not to solicit Your ardent zeal to find a remedy against these evils, and to devise appropriate laws to root out these abuses.

Therefore, Venerable Brethren, Our joy and Our crown, considering that there is nothing more acceptable to God, nothing is more suitable to Our pastoral ministry, nothing is more useful for the flock entrusted to Our care, made forerunners by word and example, We do set ablaze in the heart of the faithful the desire to continue with greater conviction such a salutary exercise of penance and devotion, to remain constantly faithful and to carry it out in accordance with the provisions laid down. We try with every care, and with all the zeal for the people to remain faithful before God, for a more austere observance of fasts, such as are to be found in the same Easter Feasts.

Therefore, the service owed by Your paternal solicitude and charity requires You to inform everyone that no one is permitted to issue dispensations without good reason and the advice of two doctors. Dispensation from the Lenten fast for an entire population, for a city or for a category of persons without distinction must be requested except in the case an urgent and most grave necessity and with the due respect of this Apostolic See, wherever it may be necessary to grant this dispensation, without appropriating it in an impudent and resolute manner nor demanding it from the Church in a haughty and arrogant manner, as We know to be the case in certain places.

Even if there is no reason to explain which is the most serious need, we want You to know well that in such a situation, one should initially adhere to a single meal. Here, too, in Rome, while We are proceeding to a dispensation for the current year for urgent reasons, We have expressly declared that neither lawful nor prohibited feasts may take place without discernment. Therefore, as we are convinced that it is necessary to proceed with great caution in granting indulgences, and it could not be otherwise, because we will have to render an account to the Supreme Judge , also in this case, We think that You should take this upon Your conscience.

At the same time, we ask Your Fraternity, and we abjure You in the Lord, that You exhort those who cannot observe the penitential discipline common to all the faithful so that, as the devotion of each one may suggest, they do not neglect other works of piety, they atone for their sins and ask for God’s forgiveness.

With true fervor may they seek to discover the best way to heal the wounds that open upin fragile human nature, and if they are unable to heal them by cleansing fasts, may they redeem the faults incurred by human frailty with works of piety, the suffrage of prayers and the giving of alms. While we wait for a relief and a comfort to Our heavy affliction from Your pastoral zeal and charity, of which You will not deprive us, with all Our heart We impart to You, Venerable Brethren, the Apostolic Blessing, full of heavenly grace, to be extended to Your peoples. We also desire copies of this, also printed, signed by a notary public and bearing the seal of a personality of the church, to hold the same authority as the original and to be recognized as such wherever they are made public.

Given in Rome, at Santa Maria Maggiore, under the Fisherman’s ring, May 30, 1741, in the first year of Our Pontificate.