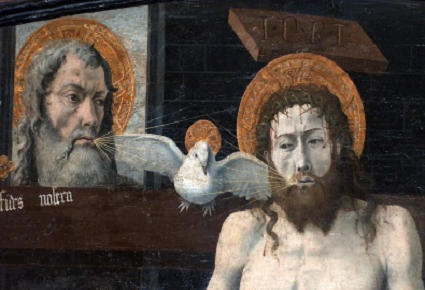 The question of the procession of the Holy Spirit remains a bone of contention between the Greek East and the Latin West. The Greeks have historically denied the doctrine known as Filioque (literally, “and from the Son”), the Latin Christian belief that the Holy Spirit proceeds from the Father and the Son, as stated in the Niceno-Constantinopolitan Creed. The Greek Orthodox have rejected and continue to reject this teaching, stating instead that the Holy Spirit proceeds from the Father alone. The Church has had no lack of talented saints and theologians arguing in favor of the Latin tradition; in this essay, we will examine the arguments of St. Anselm of Canterbury against the Greek position and in favor of the double-procession of the Spirit. St. Anselm (d. 1109) was one of the most important churchmen of his age. He was a rigorous theologian and is considered one of the fathers of the Scholastic movement.

St. Anselm’s famous work on the Holy Spirit is De processione Spiritus Sancti, which, though containing important contributions to Trinitarian theology in its own right, was written to defend the western doctrine of the Filioque against the Greeks.

In this pivotal work, Anselm refines the distinctions between indivisible unity and incompatible diversity within the Godhead in order to establish a framework from which to argue the double-procession of the Spirit. He distinguishes two basic expressions (1) “God from whom God exists” and (2) “God from God”. Now, each of the three Persons of the Godhead has a unique position or relation within this framework. The Father is unique because he is God from whom God exists, because the Son and the Spirit proceed from Him; but He is not God from God, because He Himself proceeds from none and is not begotten. The Father is the “ground” of the Trinity; in other words, He is 1 but not 2.

The purpose of these distinctions is to argue a true plurality among the Persons of the Godhead and explore their relations to one another, and in this point Anselm argues that both Latins and Greeks are in agreement. From this common ground, Anselm says, “Having advanced these premises, let us inquire how, in God, the indivisible oneness and the irreducible plurality are related to each other.” (1) This relationality will demonstrate the double-procession of the Spirit.

It is important to understand that the Greeks do not deny that the Spirit has some relation to the Son; some confess that the Spirit proceeds from the Father through the Son; others will note that since the Holy Spirit has to be the Spirit of someone, He must be the Spirit of the Son. The Scriptures say as much (cf. Rom 8:9; 1 Pet. 1:11). So the Greeks do not deny any relation with the Son and the Spirit—such would be to break the unity of the Godhead. Rather, they deny that that relation is one of procession. The Spirit does not proceed from the Son but the Father alone, though He does have some relation to the Son, at least so say the Greeks.

Anselm agrees with the Greeks that if the plurality of Persons and the unity of the Godhead is to be maintained, the Son and the Spirit must be in some sort of relation. But if the relation is not one of procession, of what sort is it? Here Anselm argues that only procession makes any sense. Divine Revelation reveals only two ways that God can be from God: being begotten or proceeding. If the Spirit does not proceed from the Son, the only other way He can be in relation to the Son is to be begotten by Him. But Anselm argues that this would be unfitting, for it would make the Spirit the Son’s Son even as the Son is the Father’s Son. In other words, it would make the Holy Spirit into a grandson, which is absurd.

Anselm also makes an interesting observation on Matthew 11:27, “No man knows the Son except the Father, nor does anyone know the Father except the Son and anyone to whom the Son chooses to reveal him.” Anselm wonders whether the Holy Spirit may be counted among those who “know” the Father and the Son? If the Holy Spirit did not have knowledge of the Son and the Father, He would be less than either and hence not God. Obviously the Spirit does have this knowledge, but how does He possess it? Anselm allows only two possibilities: that the Son had to reveal the knowledge of the Father to the Spirit just as He does to creatures, or else the Spirit knows it by virtue of sharing His essence with the Father and the Son. Anselm uses this dilemma to argue the necessity of the double-procession. Let him speak for himself:

Anselm will also make the case that the Spirit can in no way be considered the “Spirit of Christ” or the Spirit of the Son if He does not proceed from the Son:

One Greeks argument Anselm attempts to refute directly is their assertion that Romans 11:36, which says of God that “all things are from him, through him, and in him,” refers to the relations within the Godhead, where the Father is whom all things are from, the Son all things through, and the Spirit all things in. Since the Scripture says “all things”, the Holy Spirit would be included in “all things” as something that is from the Father but given through the Son. St. Anselm’s answer is simple yet compelling; if the Greeks insist that “all things” be taken as an absolute universal, then the Father and the Son must be included under “all things” as well, which would lead to an obvious absurdity. Clearly, the Greeks cannot argue from Romans 11:36 against Filioque.

Anselm offers more arguments in the rest of his work, which is 16 chapters long; if you want to read the entirety of this important treatise, you can click here to download a PDF version of St. Anselm’s De processione Spiritus Sancti. His arguments are not exhaustive and should be supplemented by other theological treatises on the subject, but they provide a very solid footing for discussions about the Filioque and form an important contribution to the corpus of western Latin theology.