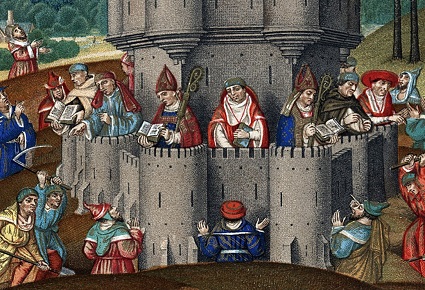 The medieval heretical sect of the Cathars are known for their dualism, rejection of ecclesiastical hierarchy, and strange ritual. One of the most interesting questions of Cathar belief is their views on apocalypticism, or rather I should say their mysterious lack of it.

The basic problem is surrounding Cathar apocalypticism is that, despite the fact that the medieval world was a world in a constant state of eschatological expectation—and despite the fact that almost all of the other notable medieval heretical movements were drenched in eschatological apocalypticism—the Cathar system was notably lacking in any sort of apocalyptic fervor that characterized so much of medieval society. Why did the largest and most organized heresy of the Middle Ages fail ultimately to produce any apocalyptic strain, something that was present in other heretical movements as well as in orthodox Catholicism? To the best of my poor ability will I endeavor to condense seventeen pages of the original article into a few paragraphs here. Those interested in medieval heresy and the Cathars in particular should definitely read the original article, which draws on some very important (but not very well known) primary sources from the Cathars themselves.

To understand what we mean by “apocalypticism,” we can use the following definition: The vivid expectation of a violent end to human history and the present world—an end preceded by conflict and the persecution of God’s faithful ones, centered on the resurrection of the dead and divine judgment, and culminating in the punishment of the wicked and the transformation of the cosmos into a glorious new home for the just (note that this definition says nothing about the issues surrounding millenarianism; it merely concerns itself with a violent end for the present world followed by its transformation). It is precisely this sort of vision that the Cathars seemed to have lacked.

The failure of the Cathars to produce any real apocalyptic expectation of this sort is especially odd given their intense persecution by Church. Historically, persecution within Christendom tended to engender apocalypticism, wherein the persecuted minority saw themselves in terms of a “faithful remnant” being persecuted by a “whore of Babylon”, which naturally suggested scenes from the Apocalypse. Why did the Cathars fail to develop this apocalypticism?

Like many other aspects of Cathar belief, the answer to this problem lies in the dualism of the Cathars. Cathars held that the world and everything in it was created by the agency of an evil principle (unmitigated dualism); this evil physical world was sometimes seen as a metaphysical parallel to the good, spiritual realm. If the good principle and the evil principle were equal, so also were their creations equal. Thus the evil, physical creation was just as eternal as the spiritual realm and could never pass away. In fact, it was something akin to hell, eternal in its duration and its misery. If the world then was eternal like the evil principle that created it, then there was no place in this scheme for any sort of final conflagration of apocalyptic consummation. It was entirely irredeemable; earth was hell. An anonymous Cathar tract entitled An Exposure put it simply: “The present world…will never pass away or be depopulated” Another Cathar text describes “this world” as “the last lake, the farthest earth, and the deepest hell,” while another asserted that “hell and eternal punishment are in this world only and nowhere else.” (1)

Some Cathars, on the other hand, did hold that this present world would perish, but this only confirmed them in the belief that it was outside the agency of the “good God,” for everything the good God created was eternal. The very fact that the world was transitory only demonstrated that it was irredeemable. Another Cathar tract stated:

“[S]ince there are many…who pay little heed to the other world and to other created things beyond those visible in this wicked world, which are vain and corruptible, which as surely as they come from nothing shall return to nothing, we say that in truth there exists another world and other, incorruptible and eternal created things…”

Another problem is the traditional implements of apocalyptic destruction were not even available to the good god of the Cathars. In the Book of Revelation, God uses earthquakes, meteors, fire and brimstone and all sorts of plagues as means of judgment on the wicked. These means are not available to the Cathar god. According to a Cathar tract, The Secret Supper, “Satan made fire…also thunder, rain, hail, and snow…” Fire was the handiwork of the evil god; it could have no purifying role in punishing evil or dissolving creation for the good god’s purposes. In fact, even the concept of God punishing or killing was attributed to the evil principle (remember, the acts of divine judgment presented in the Old Testament, such as the Flood, are also works of the evil god). Thus, the good god of the Cathars is faced with an irredeemable world and left without even the physical implements to execute judgment upon it. There can be no dies irae in Cathar theology.

The realm of the good god is a mirror reflection of the present world bearing little resemblance to the traditional idea of heaven at all. According to the Inquisition records, the heretic John of Lugio taught that “the good God has another world wherein are people and animals and everything else comparable to the visible and corruptible creatures here; marriages and fornications and adulteries take place there, from which children are born. And what is even more base there the people of the good God, against his command, have taken foreign women to wife, that is, daughters of a strange god or of evil gods, and from such shameful and forbidden intercourse have been born giants and many other beings at various times.” It was actually in this other world that Christ was born and crucified. The work of the good god takes place in this other realm.

Since there could be no eschatological climax for this present world, passages in the Bible referring to a future end of the world were interpreted to apply to the past in a kind of radical preterism. For example, the seven seals of Revelation were interpreted to have taken place in remote antiquity and correspond to the original “fall” of purely, spiritually created humans into their fleshly bodies for imprisonment in the world of the evil god. Therefore, since this world was hell, the goal was to escape the world. The righteous would be translated to the world of the good god, but the unrighteous would suffer no other damnation than to remain on earth:

“No soul will be saved other than the spirits who fell, who…will all be saved…other souls created by the devil, the evil principle, will be condemned…This condemnation…is here in the darkness of this world, that is, to sustain hunger, cold, weariness and the like…souls will not be condemned, that is, by a second condemnation, because they are already damned. Thus t[the Cathars] deny that future day when … souls will be condemned because it is already past” (Anon., ‘Brevis summula’) (2)

Naturally, if materiality were evil, then even for the just there was no anticipation of a general resurrection, a doctrine that was vehemently denied by the Cathars. There is no sense of redemption for this present world, and that longing for redemption, for a new creation and a day of justice, are what lie behind all apocalyptic ideals. Since there could be no redemption, no transformation of man qua man or of the world, then there was likewise no Cathar apocalypticism.

(1) All citations and information for this article taken from The Problem of Cathar Apocalypticism, Raymond A. Powell, Koinonia, Vol. 14 (2004)

(2) The Brevis summula contra herrores notatos hereticorum, written around 1250, was one such compilation and was meant for use by Dominicans and others whose role it was to convert heretics. The Summula proved to be a useful tool in the fight against Cathars who rejected the Church Fathers, the Old Testament, and sometimes every book of the New Testament except the Gospels.