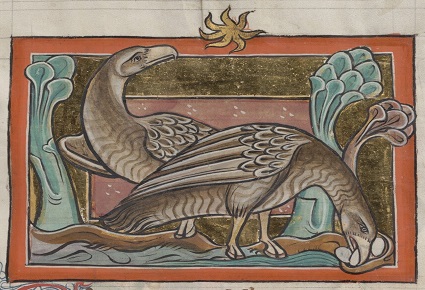 One of the most curious liturgical practices of the medieval Church comes to use in the writings of the French liturgist William Durandus (d. 1296). Durandus’ masterpiece was the Rationale Divinorum Officiorum, a encyclopedic work on the structure, ornamentation, rites, and vestments of the Church’s worship. The Rationale is broken up into multiple books focused on various themes, each offering what are largely allegorical interpretations of the meanings of the things Catholics would see and experience during divine worship. It is in the third chapter of Book I of Durandus’s Rationale, entitled On The Symbolism of Churches and Church Ornaments, that we learn about the symbolism and uses of ostrich eggs in the liturgy.

When explaining the ornamentation used in various churches, Durandus says:

“In some churches two eggs of ostriches and other things which cause admiration, and which are rarely seen, are accustomed to be suspended: that by their means the people may be drawn to the church, and have their minds more affected. Again, some say that the ostrich, as being a forgetful bird, leaves her eggs in the dust; and at length, when she beholds a certain star, returns unto them, and cheereth them by her presence. Therefore, the eggs of ostriches are hung in churches to signify that man, being left of God on account of his sins, if at length he be illuminated by the divine light, remember his faults and return to Him, who by looking at him with His mercy, cherishes him. As it is written in Luke that after Peter had denied Christ, ‘the Lord turned and looked upon Peter.’ Therefore the aforesaid eggs suspended in churches, this signifying, that man easily forgets God, unless being illuminated by a star, that is, by the influence of the Holy Spirit, he is reminded to return to Him by good works.” (1)

As a historical explanation for why the ostrich egg was suspended within the Church, Durandus’s explanation is sheer fantasy, the truth no doubt lost in the mists of remote antiquity. Instead, he draws upon the popular medieval tradition of the ostrich as a forgetful animal whose neglect of his own offspring provides an allegorical lesson for man to turn away from worldly things. One 13th century English Bestiary describes the ostrich thus:

“There is an animal called the assida, ‘stratocameleon’ in Greek, whose real name is the ostrich. It has feathers, but it does not fly; its feet are like those of the camel. When the time comes for it to lay its eggs, it lifts its eyes to heaven and looks to see if the stars called the Pleiades have appeared; it will not lay its eggs until these stars have appeared. When, in about the month of June, it sees those stars, it digs in the earth, lays its eggs and covers them in sand. When it gets up from that place, it at once forgets them and never returns to its eggs. The peaceful weather seems to ensure that the heat of the summer will warm the sand and hatch the chicks.

If the ostrich thus knows its proper time, and forgets its offspring, laying aside earthly things to follow the course of heaven, how much more, O man, should you turn to the prize of summons from on high, for which God was made man, so that He wills snatch you from the powers of darkness and set you with the princes of His people in the kingdom of His glory.” (2)

Durandus does not say where exactly the ostrich egg was suspended from, but late medieval art depicts the egg hanging from the chancel apse, presumably so it was suspended immediately over the altar. For example, consider the The Brera Madonna by Piero della Francesca (c. 1474):

The 1512 painting Apparition of the Crucified of Mount Ararat in the Church of Sant’ Antonio di Castello by Vittore Carpaccio depicts something similar. The ostrich egg is circled in red, since it can be easy to overlook. Notice its orientation immediately over the altar:

Though the eggs were hung for most of the year, there were occasions when they were removed and used for various rituals. Some ecclesiastical writers record the eggs being used in the solemnities of Easter Day. The 13th century trubadour-baron Savari de Mauléon wrote of a curious custom he observed at Matins in the abbey of St. Maurice of Angiers on Easter Day. He says:

“At the conclusion of matins, two chaplains take their place behind the altar curtains. To corbeliers (Cubiculares) is dalmatics, amices, and mitallae, with gloves on their hands, present themselves before the altar. The chaplains chant Quem quaeritis (3) The corbeliers, representing the Maries [at the tomb], reply “Jesum Nazarenum Crucifixum.” The others answer, “Resurrexit, non est hic.” The corbeliers take from the altar two ostrich eggs wrapped in silk, and go forth, chanting, “Alleluia resurrexit Dominus, resurrexit Leo Fortis, Christus, Filius Dei.” (4)

Unfortunately, de Mauléon either did not know or failed to explain the symbolism of the two eggs in this rite. Since the women came to the tomb bearing costly spices and ointments, but subsequently did not use them and went away with them, the ostrich egg—as a rare and costly item—may symbolize these spices and ointments. Or perhaps the eggs symbolize the gift of faith, which was granted upon hearing that Christ was resurrected; the movement of the eggs from the altar to the hands of the corbeliers signifying faith as a gift of God.

The use of ostrich eggs has largely vanished in the West, save for in a few cathedrals. They are still found suspended in all the eastern churches, however: Ostrich-eggs hang in Coptic , Armenian, Greek-Orthodox, and Nestorian Christians churches (for example in the Church of the Holy Sepulchre in Jerusalem). In some places where ostrich eggs are unavailable, they have been replaced by lamps fashioned to resemble and ostrich egg.

The characterization of the ostrich as found in Durandus and the Bestiary is not unique to Christians. These ideas can be found in the pagan naturalist manual the Physiologus, dating from Alexandria in the 3rd century AD. The Old Testament, too, presents the ostrich as a forgetful, even cruel parent. As a result, the hanging of ostrich eggs can occasionally be found in Jewish synagogues as well, mainly in Yemen and certain cities throughout Israel. Here, too, its significance is of a call to worship, to direct the mind to the adoration of things heavenly.

Though largely forgotten in the West, the suspension of the ostrich egg is a potent symbol of the transcendent nature of Christian worship, an ancient reminder to lift the mind to God, to leave behind earthly things, and to “look up, for your salvation draweth nigh” (Luke 21:28)

(3) Quem quaeritis? An Easter introit trope derived from the account of the visit to Christ’s tomb by the women, acted in the 10th century by ecclesiastics, and in its amplified dramatized form being the earliest known liturgical drama.