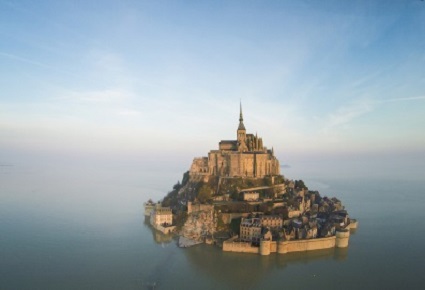 One of the most popular literary genres of the Middle Ages were compendiums of miraculous stories. These compendiums would gather together all the miracles associated with a particular saint or shrine for the edification of the lay faithful. One of the most famous compendiums of the 15th century was the Promptuaria exemplorum et de miraculis Beatae Virginis Mariae of Dominican preacher Johann Herolt. The Promptuaria exemplorum was an anthology of all of the most popular miracles attributed to the Blessed Virgin Mary throughout the Middle Ages. In the excerpt from the Promptuaria exemplorum below, Herolt relates the story of a miracle in the waters outside the famous monastery of Mont St-Michel in Normandy, France, in which the Blessed Virgin appeared to rescue a pregnant woman from drowning. The event is not dated, but the hey-day of the popular piety surrounding Mont St-Michel was in the high Norman period, during the 12th century.

“In the place called Normandy, there is a church of St. Michael, the Archangel, splendidly built; which place, being girt by the ocean, is dreaded for its tide, by reason of the ebb and flow, by all those who come there wishing to visit the house of St. Michael; since it floods the bay twice a day, not, as in other seas, gradually, but with a rushing torrent and a dreadful roar, often meeting and cutting off travelers.

Now on a certain feast day of the Archangel, when crowds were hastening to his threshold, behold, all at once they were in the midst of the sands (there being among them a certain poor women of the neighborhood already in child-labor), the dreadful roar of the sea broke out, and, when all were flying in haste like mad people, this woman alone remained, having lost the use of her feet through excessive terror and her labor. Sudden pains had seized her, and with lamentations passing shrill she called out for aid; but every man, thinking only of saving himself, pretended not to hear.

Therefore, when all human aid failed, she had recourse to heaven. With tearful voice she invoked God and His Mother and the holy Archangel St. Michael, and all the people too halted to look on the wonderful sight, and raising their hands to the stars mournfully prayed to God and His Mother for aid. Now to all who implore the help of Christ, there comes the loving Mother of God, and, as it seemed to the woman, a sleeve held above her so kept her safe and untouched by the dreadful sounding flood of the sea, that not even the least drop of all that deep touched her garments. But she, as though she lay in the safest of dwellings, brought forth her child without fear, remaining there until again the sea, withdrawing its waves into itself, gave a free passage to the woman, and she came with the child to the shore; and the sight of her who had been left alone in the sea, coming forth no longer alone, was a marvel for all the people to behold.” (Johannes Herolt, Miracles of the Blessed Virgin Mary, 15th century)