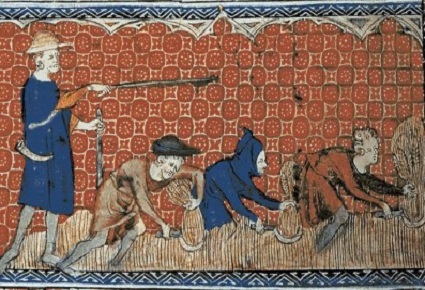 The Gesta Romanorum was written at the turn of the 14th century; this collection of anecdotes and tales was one of the most popular works of its era. It is called Deeds of the Romans because some of its material comes from Greek and Roman history and legend, but these were essentially short stories that were meant to teach moral lessons. In the following tale from the Gesta Romanorum, we see the medieval approach to the problem of unintelligible suffering and evil in the world – the branch of theology known as theodicy. Rather than condemn suffering as an unjust act of an callous God, the Gesta encourages us to try to see the disposition of all things in the plan of God’s Providence. Where one is tempted to see evil or cruelty, it may in fact be a case of justice.

Here is one tale from this collection about a severed foot:

“A certain tyrannical and cruel knight retained in his service a very faithful servant. One day, when he had been to the market, he returned with this servant through a grove; and by this way lost thirty silver marks. As soon as he discovered the loss, he questioned his servant about it. The man solemnly denied all knowledge of the matter, and he spoke the truth. But when the money was not to found, the knight cut off the servant’s foot and, leaving him in the place, rode home. A hermit, hearing the groans and cries of the man, went speedily to his help. He confessed him, and being satisfied of his innocence, conveyed him upon his shoulders to his hermitage.Then entering the oratory, he dared to reproach God with want of justice, inasmuch as he had permitted an innocent man to lose his foot.For a length of time he continued in tears, and prayers, and reproaches; until at last an angel of the Lord appeared to him and said, “Has thou not read in the Psalms ‘God is a just judge, strong and patient’?”“Often,” answered the hermit meekly, “have I read and believed it from my heart; but today I have erred. That wretched man, whose foot has been cut off, perhaps under the veil of confession deceived me.”“Tax not the Lord with injustice,” said the angel. “His way is truth, and His judgments equitable. Recollect how often thou has read, ‘The decrees of God are unfathomable.’ Know that he who lost his foot, lost it for a former crime. With the same foot he maliciously spurned his mother, and cast her from a chariot—for which eternal condemnation overtook him. The knight, his master, was desirous of purchasing a warhorse, to collect more wealth, to the destruction of his soul; and therefore, by the just sentence of God, the money which he had provided for the purchase was lost. Now hear; there is a very poor man with his wife and little ones, who daily supplicate heaven, and perform every religious exercise. He found the money, when otherwise he would have starved, and therewith procured for himself and his family the necessaries of life, entrusting a portion to his confessor to distribute to the poor. But first he diligently endeavoured to find out the right owner. Not accomplishing this, the poor man applied it to its proper use. Place then a bridle upon thy thoughts; and no more upbraid the righteous Disposer of all things, as thou had lately did. For he is just, and strong, and patient.”

The story is unsatisfactory as an ultimate answer to the problem of evil; it presumes or at least implies that all temporal adversities are a result of punishments for sin, taking almost the position of the three friends of Job. Still, it is admirable in that, even if its theodicy is incomplete, it presumes that all things are worked into God’s divine Providence. Man has no ground to accuse God of injustice, for everything that God brings about is just. It is in this fundamental assertion about the world that these sorts of medieval tales have their greatest value.

This story, and others from the Gesta Romanorum, can be found in Mediæval Tales, translated by Henry Morley (London, 1886).