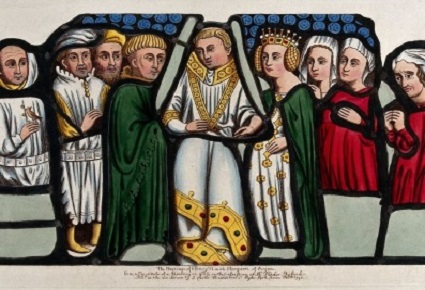 Just before he became Pope Innocent III in 1198, Cardinal Lothario of Segni wrote De miseria humanae conditionis (“On the Misery of the Human Condition”). The work is a meditation on the brevity and sorrows of human life and an exhortation to prepare oneself for the kingdom of heaven. In one chapter, entitled ‘On the Misery of the Continent and the Married’, Cardinal Lothario encouraged young men to choose celibacy. Part of his argument is a praise of the merits of virginity, as found in many classical works such as those composed by Augustine, Gregory of Nyssa, Tertullian, Ambrose and  others. But another part of this chapter seeks to convince young men against marriage by going on about the miseries of the married state. We present here, for your edification—and humor—ten reasons why a man ought not to get married, as excerpted from De miseria humanae conditionis of Cardinal Lothario de Segni, the future Pope Innocent III.

The work, though very popular in the Middle Ages, has, to our knowledge, not yet been translated into English. We present here various excerpts and nuggets culled from the work. Below are ten arguments put forward by Cardinal Lothario on why a man ought to choose the celibate life over matrimony:

1. “A wife competes to have the most expensive dresses and accoutrements, so that the upkeep of the wife always exceeds her husband’s fortune…”2. “In general, she sighs and cries, day and night, and gossips and grumbles.”3. She’ll say [of another woman], “She is better dressed and can go out in public, and is honored there by everyone; while I am the most miserable, the only one to be looked down upon in the gathering of women, and am disparaged by all.” 4. “Only she wishes to be loved, only she to be praised; praise of another is treated suspiciously as a disgrace to herself.”5. “Everything she loves is to be loved, everything she rejects is to be hated.” 6. “She wishes to win, but her victory is worthless.”7. “She cannot bear to serve, but strives to dominate.” 8. “She wants to be allowed to do anything and not be prohibited from anything.”9. “If she is beautiful, it is easy to fall in love with her, and if she is ugly she will willingly do her best; but it is difficult to keep hold of what is loved by many, and troublesome to possess what one wishes not to have.”10. “You can try it out before you buy a horse, an ass, an ox or a dog, clothes or a bed, even a cup or a jug; but a wife is only glimpsed with difficulty, so that she might displease before she is taken; whatever might come about in the end, she must be kept by necessity, even if she is fat, stinky, ill, idiotic, or even proud or irascible, or if she has any corrupted blemish.”

Words of one of the most powerful popes of all time on the condition of the married man. And here we shall leave you without further comment! Post courtesy of Medievalists.net.