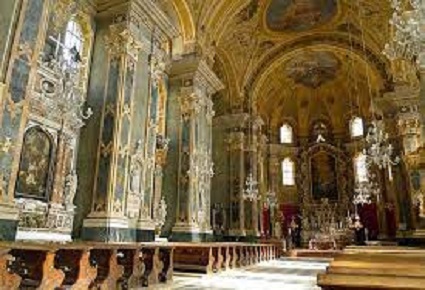 St. Ingenuinus goes by many names; he is sometimes called Ingenuin, also Jenewein. He lived in the mid to late 6th century in the region of Austrian Tyrol. Ingenuinus appears to have been the second Bishop of Säben, which is now the diocese of Brixen. He appears to have held the bishopric from 577 to his death in 605. His name is believed to mean “little kneeling one.”

The origin of Ingenuinus is unknown, but extant sources seem to suggest he was of an Italian or Roman origin. Tyrol had for centuries been part of the Roman province of Raetia. In the 6th century the Ostrogoths, Franks, and Lombards all fought for hegemony in the region. Ingenuinus appears to have originally been a subordinate of the Patriarch of Aquileia. He appears for the first time in history in 577 to take charge of the newly organized Diocese of Sabiona (Säben, now Brixen) as a suffragan of Aquileia.

Ingenuinus’ name appears as a participant in a Synod at Aquileia in 588-90. His diocese was thrown into turmoil in 590 when the Franks invaded the region, destroying several Lombard-Roman fortresses. A letter exists from the time of this invasion that our saint wrote to Bishop Agnellus of Trento.

Ingenuinus’ episcopacy was contemporary with the pontificate of St. Gregory the Great (590-604). Ingenuinus found himself opposing the pontiff in the conflict known as the Three Chapters Controversy. The controversy of the Three Chapters dated back to the previous generation in an attempt to reconcile non-Chalcedonian Christians in the east with the Church. Aquileia had gone into schism during the controversy, though by Ingenuinus’ time was reconciled with Rome. Nevertheless, Ingenuinus’ name appears on a document from 591 appealing to the Byzantine Emperor Maurice in opposition to Gregory.

There are few details on the death of Ingenuinus; his diocese was attacked by the Arian Lombards as well as the pagan Baiuvarii and Slavs. In the high middle ages there was a strong tradition that he was martyred and was venerated a such; in modern times he has been venerated as a confessor instead. At any rate, he appears to have died in Säben where he was buried until the translation of his relics to Brixen Cathedral around 990. Ingenuinus’ original tomb was discovered in Säben in 1982, which was confirmed to date form the time of his episcopate.

Ingenuinus’ feast day is February 5th. He is venerated as the patron of the Diocese of Brixen, as well as of mountain dwellers.