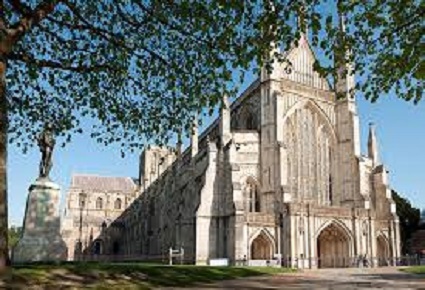 When we first hear of St. Beornstan, it is as a simple mass priest at the court of King Aethelstan in 924. As a mass priest, he was one of the minor clerics in the court of the king, most likely in charge of keeping watch over the king’s personal collection of relics and hearing confessions of the members of the court. He appears to have been held in high regard by Aethelstan, for when the bishopric of Winchester fell vacant in 931, Aethelstan recommended Beornstan to the see. Thus, with the blessing of Wulfhelm of Canterbury, Beornstan entered into possession of the See of Winchester.

He was remembered for his extreme humility and personal piety, but did no great works of note; he appears to have been a quiet, deferential man, unsuited by disposition to such a lofty office but carrying it out faithfully in obedience to his temporal and ecclesiastical superiors. When he died in 934 after only three years as bishop, there was no immediate cult. However, some years later, during the episcopacy of Aethelwold, one of Beornstan’s successors in Winchester, St. Beornstan is said to have appeared in a dream to Bishop Aethelwold. In the dream, Beornstan stated that in heaven he was accorded equal honor with the greatest founders of the English Church, but that in his own See of Winchester he was not venerated. Taking this as a sign from God, Aethelwold enthusiastically promoted the cult of Beornstan and he was subsequently revered as a saint, though his cultus was confined to the areas around Winchester and died out after the Anglo-Saxon era came to an end.

His Feast is November 4th.