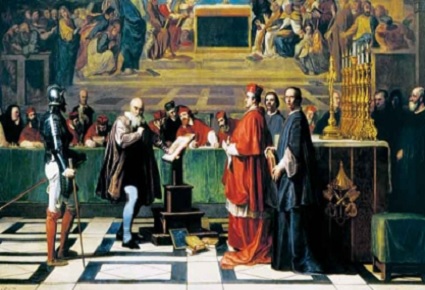 When it comes to the Catholic Church, the old maxim certainly holds, which says that it is not so much that people are in ignorance, but that they know too many things that aren’t true. Nowhere is this so sadly the case as in the popular myth of the Church’s supposed opposition to science and scientific progress. Modern scientists from every field of study decry the Church as an institution that for centuries kept true scientific knowledge hampered in a prison of Christian dogmatism. This mindset sees the Church, particularly the medieval Church, as an enemy of reason and inquiry and asserts that true scientific progress can only occur when freed from religious influence, doctrinal, moral or otherwise. These worshipers of science see adherents of Christianity as being cloaked in ignorance.

Take, for example, the common notion that medieval man believed in a flat earth. Everybody knows that the Greeks, from Plato and Ptolemy onward, knew that the earth was spherical. But supposedly with the advent of Christianity, man reverted to a belief in a flat earth because “the Bible said it was so.” It was only with the discoveries of Columbus and Magellan that Europeans came to realize that the earth was round. Thus runs the argument.

Nothing could be more patently false. Though it cannot be denied that some may have believed in the flatness of the earth throughout the Middle Ages, it is also true that among the educated the roundness of the earth was always common knowledge. Take, for example, Aquinas’ statement that the roundness of the earth is something easily known by common sense and provable both by astronomy and physics, “for the astronomer and the physicist both prove the same conclusion-that the earth, for instance, is round: the astronomer by means of mathematics (i.e., abstracting from the matter), but the physicist by matter itself.” (1) The amazing thing about the statement of Aquinas is not so much that he says that the world is round, but that he simply seems to take it for granted that everybody knew it, too! He even gives two examples of how the earth’s roundness can be known: by physics and mathematics. Anyone who has ever read the Divine Comedy knows that Dante presupposed a round earth for his geography of Hell and Purgatory to make sense.

Even during the darkest times of the medieval age, men still believed in the roundness of the earth, albeit in sometimes less than scientific terms. Witness this statement from the seventh century St. Bede, who described the earth’s roundness in terms of an egg: “The earth is an element placed in the middle of the world, as a yoke in the middle of an egg; around it is the water, like the white surrounding the yoke; outside that is the air, like the membrane of the egg; and around all is the fire, which closes it in as the shell does.” Furthermore, Columbus, the man who supposedly proved the earth was round, had absolutely no intention of setting out to challenge prevailing notions of a flat earth; he, like every other sailor and cartographer of the age, already knew that the earth was round. Columbus’ revolution was not that the east could be reached by going west, but that the east could be reached faster by going west. His risk was in going to a known place in a known direction but of unknown distance (oddly enough, part of Columbus’ motivation for believing the Indies to be closer than most thought was a verse from the apocryphal 2 Esdras 6:42 that stated that only one seventh of the earth was covered in water). The fact that the earth is round was simply never seriously contested.

The roundness of the earth is just one example of the prevailing mindset that pits the Church against knowledge. Like many other criticisms of the Church, this one depends on maintaining a false dichotomy. There is no real opposition between religion and science, because there is no opposition between faith and reason. Catholic theology from Augustine and Thomas onward has always acknowledged that true scientific knowledge can never contradict revelation because both revelation and the laws of science come from the same God, who is Truth and cannot contradict Himself. Any apparent contradictions come from either a misunderstanding of what revelation is teaches or (more often than not) a defect in the conclusions drawn by science; this is especially true in the areas where the boundaries of science must be defined by a system of rightly formed ethics. In the end, there are no true contradictions because God, the source of all knowledge, is True and no untruth can be found in Him.

Indeed, the truth of the matter is not only that the Catholic Church is not against scientific advancement, but that it has actually contributed more to the advance of science than any other organization. Though in this age of skepticism many scientists claim to be atheists or at least agnostics, many people are surprised to find that this was not always the case. Many distinguished scientists throughout the centuries have at the same time been devoted clergymen and loyal sons of the Church. The annals of Church history boast of many figures who were not only scientists of the first rank, but who were considered the fathers of their field of study. Take Nicolaus Copernicus, the great founder of modern astronomy, who was a Third Order Dominican, studied canon law for three years in Bologna, received Minor Orders, served many years as the Canon of the Cathedral of Frauenberg and in his spare time composed Latin poems in honor of the Blessed Virgin, the Nativity and the events of the life of the Child Jesus. Unlike the defiant Galileo, Copernicus submitted all of his work to the judgment of the Church and remained in good standing with Rome. He was a friend of many priests and bishops and he was even considered for the bishopric of Ermland by King Sigismund of Poland when the See fell vacant in 1537, leading some to surmise that Copernicus may have also received Major Orders at some point. Despite his fame, he remained a simple and humble man. By his own request, his grave is inscribed with this prayer: “I ask not the grace accorded to Paul, nor that given to Peter: give me only the favor Thou didst show to the thief on the cross.”

There are many other noteworthy examples: Basil Valentine, the mid 15th century Benedictine monk who through his experiments with sulfur, mercury and salt laid the foundations for the modern discipline of chemistry and first distinguished that science from alchemy. Thomas Linacre (1460-1524), the founder of the Royal College of Physicians, personal physician to Henry VIII and friend of both St. Thomas More and Pope Leo X, was an ordained Catholic priest. The Royal College he founded still exists under his original charter and to this day perhaps no distinction is more sought out by British doctors than the privilege of adding to their names the letters “F.R.C.P. (Eng.),” Fellow of the Royal College of Physicians, England. In his retirement as a prebend of the Cathedral of York he prayed often, celebrated Mass daily, heard the Divine Office three times a day and made the rounds visiting the churches of the diocese.

There was Fr. Athanasius Kircher, S.J., (1601-1680), a man with endless curiosity and a gift for experimentation, who wrote a book on the plague that hypothesized that disease was caused by tiny microbes that entered the body and produced disturbance in its vital systems, studied oriental languages, wrote two volumes on astronomy, a textbook on physics, invented a calculating machine, wrote treatises on magnetism, optics and metallurgy and once had himself lowered down by rope into the steaming cone of the volcanic Mt. Vesuvius to measure the dimensions of the crater. In his day he was known as the Doctor centum artium—that is, the teacher of a hundred arts. Far from being censured for his inquiries, Kircher was summoned to Rome under the patronage of Cardinal Barberini in 1635 and made Professor of Mathematics and Oriental Languages at the Roman College of the Jesuits.

There is Bishop Niels Stenson, the famous anatomist and father of geology; there is the Frenchman Abbé Haüy, a Premonstratensian and member of the Academy of Sciences who is considered the father of crystallography and who established the law of symmetry, which demonstrated that the forms of a crystal are perfectly definite and based on fixed laws. One of the most famous of all these clerical scientists is the Austrian Abbot Gregor Mendel (1822-1884) whose experiments with peas in his monastery gardens became the cornerstone of the discipline of genetics, which has not ceased to develop since the time of the humble Augustinian Abbot.

All of these men, by their patient experimentation, humility and firm belief in the rational ordering of the created world by God, demonstrate the scientific spirit at its best. For men such as Mendel and Kircher, the Church was in no way a hindrance to scientific inquiry but was an organization that served as a catalyst for inquiry and provided logical grounds for that inquiry by proclaiming a rational God who created rational things that could be discovered by unchanging rational laws. It is no wonder that places like India and Tibet are not known for great scientific breakthroughs. How could they, when their religions stress a world that is purely illusory and bounded by no fixed principles? It seems that it is the Catholic Church’s teaching on the divine source of all truth that even makes true scientific progress possible.

Our list of Catholic contributors to scientific progress would grow to truly unfathomable depths if we were to add all of the advances made by monastic communities throughout the centuries: all the humble Benedictine brothers who gradually perfected the agricultural sciences, the rotund German monks whose experiments with hops and barley left the world with a treasure of immense value, the nameless laborers and architects who raised the marvels of Chartres and Notre Dame and developed architectural principles that still hold today, the monk Dionysius Exiguus whose studies in chronology gave us the BC/AD system used all over the planet. Nor are the popes themselves exempt from this list, who frequently were the patrons of Catholic scientists and who set up colleges and academies to promote scientific study. It should not be forgotten that the calendar in use in most of the world, the Gregorian calendar, was given by a pope, Gregory XIII in 1582. In the history of almost every branch of science, we find clerics, monks and popes laying the groundwork for everything that was to come afterwards. However much the atheistic elites of the scientific community may dislike it, the fact is that they have been a tiny little minority in the wave of scientific progress that has been churned up by the great Catholic scientists of the past.