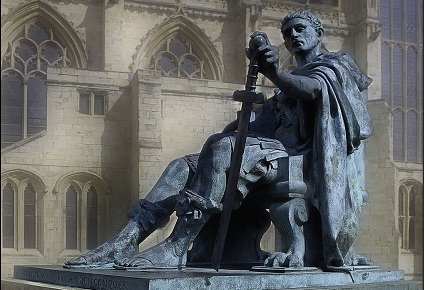 The Emperor Constantine is one of the most enigmatic figures in western history. Whether one lauds Constantine as the founder of the Christendom or laments his reign as the beginning of “those awful dark ages,” it is undeniable that his reign was a turning point. Approaches to Constantine were muddled even in his own day; Eusebius of Caesarea, the emperor’s friend and biographer, paints him as a good and holy ruler who reigned with the blessing of God, but omits any reference to the emperor’s darker side, such as his killing of his wife and son.

The purpose of this article is not to speak about Constantine the man, but to examine how historiographical depictions of Constantine have changed over the years. Each generation has tended to come up with its own interpretation of what Constantine means. Let’s take a look at how this important emperor has been viewed.

Of course, we must begin with Eusebius of Caesarea, Constantine’s biographer, whose Life of Constantine, written shortly after the emperor’s death in 337, established the standard sketch of a Christian monarch that would hold up for the duration of the Middle Ages, inspiring future royal biographies, such as those of Clovis by Gregory of Tours, Charlemagne by Einhard, and Louis IX by Joinville. In Eusebius’ biography, the emperor does the will of God, and by his pious prayers and supplications, calls down God’s blessing on his kingdom, which prospers in direct proportion to the holiness and piety of its ruler. This is the view presented by Eusebius and is in keeping with the biblical traditions associated with such pious kings as David, Solomon, and Hezekiah. This was generally how Constantine was viewed within the Catholic world throughout the Middle Ages.

The first deviation from this view—at least in Catholic circles—did not come until 1852 with the publication of Jacob Burckhardt’s book The Age of Constantine the Great. In this book, Constantine was presented almost as a Machiavellian opportunist. Constantine’s adoption of Christianity was a move calculated solely for political purposes, as the emperor saw the Church as the only institution capable of strengthening the failing empire. Burckhardt depicted Constantine as a powerful, ruthless man who joined the Christians only because he could not beat them. The decision was purely political and intended to strengthen his empire via Christianity. It ought to be pointed out that Burckhardt was a close friend of Nietzsche and a believer in the German Will to Power theory, which influences his political commentary. Burckhardt offered many theories about Constantine’s motives but brought forth no evidence to dispel Eusebius’ contention that Constantine’s motives were sincerely religious. Burckhardt’s thesis, though based on the philosophy of Schopenhauer and not methodical by today’s standards, has become the standard vision of Constantine favored by secular modernity (e.g., Constantine’s Sword by James Carroll).

The French archaeologist André Piganiol (1883–1968) proposed that Constantine was a confused syncretist, a barely literate peasant who was unable to understand the difference between competing religious claims. He was a “muddled man” who groped his way along as best he could, not certain of what he was doing or what Christianity really professed. But is this really fair? Constantine was a very able general and emperor who certainly understood what he was doing in making war and administering the empire—why must we assume he was confused in religious matters?

Throughout the 1920’s and 30’s it was common for Constantine to be portrayed either as Piganiol’s misguided bumbler or as Burckhardt’s ruthless Machiavellian. But in the 40’s and 50’s, what medieval historian Norman F. Cantor describes as a “pious reaction” set in. The English Byzantine historian N.H. Baynes in the late 40’s portrayed Constantine as a sincere and devout Christian hero.

Bu the pivotal modern work on Constantine came from the French historian J.S. Palanque who popularized a theory of the three stages of Constantine’s conversion.

According to Palanque, the first stage was pagan monotheism of the Unconquerable Sun (Sol Invictus), which Constantine inherited from his father. This was followed by a second stage characterized by a vague belief in a purely spiritual deity, which Constantine seems to have adopted sometime around 310. This led the way for the third stage, his full acceptance of Christianity after the Battle of the Milvian Bridge in 312. Thereafter Constantine is a full and true Christian, though admittedly somewhat superstitious and not capable of understanding theological subtleties. This interpretation gives full credence to Eusebius’ statements about Constantine’s piety but, by emphasizing the gradual nature of his conversion and admitting his obvious shortcomings, allows room for a sober assessment of his dark side as well. Most medieval historians consider Palanque’s view to be the best yet presented.

Whatever we think of Constantine, he proved himself to be a man of unique vision and admirable skill. His efforts preserved the western empire for another century and laid the groundwork for another millennium of life to the eastern empire. True, his understanding of Christianity was never very sophisticated, but he believed himself to be a devoted Christian and his actions undoubtedly laid the foundation for the emergence of the Christian middle ages.