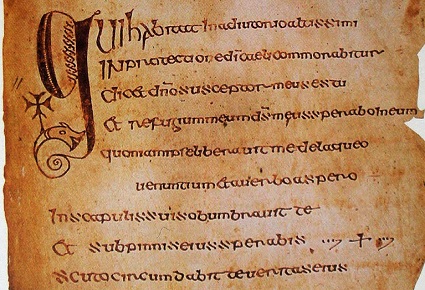 The Cathach of St. Columba is the most renowned and ancient relic of the Church in Ireland. Associated with the famous St. Columba (521-597), one of the Twelve Apostles of Ireland and the founder of Scottish Christianity, the Cathach is a vital link connecting us to the golden age of Irish Christianity.

The Cathach is a psalter containing at present 58 folio pages containing Psalms 30:13 through 105:13. The text is the Gallican version of the Latin Vulgate. The document has been dated to around the late 6th century and is believed to have been written by the hand of Columba himself. It is the second oldest Latin manuscript in Ireland, and the second oldest Latin psalter in the entire world.

Given its antiquity, the Cathach stands as one of the patriarchal texts of medieval illuminations, crafted right at the dawning of the practice. It is written in something called Insular script, a monastic handwriting that developed in Ireland and was an influence upon the later Carolingian miniscule. Compared to later illuminated manuscripts, the decorations in the Cathach are scarce, limited to the first letter of each psalm (the drop-cap M on the back cover of this book is taken from the Cathach). Each of these first letters is written with a thick black stroke decorated with trumpet and spiral patterns, in addition to a design known as guilloche, the intricate, repetitive patterns Celtic art is known for. Unfortunately, the front page and many other pages of the psalter have been lost. The entire psalter was written by a single scribe; the thick downstrokes and thin horizontals suggest the scribe used an edged rather than a pointed quill. If the tradition is to be believed—and the dating of the artifact suggests no reason why it should not be—then we are looking at the very handwriting of St.  Columba himself.

The word Cathach means “Battler.” This refers to the extraordinary way the Irish used this document. At some time early in its history, the Cathachcame into possession of the Clan O’Donnell of County Donegal, the old royal family of Tír Chonaill. The O’Donnells carried the Cathach into battle, using it as a rallying point, as well as a relic believed to grant protection and victory to O’Donnell armies. The Cathach was borne into battle according a specific ritual: it could only be borne by a monk or holy man of the Clan McGroarty; its bearer had to be sinless and have a reputation for holiness; the Cathach was enclosed in a special leather satchel known as a tiag (and later in a box called a cumdach) and attached to the neck of the bearer; the bearer then processed in a circle around the O’Donnell troops three times before battle. The Cathach was in continuous use by the O’Donnells until 1497, when its keeper Mac Robhartaigh was slain in the Battle of Bealach Buidhe, near Boyne.

Sometime between 1062 and 1098 the Cathach was enclosed inside a special box called a cumdach. The cumdach of the Cathach is an oblong hinged wooden box, decorated with bronze and gilt-silver plates with mounts holding glass and crystal settings. The sides of the cumdach feature Ringerike decorations, a style of Viking art reflecting the Norse influence in Ireland in the latter first millennium. In the late 14th century, a new face was made in gilt repoussé depicting Christ enthroned flanked by a scene of the crucifixion on the right and an image of St.  Columba to the left.

After the O’Donnells lost the Cathach at the Battle of Bealach Buidhe the relic changed hands several times before finding its way back to the Clan O’Donnell in the person of Daniel O’Donell (1666-1735), a captain in the army of King James II of England who later became a Brigadier-General in the Irish Brigade of France. Daniel O’Donnell had special devotion to the Cathach, believing in its powers and traditional associations with the Clan O’Donnell. In 1732, while O’Donnell was in Paris during his service in the French army he had extensive repairs made to the Cathach by French artisans. Shortly after this, O’Donnell fell ill. Knowing death was approaching, he deposited the relic inside a silver box and entrusted it to a Belgian monastery with strict instructions that the sacred object should only be handed over to him who could prove himself chief of the O’Donnells.

There it remained for over sixty years until 1802 when Sir Neale O’Donnell, 2nd Baronet of Newport House, County Mayo, was able to claim the Cathach. It was returned to Ireland, and Sir Neale’s son, Sir Richard, donated the Cathach to the Royal Irish Academy in 1842. Unfortunately, the Cathach and cumdach were separated shortly thereafter, the cumdach going to the archaeology department of the National Museum of Ireland while the Cathach itself remained in the Royal Irish Academy. Until 1920, the leaves of the Cathach were stuck together, but the painstaking work of researchers at the British Museum separated them, allowing them to be read for the first time in centuries. Further restorations were carried out in 1980-81.