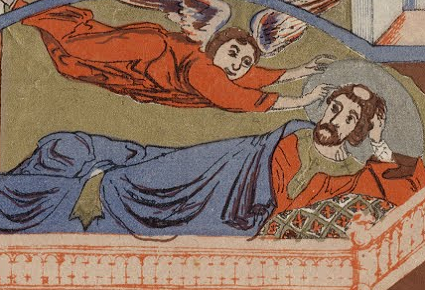 St. Aubert was Bishop of Avranches in Normandy, during the latter Merovingian period and was active during the reign of Childeric III. Aubert is best known for founding the monastery of Mont Saint-Michel, one of the most renowned monasteries of Christendom. According to legend, Aubert had a vision of St. Michael commanding him to build a monastery on the rocky tidal island at the mouth of the Cousenon River. But Aubert ignored the warning, questioning whether the vision was authentic. Sometime later Michael appeared to him again, once again commanding a monastery be built on the island and again Aubert vacillated. Finally the Archangel appeared again, touching Aubert’s head and burning hole in the bishop’s skull with his finger. This stunning manifestation of divine power roused Aubert to heed Michael’s directive. The Church was dedicated in 709, where Aubert was later buried. A skull with a hole in the top reputed to belong to Aubert is still on display in the monastery. His Feast Day is on September 10.