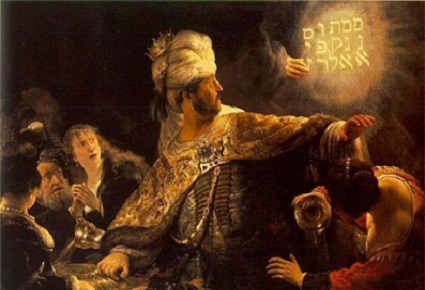 Of all the books of the Bible, perhaps none has suffered so many attacks from the historical critical school as the Book of Daniel. Virtually every story in the book has been derided as a fanciful post-Exile invention. The composition of the book is usually dated from the Maccabean period, while Daniel, Shadrach, Meschach, and Abednego are regarded as nationalist myths, ancient Israelite versions of Paul Bunyan and Rip Van Winkle.

The Jewish protagonists are not the only characters in the book to suffer such abuse; the Babylonian king, Belshazzar, is commonly held to be a mere fable. The reason for this is rather simple: the Book of Daniel says that Belshazzar was the last King of Babylon and that he was killed the night the Persians took the city after the famous incident of the handwriting on the wall. Ancient historians, however, are very clear that a ruler named Nabonidus was the last King of Babylon. This Nabonidus was captured alive by the Persians, not killed. Thus Belshazzar has been a poster-child for the biblical skeptics who gleefully point to the clear contradiction between secular history and Scripture as proof of the Bible’s historical unreliability.

What the Scriptures Say About Belshazzar

The Book of Daniel states clearly that at the time Babylon fell, the kingdom was being ruled by one Belshazzar, the “son of Nebuchadnezzar.” Scripture states several things about Belshazzar:

“Belshazzar the king made a great feast for a thousand of his nobles: and every one drank according to his age” (Dan. 5:1).“And being now drunk he commanded that they should bring the vessels of gold and silver which Nebuchadnezzar his father had brought away out of the temple” (Dan. 5:2).

“That very night Belshazzar, king of the Babylonians, was slain. And Darius the Mede succeeded to the kingdom” (Dan. 5:31).

Thus is all the Scriptures say about Belshazzar. From these passages we can see that Scripture affirms three things about Belshazzar: First, that he was indeed regarded as King of Babylon; second, that Nebuchadnezzar was his “father.” Finally, that he was the last king, as he was slain on the very night that the Persians took the kingdom. These three points are undeniably attested by Scripture, and calling to mind the teachings of Leo XIII, St. Pius X, and Benedict XV that Scripture is inerrant in everything it affirms—even historical facts—we must unhesitatingly affirm the veracity of the Biblical narrative. We shall now compare this with the testimony of the ancient historians.

The problem, ostensibly, is that the biblical narrative does not agree with what we know of Babylonian history, at least on its face. The history of the neo-Babylonian empire was well-recorded by ancient writers: Herodotus, Berosus, Abydenus, Ptolemy, Josephus, and Theodoret all composed histories on the Babylonians and Assyrians. None of them mention any king named Belshazzar; in fact, they all agree that the King of Babylon at the time the city fell was not Belshazzar (whom they all fail to mention), but one Nabonidus, a son-in-law of Nebuchadnezzar. The ancient historians all agree that the succession of the neo-Babylonian empire ran thus:

It was during the reign of Nabonidus that the city fell to the Persians, and Nabonidus was taken into captivity by Cyrus the Persians in 539 B.C. Neither Herodotus nor Josephus nor any of the others mention anybody named Belshazzar. This led the early biblical skeptics of the Enlightenment and post-Enlightenment German critical school to attack the historicity of the Book of Daniel.

This haughty dismissal of the narrative in the Book of Daniel was upturned by the discovery of the so-called Nabonidus Cylinder in 1854. The artifact is a large clay cylinder, discovered amidst the ruins of Ur by British archaeologist J.G. Taylor and recording the deeds of King Nabonidus; later cylinders of Nabonidus were discovered in Sippar in 1888. In total, four cylinders were recovered, all depicting the activities of Nabonidus as the Babylonian Empire teetered towards collapse.

It is in the 1854 cylinder that we see the first extra-biblical reference to Belshazzar. In this cylinder, Nabonidus prays to the moon-goddess Sin that his son may be faithful to her cult:

“May it be that I, Nabonidus, king of Babylon, never fail you. And may my firstborn, Belshazzar, worship you with all his heart.” (1)

This reference proved the existence of Belshazzar definitively. But this was insufficient to establish the biblical narrative, the skeptics argued, as the Book of Daniel also claimed that Belshazzar was the last King of Babylon, and we know for a fact that Nabonidus was the last king. This had puzzled Christian scholars prior to the 1850’s; some had tried to posit that Belshazzar was another name for Nabonidus, or attempted other means of reconciling Berosus and Herodotus with Daniel.

Other cylinders in the collection shed light on this mystery. One passage describes how Nabonidus left Babylon for a campaign for an extended period of time and entrusted the government of Babylon to Belshazzar:

“[Nabonidus] entrusted the army to his oldest son, his first born, the troops in the country he ordered under his command. He let everything go, entrusted the kingship to him, and, himself, he started out for a long journey. The military forces of Akkad marching with him, he turned to Temâ deep in the west.” (2)

It seems that Nabonidus, though technically King of Babylon, was absent from his kingdom for an extended period and left the reins of power in the hands of his son, Belshazzar. This complements the ancient historians well, for all agree that Nabonidus spent almost ten years of his reign in the Arabian oasis city of Tamya due to conflicts with the Marduk priesthood within Babylon. Thus, like Richard the Lionheart, Nabonidus was an absentee monarch who preferred to entrust actual rule to his son, just as Richard ruled through the agency of John his brother. The only difference between Richard/Nabonidus and John/Belshazzar is that, unlike John, Belshazzar was actually invested with the plenitude of royal authority during this time; hence the cylinder says he received “the kingship”; in Akkadian,  šarrûtu, which means “kingship” or “royal power.”

This is not surprising since co-regency was common in the ancient world; students of western civilization are familiar enough with it from the examples of the ancient Spartan kings, the dual Roman consulate, and later, the practice of having multiple emperors (Marcus Aurelius and Lucius Verus, for example). In the ancient Semitic kingdoms it was not unheard of either; the founder of the neo-Babylonian dynasty, Nabopolassar, had shared power with Nebuchadnezzar, his son. There is no cultural or historical objection why Belshazzar should not rightfully be called “King of Babylon.” He was a co-regent with Nabonidus, just as Galerius was a co-Caesar with Diocletian. Nevertheless, because Nabonidus was the father and Belshazzar the son, Nabonidus is given pride of place in all the king lists.

We need not be troubled by this. Expressions of family relation in Semitic cultures are much looser than they are in the west. We see this elsewhere in the Bible. For example, in Genesis, Abraham and Lot are called brothers even though Lot is Abraham’s nephew; Jacob is called the brother of Laban even though he is his nephew. The Pharisees call Abraham their “father” even though he lived 1,800 years prior to their own age. All kings of the House of David are called “sons of David” regardless of how far removed from David they are; St. Joseph and our Lord Jesus Christ are both called “son of David”, meaning nothing more than that they are of the house of David.

Thus, taking into account what we know from the Book of Daniel and the pagan historians, the following is the probable sequence of events leading up to the seizure of Babylon by the Persians:

• King Cyrus of Persia defeated Nabonidus in battle outside the city.
• Nabonidus fled. He later surrendered and Cyrus spared his life.
• The Persians besieged Babylon, then under the control of Belshazzar, who was ruling as titular king alongside with his father.
• Belshazzar, thinking himself safe behind Babylon’s famous triple-walls, did not bother with a spirited defense, but instead feasted and made merry as he was wont to do.
• The Persians, however, diverted the Euphrates, causing the water-level in a culvert to drop. This allowed them to wade through waist-deep water into the city, and surprised the defenders.
• The city was taken without a fight. Surprised and caught in a scuffle in the palace, Belshazzar was slain.

This sequence of events is consonant with the histories of Berosus, Herodotus, et al., is faithful to what we know of Nabonidus and Belshazzar from the Nabonidus Cylinders, follows the narrative of the Book of Daniel, and is not at all implausible.