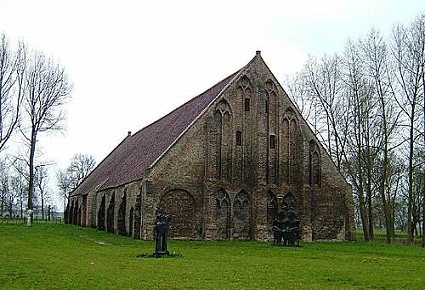 St. Thorfinn is one of the most obscure of all medieval saints for several reasons: Thorfinn lived and labored Norway, one of medieval Europe’s most remote outposts of Christianity. He worked during a particularly fractious time in Norwegian political and ecclesiastical history, one from which not many records survive. Thorfinn’s obscurity is also due to the fact that he is known of primarily by a poem written by the Flemish monk Walter de Muda. Thus not much is known about St. Thorfinn save the barest outline of his life and deeds, which we shall here attempt to reconstruct.

The Finding of the St. Thorfinn’s Body

Our story begins not in Norway but in the Cistercian monastery of Ter Doest outside Bruges, in Flanders, around the year 1335. In the course of some renovations being done by the Abbot of Ter Doest, a certain tomb was opened which was found to contain remains that gave off a strong, pleasing odor. Believing he may have found the body of some saint, the Abbot inquired of all his monks to see if anyone knew the identity of the body. Nobody could tell him anything about it, until a very old monk named Walter de Muda was consulted. Walter said the tomb belonged to one Bishop Thorfinn, a Norwegian bishop who had come to stay at the monastery and died there some fifty years earlier, around 1285.

The Abbot asked Brother Walter if he knew anything about Thorfinn. Walter replied that he had conversed with Thorfinn and knew much about his story. In fact he had composed a poem about Thorfinn on the occasion of the latter’s death and entombed it with the bishop. The Abbot sent some workmen to the tomb and easily retrieved the poem of Walter, written on parchment and still in good condition. The poem praised the virtues of Bishop Thorfinn, presenting him as a man of prudence, wisdom, holiness, and resignation to the will of God. The Abbot took this a sign that God wished the memory of Thorfinn to be preserved and asked Brother Walter to write down everything he could remember about the bishop.

The Life of St. Thorfinn

All we know of St. Thorfinn comes from Walter de Muda’s recollections. According to Walter, Thorfinn was born in Trondhjem and was a Cistercian monk in the important Abbey of Tautra, located on an island in the Trondheim Fjord on the western coast of Norway. He was eventually ordained to the priesthood and served as a canon in Trondhjem’s Cathedral of Nidaros. His time here as a canon is verified by the 1277 Tønsberg agreement between King Magnus VI and Archbishop Jan Naude confirming some privileges of the clergy, where the name of Thorfinn appears among the witnesses to the charter. Shortly after this, Thorfinn was made Bishop of Hamar, north of Oslo.

Thorfinn’s episcopal reign would not last long, however. In the reign of Magnus’ successor Erik (Erik II Magnusson, the “Priesthater”), the agreement of Tønsberg was repealed. A persecution of the leading clerics in the kingdom followed, with several archbishops exiled and ecclesiastics being forced to choose between loyalty to the king and Church. The details of Erik II’s conflict with the Norwegian Church are sketchy, but it appears that Erik’s repudiation of Tønsberg was part of a campaign to subordinate the Church to state control.

Bishop Thorfinn dutifully sided with the Church over the demands of the king. He was soon compelled to leave his see, whether voluntarily or by a decree of exile is unknown. St. Thorfinn left Norway by ship for Flanders, and—after being shipwrecked and facing many other hardships—made his way to the Cistercian monastery in Ter Doest in Flanders. Ter Doest had connections with the church in Norway and received Thorfinn lovingly. Once safe at Ter Doest, Thorfinn recounted the tale of his struggles with Erik II and his flight from Norway to the Cistercians there. Among his admiring listeners was the young Walter de Muda.

St. Thorfinn’s exile did not last long. As Erik II only came to power in 1280, St. Thorfinn could not have been at Ter Doest longer than four years. Another tradition says he also visited Rome after his exile before coming to Ter Doest. St. Thorfinn fell ill and died on January 8, 1285. According to Walter de Muda’s recollection, St. Thorfinn divided all of his temporal goods between his mother, his brothers and sisters, and certain monasteries, churches and charities in his diocese, though after his hardships he did not have much left. Nevertheless, he remained a generous and forgiving man till the end, steadfast in his pursuit of good and opposition of what he believed to be evil. He was entombed in Ter Doest.

While Walter de Muda was composing the life of St. Thorfinn, rumors of his reputation for sanctity spread and the monks of Ter Doest began praying at his tomb. Miracles began occurring. The cultus of St. Thorfinn was soon approved and a Feast Day set for January 8th. Though his name was inserted into the universal calendar, devotion to him remained strongest among the Cistercians.

Though living a century after the close of the continental Investiture Controversy, St. Thorfinn deserves to be lumped in with other great saints of the Investiture Controversy period, men such as St. Anselm and St. Thomas Becket who suffered persecution and exile from kings seeking to dominate the affairs of the Church of Christ.

The Abbey of Ter Doest, along with the remains of St. Thorfinn, were destroyed by the Calvinists in 1571. Only the tithe barn of Ter Doest Abbey remains, which is pictured above.

St. Thorfinn, pray for us!