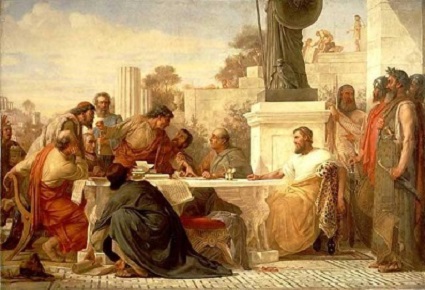 The Roman Emperor Julian the Apostate (r. 361-363) is most notable as the last pagan emperor of the Rome. As nephew of Emperor Constantine and cousin to Emperor Constantius II (r. 324-361), Julian is remembered for his apostasy from the Church in which he was raised, and his embrace of paganism as a means to restore the faltering fortunes of the Roman Empire. Although Christianity was by Julian’s time too large and well entrenched to be eradicated by means of a hard persecution, Julian nevertheless attempted to curb the influence of Christianity by removing Christians from important imperial posts, by forbidding them employment as educators, using state revenue to restore the ancient pagan priesthoods, and writing public invective against the Christian faith. For this reason, Julian is remembered as a persecutor of the Church, even though the nature of his persecution was quite different than those of earlier centuries.

What is not so widely known about Julian is one of the methods he used to attack the Christian religion was the same that the Founding Fathers of the United States would later hail as a blessing of freedom—the concept of religious liberty.

In the ancient Roman Republic, it was presumed that the good of the state could only be secured by the right worship of the gods of the state. And this did not primarily refer to private devotion (many sorts of cults were tolerated in ancient Rome); rather, it referred to the corporate worship sanctioned by the state. This is why the most important religious rites were carried out by clerics who were also part of the state apparatus. It was not only men individually but the state corporately that was expected to placate the gods. This concept was not unique to Rome; it was found throughout every ancient society. So long as a creed did not exclude participation in the official cultus of the state, it could be tolerated. Exceptions were sometimes made for religions of extreme antiquity (such as the Jews), but otherwise Roman subjects were expected to participate in paying homage to the state gods of Rome.

Contrary to popular belief, Constantine did not replace paganism with Christianity; that is, he did not make Christianity the “official” religion of the empire. Rather, he elevated it to the status of a legal religion with his famous Edict of Milan. He merely made it one of many allowable religions. But he was certainly not indifferent to Christianity. Though Constantine allowed the traditional paganism of the empire to continue, Christianity was patronized and subsidized substantially during the long reigns of Constantine and his son. By the time Julian took the throne in December, 361, paganism was in notable decline.

Thus when Julian took the throne and made known his predilection for paganism, Christians feared there would a return to the status quo prior to the Edict of Milan. Julian, however, adopted a different strategy: one of religious liberty. This pagan historian Ammianus tells us that as soon as Julian became emperor, “he laid bare the secrets of his heart and with plain and final decrees ordered the temples to be opened, the victims to be brought to the altars, and the worship of the gods to be restored” (1).

Nevertheless, ostensibly to set the minds of Christians at ease regarding these edicts, he announced a policy of religious liberty. As evidence of his good intentions, he recalled all the orthodox bishops that had been exiled by Constantius, who had favored Arianism. But after this, Ammianus tells us that he summoned the most notable Christian ecclesiastics—both orthodox and heretics—to the imperial palace:

“[Julian] summoned to his palace the Christian bishops, who were at odds with each other, and the people, who also were divided into factions, and politely advised them to set aside their differences, and each without fear or opposition to observe his own beliefs” (2).

But as we have seen, Julian had no love for Christianity and took other measures to actively undermine it. What, then, was his rationale for restoring exiled orthodox bishops, granting broad religious liberty, and encouraging the bishops of various sects to get along with one another in peace?

Ammianus tells us that Julian’s intention was to weaken Christianity through encouraging sectarianism. He knew that Christianity claimed to be a universal religion, and that the faith of Christians was weakened by sectarian discord. How, then, could he promote sectarian discord? The easiest way was to grant broad liberty to all Christian sects indiscriminately, such that they undermined each other. Ammianus says:

“In order that he might have no fear thereafter of a united populace, because such a freedom increased their dissentions, and he knew from experience that no wild beasts are so hostile to mankind as are most Christians in their savage hatred of one another” (3).

We do not know what the effect of Julian’s policies would have been in the long run, as he died after a very brief reign of about a year and a half. His successors, all firm military men of orthodox convictions, established orthodox Christianity as the official religion of the Roman Empire.

We mentioned above that this concept of religious liberty was the very same idea hailed by the Founding Fathers and modern constitutional conservatives as the saving grace of Christianity in the United States. However, in the case of Julian the Apostate, we have seen this concept was applied to undermine Christianity, not support it. Ironically, the same is true in the case of the doctrine of religious liberty as proposed by the Founding Fathers, whether they knew it or not.

Modern religious liberty, as practiced in the United States at least, owes its legal origin to the Deist Enlightenment writer John Locke (1632-1704). In his Essay on Toleration, Locke advocated a broad religious liberty for all sects and opinions. But, as in the case of Julian, there was a sinister motive behind this liberty. While religious liberty might be good for smaller religious sects to flourish, it also has the effect that no one sect that grow large enough to disturb the state. In other words, the freedom of sects to multiply will ensure that the traditional ideal of one, universal Christian Church can never be realized. In the amendments to the second edition of his essay, Locke states:

Men united in religion have as little and perhaps less interest against the government than those united in the privileges of a corporation. This I am sure: they are less dangerous as being more scattered and not formed into that order. And the minds of men are so various in matters of religion, and so nice and scrupulous in things of an eternal concernment, that where men are indifferently tolerated, and persecution and force does not drive them together, they are apt to divide and subdivide into so many little bodies, and always with the greatest enmity to those they last parted from or stand nearest to, that they are a guard one upon another, and the public can have no apprehensions of them as long as they have their equal share of common justice and protection. (4)

Let us also consider the analysis of Peter Leithart, in his article “Limits of Toleration”, which appeared in First Things on February 11, 2009. Leithart noted that Locke is hardly the apostle of toleration some would like to make him:

Even if the opinions themselves are tolerable, there is a danger that too many people will begin to hold opinions that isolate them from the general public. People have the tendency to attach themselves to fellow believers more strongly than to fellow citizens. Magistrates have to put a stop to these things too: “When . . . men herd themselves into companies with distinctions from the public, and a stricter confederacy with those of their own denomination and party than other [of] their fellow subjects, whether the distinction be religious or ridiculous matters not, otherwise than as the ties of religion are stronger, and the pretenses fairer and apter to draw partisans, and therefore the more to be suspected and the more heedfully watched.” When a sect like this becomes numerous, it is “convenient” for the magistrate to do what he can “to lessen, break, and suppress the party, and so prevent the mischief.”

Quakers are tolerable because they are few, but “were they numerous enough to become dangerous to the state,” they “would deserve the magistrate’s care and watchfulness to suppress them.” Magistrates should act even if Quakers are “no other way distinguished from the rest of his subject but by the bare keeping on their hats.” Hats are a “very indifferent and trivial circumstance,” yet too many people wearing the same hat might “endanger the government” and thus it is his duty to “endeavour to suppress and weaken or dissolve any party of men which religion or any other thing hath united, to the manifest danger of his government.”

Not that this is an attack on religion, or a limit of toleration of worship and speculative opinion. Not at all: “they are not restrained because of this or that opinion or worship, but because such a number, of any opinion whatsoever, who dissented would be dangerous.” (5)

Locke, like Julian the Apostate, is concerned with religious liberty insofar as it is a means to keep the Christian Church from unifying in any meaningful sense. Modern Christians, especially in the west, may be confused on what to think of the foundational American doctrine of religious toleration; but the enemies of Christianity have never been.