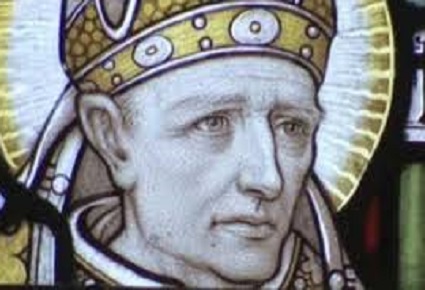 It seems somewhat unjust to group St. Cuthbert amongst the sancti obscuri of the Anglo-Saxon period since he was renowned all over the kingdom during his life; Cuthbert has actually been called one of the most popular of all English medieval saints. Unfortunately, like many other Anglo-Saxon saints, Cuthbert’s notoriety slowly faded after the Norman invasion and his cultus died out after the Dissolution of the Monasteries, though it could be argued that his renown never truly faded in the immediate vicinity of Northumbria, where he was that region’s official patron.

St. Cuthbert life (634-687) is recorded in Bede’s Ecclesiastical History of the English People, Book II, Chapters 27-32. Bede tells us that Cuthbert began his monastic vocation under the direction of St. Eata of Hexham, who instructed him in the Scriptures, and also of St. Boisil, Abbot of Melrose, where he began his monastic training.

During his time at Melrose Cuthbert led a very active life, traveling into the wild Northumbrian countryside to preach in the remote villages, St. Bede telling us that he preferred those that were especially inaccessible and squalid. Wherever he went crowds gathered to hear his preaching, and Bede, though he doesn’t strictly say so, infers that Cuthbert may have been graced with the gift of reading hearts, as he states that none of who came to him for confession could hide even the smallest sin but willingly came forward and poured out everything. Bede tells us that he would be gone for weeks at a time, sometimes more than a month, on these journeys. We could thus draw a parallel between these expeditions and those of the “traveling priests” in the frontier days of our own country.

Cuthbert eventually removed himself to the remote Farne Islands (676), which lie nine miles of the coast of Northumbria. There he built for himself a small hut, chapel and subsistence farm where (after one year of a failed harvest) he grew barley in the second year. He surrounded his hermitage with a massive wall of earth so that he could see nothing but the sky above and there lived in blissful solitude for many years.

In 684 there was a regional Synod at Twyford which was called for the purpose of seeing to the administration of the Church in Northumbria, which had grown to such a degree that the diocese had been split in 678. The bishopric of Hexham had fallen vacant (as St. Eata was at that time Bishop of Lindisfarne). The king and the local church unanimously chose Cuthbert, though when they traveled out to the Farne to inform him of his election, he refused to leave is hermitage. It was only King Egfrith and a very large group of clerics came to the Farne and all knelt before him, imploring him in God’s name to take up the bishopric, that he consented.

Cuthbert, however, was not familiar with the diocese of Hexham and instead arranged to take over Lindisfarne, which he had known since youth, and Eata transferred to Hexham. Cuthbert served as a model bishop for only two years. In 686 he took ill and returned to his hermitage on the Farne, where he died the same day as his beloved friend Abbot Herefred (20 March, 687). He implored his followers to bury him on his island retreat, but shortly before death consented to burial in Lindisfarne Abbey. His tomb was the site of many miracles, some of which were recorded by St. Bede and are especially noteworthy since, unlike the tales of many of medieval miracles, Bede conducted thorough research into them by personally interviewing those who were the objects of Cuthbert’s wonder-working, many of whom were still alive at the time Bede wrote his history.