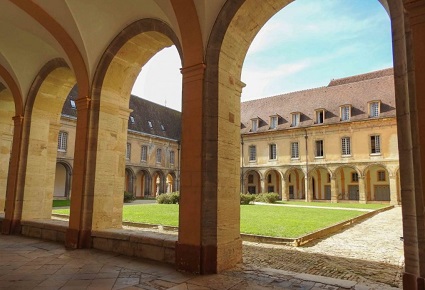 In the year 910, Duke William of Aquitaine did something which was relatively common for a 10th century noble: He founded and endowed a monastery. In the rich and verdant lands of Burgundy, the Benedictine monastery of Cluny was established under circumstances not unlike those that typically surrounded the founding of a medieval abbey. But Cluny was different from all other monasteries in one major respect: whereas every monastery was typically subservient to a lay potentate who ultimately had control over its affairs, William, motivated by extraordinary piety, established Cluny as an independent monastery with no temporal lord. William even exempted himself from this authority, placing Cluny under no earthly ruler save the theoretical authority of the Pope. This practical independence of Cluny led to a great freedom of thought and devotion to holiness as the monks, freed from the need to pander to temporal lords, threw themselves into their vocation with holy recklessness. Ironically, the ability of the monks to operate free of temporal concerns led to a transformation of medieval civilization at the hands of the Cluniacs. In this article, we will look at four ways the Cluniac movement Christianized feudal society.

Improving the Condition of Serfs

In the first place, we must mention the great humanity and justice with which the Cluniac abbeys treated their serfs. It is common knowledge that serfs were tied to land in the middle ages, and that their lords could be either lords temporal or lords spiritual. Those serfs who happened to live on the lands under the management of the Cluniac abbeys were exceptionally fortunate. In an age when most lay barons regarded serfs as little more than mere instruments or slaves, the Cluniacs viewed them as fellow workers in field and forest and treated them with great justice. Thus Peter the Venerable writes, “We exercise the same authority as the seigneurs, but we make a different use of it…our serfs are regarded as brothers and sisters.” (1) This infusion of the feudal system with a Christian ethos would spread to all of Christendom in the 12th and 13th centuries via the chivalric code, which prescribed that the upper classes should protect and defend the rights of the poor, rather than exploit them. Of course the ideal was not always the reality, but the Cluniac movement did push for a more humane treatment of serfs and did serve as the catalyst for improvements in the lot of the landed peasants in the 12th and 13th centuries.

Second, and related to the first, the Cluniac monks worked hard to instill Christian ideals into the minds of the feudal barons. In the 10th century, the Anglo-Celtic and Gallo-Frankish barons were still not too many generations removed from heathenism, and though they professed the faith of Christ, their blood was still eager for war and spoil, thus making early medieval life subject to constant violence and retaliation. The Cluniacs tried reining in these violent tendencies by the Peace of God and Truce of God movements, in which we find an attempt to elucidate certain human rights that are possessed by people at all times. In the Truce of God, clerks, peasants, merchants and all non-combatants are declared protected classes, against whom violence is not permitted; even the animals are peasants are set aside for protection. Religious buildings and public buildings are not considered licit objects of sack and plunder, and the right of sanctuary within a church is to be respected. In the Peace of God, hostilities must be suspended between Wednesday evening and Monday morning during all of Advent, Lent and the Emberdays, as well as on the principal holy days and octaves. Whereas the reform in treatment of serfs attempted to Christianize medieval feudalism, the Truce of God and Peace of God attempted to humanize warfare. The results were mixed; few feudal barons were willing to restrict their combat to specific days of the week, but the movements spearheaded by Cluny did begin to sketch out a general concept of non-combatants, an idea foreign to the ancient world and the barbarians of the early medieval period. By the latter medieval period, the general protection of non-combatants was generally acknowledged, though sometimes more in theory than practice.

Third, Cluny introduced religion into the concept and ceremony of chivalry. Medievalist Maurice De Wulf wrote, “Once the knight came into contact with Christian morality, he was no longer an egotistic, ambitious, and brutal warrior; he learned to be loyal and generous; he became a born defender of the Church, the champion of the weak, the opponent of violence. Whenever conferences were called to discuss peace, the monks urged charity and forgiveness upon the nobles, who frequently repented in tears; or, indeed, the very men who had pillaged on the previous day would forthwith set out on long pilgrimages to St. James of Compostella or to Rome or Jerusalem to expiate their crimes. ..The union of the martial spirit with the religious, and the alliance between the feudal system and the Church became indissoluble.” (2)The proponents of the Crusades were all Cluniacs; Urban II was himself a Cluniac monk.  The ceremonies and customs of the peerage became Christianized, and the concept of the knight as imitation Christi, that perennial ideal of Christendom, was born out of the Cluniac movement, which was the first voice in Christendom to insist that the martial spirit of the barons be bounded by a chivalric code and harnessed to the service of God and the Church.

Reform of the Secular Clergy

Finally, we must mention the reform of the secular clergy led by the Cluniacs. Cluniac preachers condemned the scandal of married priests and bishops and worldly ecclesiastics, who lived like feudal barons. They also labored strenuously to free the bishops from the patronage of the feudal lords, proclaiming that bishops ought to be elected by the churches and confirmed by the pope. Thus the great push-back of the Church against the lords known as the Investiture Controversy was born out of the Cluniac as the monks protested against simony, breaches of celibacy, and the practice of lay investiture—these issues would become the battle cries of the Gregorian reformer a century later; Pope St. Gregory VII had been a monk of Cluny, and Cluny is intimately connected with the general triumph of the Church in the conflicts with the German Emperors in the 11th, 12th, and 13th centuries.

Conclusion: “A Hymn to Civilization”

In 1910, at the gathering which celebrated the millennial founding of the monastery, learned men from the West gathered at the famous site to commemorate and glorify the work of the Cluniacs. One of them declared “We are come to Cluny to sing a hymn to civilization”, and he was not exaggerating; much of the core concepts of high medieval civilization and of the West in general were born inside the walls of Cluny. (3) If there is one point in the history of the Church to which we can point and confidently single out as evidence that one individual or small group can make a real difference, it is Cluny.