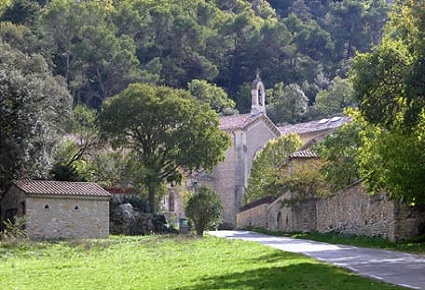 St. Gens du Beaucet (1104-1127) was a medieval French hermit-saint who lived during the early 12th century, a time of extraordinary piety known for many lay saints. Gens was a commoner by birth and came from a farming family in the rustic districts outside Carpentras. Even so, he had a very sensitive soul and was very perceptive to the things of God.

As a young man, he was angered by the superstition of the locals of Monteux, who were accustomed to dipping a statue of St. Raphael the Archangel upside down in the River Ricaveau for rain. When he tried to prevent this superstitious practice, the villagers mocked him and threw stones at him. Saddened, Gens decided to leave the village to take up the life of a hermit and do penance for poor sinners. With nothing but two cows given to him by his father, St. Gens settled down in the ruins of an old monastery at a place called Beaucet. From the time he left the village, a drought settled over the region that endured for three long years.

After three years of penance and drought, his mother came to the valley in tears pleading with him to return to civilization and to end the drought. Moved by the tears of his mother, he agreed to return with her to Monteux after miraculously quenching her thirst with a fountain that flowed from his hand. The local priests organized a procession to welcome the return of the holy youth, and as he returned to Monteux the clouds broke and the rains began to fall. St. Gens was reconciled to the people of Monteux.

Nevertheless, he quickly tired of life of the world and returned to the ruins of Beaucet, where he died not long after on May 16, 1127 at the tender age of 23.

The place of St. Gens’ burial became a place of pilgrimage, and the annual May pilgrimages to Beaucet are the oldest in Provence. They are organized by the lay Brotherhood of St. Gens (established in 1671). He has been invoked especially against droughts, and massive processions are attested in 1436, 1442 and 1487 in prayer for rain.

The Brotherhood continues to organize these pilgrimages to this day, which always occur on May 16.