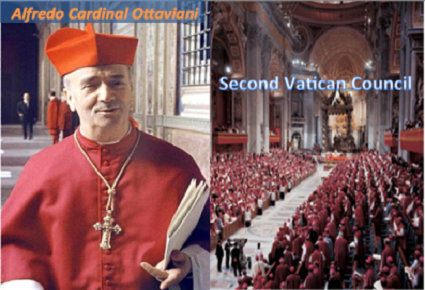 In the years leading up to the Second Vatican Council, Pope John XXIII entrusted the preparation of the documents that would be discussed by the Council to a Preparatory Commission, headed by the venerable Cardinal Alfredo Ottaviani (1890-1979). The Preparatory Commission ended up drafting a total of nine schemas on a variety of topics. It was these schemas that would be rejected by the Council Fathers as excessively rigid, condemnatory in tone, and too “Scholastic” in style. The majority of the documents were rejected in favor of what have gone on to become the sixteen documents of Vatican II.

Until recently, we in the English speaking world had no way to assess the alleged inferiority of Ottaviani’s original schemas; we had to simply take the word of the Council Fathers and periti. Thankfully, however, in 2012 a priest of Marquette University, Fr. Joseph A. Komonchak, laboriously translated six of the nine schemas into English. We are happy to link Fr. Komonchak’s excellent translations below.

Five of the nine schemas are available, with expansive footnotes and helpful commentary by Fr. Komonochak. The original Vatican II schemas available in English are:

On the Sources of Revelation (De fontibus revelationis)

Defending Intact the Deposit of Faith

On the Christian Moral Order

On Chastity, Marriage, the Family and Virginity

Dogmatic Constitution on the Church

On the Blessed Virgin Mary, Mother of God and Mother of Men

In reading these original schemas, one is struck by their clarity, their directness, and, relative to the subsequent conciliar documents, their brevity. It is also interesting to see how these documents are notably different from the documents that were eventually promulgated. For example, “On the Sources of Revelation” states very plainly that there are two sources of revelation which constitute a single deposit of faith; Dei Verbum, on the other, is emphatic that there is but one source of revelation which is passed on in two “modes of transmission.”

The source material is interesting as well. The footnotes of the discarded schemas reveals an abundant number of citations from Pascendi, Mortalium Animos, the Syllabus and even the anti-Modernist oath, none of which are cited in the 1992 Catechism of the Catholic Church, for example.

The tone is markedly different from the final conciliar documents; instead of the humble “searching for truth” (1) that we note in the conciliar documents, the original schemas lucidly and authoritatively proclaim the truth, as well as about the errors which pervert it. De fontibus revelationis, subject to so much scorn by the Council Fathers, issued several formal condemnations. In order to see the difference in tone between the two sets of documents, consider the first as passage from the schema “On the Christian Moral Order”, paragraph 6:

[The Church] grieves, however, that many people are transgressing the divine law, more from weakness than from wickedness, though rarely without grave guilt. It notes with great horror that errors are being spread everywhere, errors that open the way to perdition and close the gate of salvation. There are those who deny a personal God and so deprive the natural law of its foundation; there are those who, repudiating the mission of Christ, reject the law of the Gospel; there are those who rely only on human principles in explaining the moral order and therefore rob it of its genuine and ultimate obligation and sanction…Their impiety and impudence reach such a point that they attempt to assault heaven and to remove God himself from the midst. With notorious wickedness and equal foolishness they are not afraid to state that there is no supreme, most wise and most provident God distinct from the universe; there are those who maintain that the moral law is subject to changes and to evolution even in fundamental matters…”

Now compare this with a parallel passage from Gaudium et Spes chapter 21, also dealing with atheism:

The Church calls for the active liberty of believers to build up in this world God’s temple too. She courteously invites atheists to examine the Gospel of Christ with an open mind.”

When the Council got underway, the progressive Council Fathers saw the schemas of Ottaviani as an obstacle to their program of reform. Cardinal Bea, one of the more influential Cardinals and a favorite of Pope John XXIII, explained to his progressive colleagues:

We must help the Holy Father achieve his goals for the Council, the ones he expresses in his radio messages and in his exhortations. These are not the same as those of the schemas, either because the Theological Commission, which directs them, is closed to the world and to ideas of peace, justice, and unity, or because of the division of the work and a lack of co-ordination. They’ve made room for everything except the Holy Spirit. (2)

Thus, these schemas, which were ‘closed to the world’, were replaced with what we currently have, the defects of which we are all painfully aware. As they were never adopted, these schemas have no authority; but in reading them, one cannot help but contemplating the council that might have been.

We do not know when and if the other three schemas will be translated by Fr. Komonochak, but we will post them here if they become available.