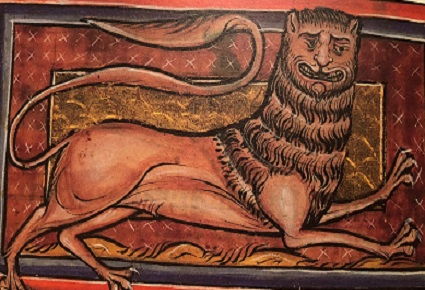 For medieval Christians, zoological knowledge about the animal world came from a genre of texts known as bestiaries. Bestiaries were compendiums featuring descriptions (and often illustrations) of a variety of animal life. Entries included a few natural observations—usually drawn more from hearsay and legend than fact—followed by moral and allegorical lessons on what each animal represented. They thus provided a means to draw spiritual lessons from the natural world.

The medieval bestiaries tell us a great deal about the leopard, sometimes called simply the “pard.” The symbolism of the beast is of unruly passion, both in terms of its bloody instincts, and also its origin, which is described as “adulterous.” The English Oxford Bestiary manuscript of the 14th century (Bodleian 746) describes the leopard thus:

The pard is a mottled beast and very swift, thirsty for blood; if it pounces, it kills. The leopard is born of an adulterous match between a lioness and a pard, from which a third kind of beast is born, as Pliny says in his Natural History: a lion can mate with a female pard, and a male pard with a lioness, and from both matings comes a degenerate creature like a mule or an ass. (1)

Given the leopard’s association with blood thirstiness, adultery, and “degeneracy”, it is no surprise the medievals saw it as an allegory for the powers of darkness. The spots of the leopard’s coat become signs of wickedness, even of Antichrist. The Bestiary says:

The mystic pard signifies either the devil, full of diversity of vices, or the sinner, spotted with crimes and a variety of wrongdoings. Hence the prophet says, ‘Can the Ethiopian change his skin, or the leopard his spots?’ [Jer. 13:23] Antichrist is known as a pard, spotted with many kinds of evil, in the Apocalypse: ‘And the beast which I saw was like unto a leopard’ [Rev. 13:2]; the same has been said of those who persisted in the blackness of sins and a variety of wrongdoing. (2)

The leopard is not irredeemable, however. While it generally denotes sinful passion by virtue of its spots, in its more docile moments it can symbolize a sinner who has come to penitence. The Bestiary makes this connection in a meditation on the famous passage from Isaiah about the wolf and the leopard laying down with the lamb:

Elsewhere it is written, ‘The wolf also shall dwell with the lamb, and the leopard shall lie down with the kid’ [Isa. 11:6]. And this was accomplished in Christ’s coming, when they who had previously been fierce lived with the innocent, and those who were spotted with wrongdoings were converted through repentance to the true faith. (3)

The leopard at rest thus recalled the peace made possible by the sacrifice of Christ, by which “they who had previously been fierce” were able to put aside the sins that “spotted” their soul and live in the newness of life. The animal was a sign both of bestial sin as well as repentance from such sins.