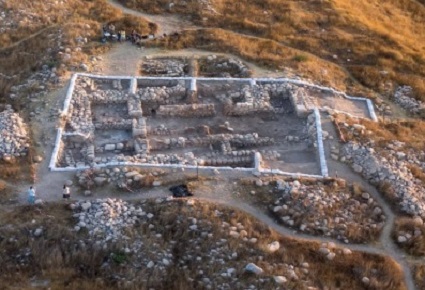 While direct archaeological or epigraphic evidence of David and Solomon from the period of the united monarchy has yet to be discovered, recent excavations in the Judean highlands point to the presence of a large, centralized Israelite power. These are the strongest indicators of a united kingdom as described in the Old Testament. Several sites in the highlands point to the existence of a united monarchy in Judea.

The Site of Tel Eton

One of the most interesting sites associated with the united monarchy is Tel Eton. Tel Eton is located about 30 miles outside of Jerusalem. Archaeologists have identified it as the biblical city of Eglon, as mentioned in the Old Testament: “This was the portion of the tribe of the Judites by their clans…Lachish, Bozkath, Eglon” (Joshua 15:20, 39). According to the Bible the city was originally inhabited by the Amorites but was allotted to the clan of Judah after the conquest. Tel Eton is a 15-acre site strategically situated at a juncture where an ancient north-south road connected the Beersheba Valley with the Ayalon Valley and where several east-west roads connected the coastal plain with Mount Hebron (1).

Recent digs at Tel Eton, overseen by Professor Avraham Faust of Bar Ilan University, have uncovered a sprawling town dominated by a large, walled fortress. The scope of the ruins suggests that Tel Eton was the third largest city in Judah, after Jerusalem and Lachish. The ruins date from around the year 1000, the period of the Davidic kingdom. The fortress at Tel Eton is laid out on something called the “four room style“, which is characteristic of Israelite construction. It was a very well constructed structure, using ashlar masonry (the same sot used at the so-called ‘Solomonic Gates’ at Hazer and Megiddo). The size and complexity of the fortress suggests it was some sort of administrative center; Professor Faust has hypothesized it may have been the seat of some kind of governor.

A governor in service of whom? Though the site is not specifically linked to David, it definitely demonstrates a period of transition from a Canaanite culture to a Judean culture in the highlands of Judah.  In other words, it establishes the presence of an organized, administrative Israelite state in the highlands during the Davidic period. Does this “prove” the existence and reign of David? Not exactly, but Professor Faust inks the implications are clear and leave few other options:

Until and unless epigraphic references to David are discovered dating from the 10th century, the strongest archaeological support for the existence of the Davidic monarchy are finds like these at Tel Eton and Khirbet Qeiyafa, which demonstrate the existence of a complex, centralized Israelite government in Judea in the 11th-10th centuries BC.

Currently, the oldest reference to King David comes from the Tel Dan Stele, dating from 870 BC and the reign of King Omri of Israel.