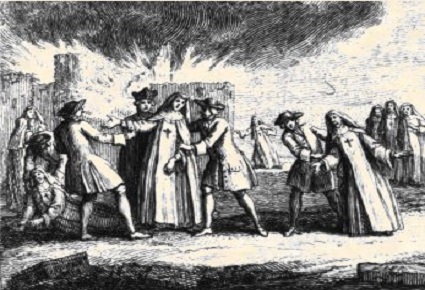 Jansenism is a difficult heresy to categorize. What began as a theoretical dispute about grace transformed into a very practical argument on the powers of the papacy to understand and proscribe certain errors in the works of theologians, conceived of as an argument about the difference between matters of faith and fact. From a historical perspective the disputes over matter of right and matter of fact are of greater interest than the actual content of the Augustinus and the doctrines of the Jansenists. In this essay, we shall follow up our previous entry in the series with a study . As this is the second installment in a series, it is recommended you read the first article, “The Origins of Jansenism,” first.

The Convent of Port-Royal

The Jansenists maintained sustained opposition to ecclesiastical authorities for many decades. They could not carried on their dissent for so long had it not been for the unique pool of polemical and literary talent centered on the convent of Port-Royal, which became the Jansenist stronghold in France. Port-Royal, just on the outskirts of Paris, was founded in 1204 as a convent of Benedictine nuns. Discipline at the abbey declined during the age of the religious wars; during the reign of Henry IV, the rank of abbess was even bestowed on an eleven year old girl!

In the early 1600s, however, the convent took up the post-Tridentine spirit of reform and adopted the strict observance of the Cistercian rule. The number of nuns went from 12 to 100 and the pope, at the behest of the king, removed Port-Royal from the jurisdiction of Citeaux and placed it under the authority of the Archbishop of Paris. The nuns became known for their piety, and many lay persons of every class began to set up cottages and temporary homes outside the Port-Royal convent to breathe the same air of piety as the nuns. Nobody, even the most vehement opponents of Jansenism, deny that a genuine spirit of piety pervaded the convent.

It is therefore quite unfortunate that in 1633 the nuns adopted as their patron and spiritual guide one Jean du Vergier de Hauranne, Abbé de Saint-Cyran. The Abbé de Saint-Cyran happened to be the best friend and first promoter of Cornelius Jansen; the two had been in seminary together and he had encouraged in latter in his composition of the Augustinus. In addition to the typical Jansenist views on grace, the Abbé de Saint-Cyran also taught that perfect contrition was necessary for salvation, rejecting the Church’s teaching that imperfect contrition (also called attrition) would suffice. Under the leadership of the Abbé de Saint-Cyran, the nuns gradually adopted the Jansenist heresy and Port-Royal became a center of Jansenism for the next three quarters of a century, attracting great minds like Pascal to their community, but also most of the snobbish intelligentsia who saw dissent from ecclesiastical authority as a mark of high society.

In the wake of the Jansenist dissent from the formulary of 1665, Louis XIV inaugurated a fierce wave of political repression against the Jansenists—some were exiled to distant parts of the kingdom, all Jansenist schools were closed, some leaders were imprisoned, the nuns were forbidden to profess novices or admit new novitiates; several nuns were displaced and moved to other convents. All adherents to the movement were banned from court, and some Jansenist leaders, under force, were compelled to sign the formulary of 1665, which contained a repudiation of five condemned propositions taken from the Augustinus. It was this persecution (which lasted until around 1669) that led Pascal to compose his famous Lettres Provinciales, attacking the moral formation of the Jesuits and attempting to exonerate the Port-Royalists.

The Port-Royalists were aided by four recalcitrant French bishops who refused to sign the formulary of 1665 and who openly opposed both the pope and King Louis XIV in his suppression of the Jansenists. Louis threatened to deprive them of their temporalities and increase the political persecution on the Jansenists. Fearing a general breakdown of the situation, Pope Clement IX sent his nuncio Pietro Bargellini to Paris to assess the situation and work out some sort of satisfactory solution to the impending schism. Bargellini worked tirelessly with the French foreign minister Hugues de Lionne (successor to Cardinal Mazarin) to come up with a compromise that would satisfy both parties. The result was what came to be known as the Peace of Clement IX or the Clementine Peace.

That the peace was a compromise, nobody denies. Yet, it was a compromise that Clement IX deemed acceptable in the face of what could become a full-blown schism. According to the terms of the peace, Jansenist bishops would agree to sign the formulary of 1665 without reservation. In exchange for their signatures, the pope spared them the humiliation of having to publicly renounce their errors. In other words, the Holy Father allowed them to simply sign their assent to the formulary without formally recanting anything on the understanding that they would maintain a respectful silence on the controversial propositions. The nuns of Port-Royal were also included in this amnesty.

The Problem of “Respectful Silence”

The peace endured for a generation, but it had one serious flaw: it was not defined what “respectful silence” looked like. Clement IX assumed that since the bishops had signed the formulary, the permitted silence was a gesture allowing the French bishops save face by not having to humble themselves publicly. The pope had assumed that the bishops had in fact rejected Jansenism internally and did not interpret the permitted silence in any other way. The Jansenists, on the other hand, interpreted the permitted silence to mean that though they had signed the formulary out of obedience, they were still free to internally dissent on these points so long as they did not make their views known publicly.

The controversy broke out again in 1701 when a case was sent to the Sorbonne inquiring whether or not the peace of Clement permitted a man to sign the formulary while dissenting internally, as the Jansenists had supposed. The Sorbonne theologians ruled in favor of the Jansenists, leading the pope, now Clement XI, to issue a severe condemnation of their opinion in 1705. In this opinion he accused the Sorbonne theologians of rashness and a desire to revive the controversy. Louis XIV concurred with Clement, except that he found in Clement’s condemnation some statements that the king felt curbed the rights of the French clergy too stringently (a reference to the other controversy of the age, that of “Gallican liberties”). Clement, not wanting to take on Gallicanism and Jansenism at the same time, reissued a new bull Vineam Domini Sabaoth in July, 1705, which while saying nothing on Gallican liberties, condemned the “respectful silence” of the Jansenists in the following terms:

[T]he respectful silence, by which the Jansenists sought to dispense themselves from condemning, internally, the sense of the Augustinus, as heretical, was only a deceitful veil to cover error, instead of renouncing it…By respectful silence, a person did not satisfy the obedience, due to the apostolic constitutions, against the book of Jansenius; but that all the faithful of Jesus Christ should condemn the propositions as heretical; and reject, not only by mouth, but also with the heart, the sense of the book of Jansenius, condemned in the five propositions; and it is declared to be unlawful to subscribe the formulary of Alexander VII with any other mind or sentiment. (Vineam Domini Sabaoth).

As an aside, this bull is a good source to go to when talking with progressives who claim the Church allows willful internal dissent so long as the dissent is not given public voice. Clement XI clearly says it is not so.

The bull was registered by the French parliament and accepted by the clergy of France. Yet the Jansenists tried to make yet another distinction to avoid submission: The bull, they argued, had not decided the issue. They readily admitted that respectful silence was not true obedience when it concerned matters of faith; but the real question, as the Jansenists put it, was whether respectful silence was sufficient when dealing with matters of fact. The bull had not addressed this issue, and therefore the Jansenists said they were in the right to continue their dissent on the issue of whether or not the condemned propositions actually occurred in the Augustinus. One wonders, if the Jansenists fought so hard to claim that the condemned propositions were rightly condemned but not found in the Augustinus, what propositions were they fighting for?

Louis XIV was extremely irritated and renewed the persecution, this time centering on the nuns of Port-Royal. The authorities came with carriages to disperse the nuns to different convent and the abbey itself was demolished. The grounds were turned up, gardens demolished and even the bodies of the dead dug up and removed. The physical center of Jansenism had been destroyed, although many of the Jansenist clergy and their supporters remained obstinate.

We’ll conclude this series on Jansenism next time with a history of the controversies surrounding the bull Unigenitus.