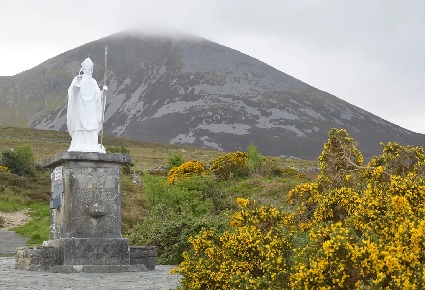 According to various lives of St. Patrick, the great Apostle of Ireland retreated to the summit of a desolate peak called Cruachan-Aighle in County Mayo on the Saturday before Ash Wednesday in the year 441. Patrick spent his entire Lent upon the peak, weeping for the sins of men and begging God to grant to him a certain number of souls for heaven. After suffering demonic attacks in the form of black birds, Patrick was visited by an angel sent to negotiate Patrick’s demands on God’s behalf. What followed was reminiscent of Abraham’s negotiations with the Angel of the Lord for the lives of the men of Sodom and Gomorrah, as related in the Book of Genesis. Due to the perseverance of St. Patrick’s prayers, he is able to obtain some amazing concessions from God on behalf of Ireland, concessions that, as far as I know, have never been granted to any other saint. The location of these marvelous visions has subsequently been known as Croagh Patrick.

Upon reading this extraordinary encounter, we can readily see how much of a mystic and lover of souls St. Patrick was: his weeping for the souls of men, his insights into the heart of God, his profound understanding and blazing vision of the spiritual realities that surround us. Let all Catholics keep this—the real St. Patrick—before their mind as a model intercessor and one of the greatest mystics of the early Church. We are happy to present this excerpt of St. Patrick’s Lent on Cruachan-Aighle from the Tripartite Life of St. Patrick. Sancte Patricius, ora pro nobis!

From the Tripartite Life of St. Patrick, Part II

Patrick went to Cruachan-Aighle [Croagh-Patrick] on the Saturday of Whitsuntide. The angel went to converse with him, and said to him: “God will not give thee what thou demandest; for He thinks the demands weighty and immense and great.” “Is that His decision?” said Patrick. “It is,” answered the angel. “This is my decision, then,” said Patrick: “I shall not leave this Cruachan until I die or all the demands shall be given.” Patrick was afterwards with illness of mind in Cruachan, without drink or food, from Shrove Saturday to Easter Saturday, just like Moses, son of Amra; for they were alike in many things. God accosted them both out of the fire; six score years was the age of each; the place of sepulture of both is uncertain. At the end of those forty nights and forty days the mountain around him was filled with black birds, so that he could see neither heaven nor earth. He sang cursing psalms at them, but they went not away from him. He then became angry with them; he rang his bell at them, so that the men of Erinn heard its sound. And he flung it at them, so that a gap was broken out of it, and that [bell] is Bernan-Brighte.

Patrick afterwards cried until his face and the front of his casula (cowl) were wet. No demon came after this to Erinn for the space of seven years, and seven months, and seven days, and seven nights.

“I will not depart,” said Patrick, “for I have been tormented, until I am gratified. Is there anything more?” asked Patrick. “Yes,” said the angel; “you shall have one man for every hair in your casula from pains on the Day of Judgment.” “Which of the other saints who labor for God,” said Patrick, “that would not bring that number to heaven? I shall not accept that,” said Patrick.

“What will you accept, then?” asked the angel. “Here it is,” said Patrick: “that I should bring from hell on the Day of Judgment seven persons for every hair in this casula.” “It shall be granted to you,” said the angel; “and depart from this Cruachan.” “I will not depart,” said Patrick, “for I have been tormented, until I am gratified.” “Is there anything else you demand?” asked the angel. “There is,” said Patrick: “the day that the twelve royal seats shall be on the Mount, and when the four rivers of fire shall be about the Mount, and when the three peoples shall be there—viz., the people of heaven, the people of earth, and the people of hell—that I myself may be judge over the men of Eriu on that day.” “This thing cannot be obtained from the Lord,” said the angel. “Unless this is obtained from Him, I will not consent to leave this Cruachan from this day for ever; and even after my death there shall be a caretaker from me there,” answered Patrick.

The angel went to heaven. Patrick went to his offering. The angel came in the evening. “How now?” asked Patrick. “Thus,” answered the angel: “all the creatures, visible and invisible, including the twelve apostles, entreated, and they have obtained. The Lord said that there came not, and would not come, after the apostles, a man more illustrious, were it not for the hardness of the request which is granted thee. Strike thy bell,” said the angel; “thou art commanded from heaven to fall on thy knees, that it may be a blessing to the people of all Eriu, both living and dead.” “A blessing on the bountiful king that gave,” said Patrick; “the Cruachan shall be left.”

If you are interested in learning more about the saints of Ireland, you may enjoy Cruachan Hill Press’s books The Life of St. Columba as Told by St. Adomnan, and The Life of St. Brigid by Cogitosus and Other Selected Writings.