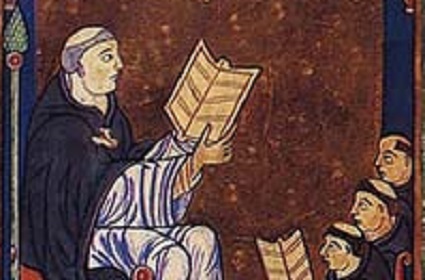 Saint Bernard wrote of him: “Now placed in heaven, he beholds God clearly, revealed to him, swallowed up in joy, but not forgetting us. It is not the land of oblivion in which Victor dwells. Heaven does not harden or straiten hearts but makes them more tender and compassionate; it does not distract minds, nor alienate them from us; it does not diminish, but it increases affection and charity; it augments bowels of pity. The angels, although they behold the face of their Father, visit, run, and continually assist us; and shall they now forget us who were once among us, and who once suffered themselves what they see us at present labor under? No: ‘I know the just expect me till you render to me my reward.'”

“Victor is not like that cup-bearer of Pharaoh, who could forget his fellow-captive. He has not so put on the stole of glory himself as to lay aside his pity, or the remembrance of our misery” (St. Bernard of Clairvaux, Sermon, 2)

St. Victory was born in Troyes, Champagne, France, sometime in the 7th century. Born of noble parents, St. Victor was educated under strict discipline in learning and piety. He was one of those rare creatures that was a saint from his cradle. In his youth, prayer, fasting, and alms-giving were his chief delights.

After embracing the priesthood, the love of heavenly contemplation was so alluring that he preferred retirement to the care of souls, and he dwelt as a hermit for many years in the region around Montiramy. This appears to have been God’s will for him. He lived in continual communion with God and God glorified him by many miracles, but the greatest appears to be the powerful example of his life.

Victor’s feast was celebrated by the Benedictines of Montiramy at whose request Saint Bernard wrote two pious panegyrics about Victor.

Saint Victor died at Saturniac, now called Saint-Vittre, in the diocese of Troyes. A church was built over his tomb but in 837 his relics were translated to the neighboring monastery of Montier-Ramoy, or Montirame